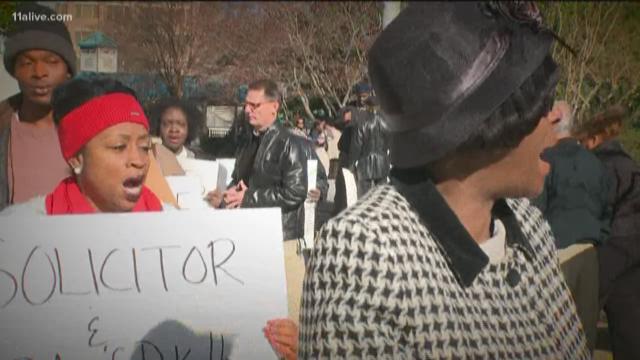 DECATUR, Ga. -- Domestic violence advocates gathered in downtown Decatur on Wednesday. They say domestic violence could happen on these streets or elsewhere around the metro area.

What they said they want to see across the board is more services for victims of domestic violence and stronger prosecution to keep them safe.

In front of the DeKalb County Courthouse with her grandchild by her side, Eugenia Terrell is here for her daughter, 22-year-old Tyrika Terrell, who was killed while working at a DeKalb County post office, in what police called a domestic violence situation.

"It is hard. It is hard," Eugenia said, sighing. "I believe in the Lord. He gets me through, but it is a constant struggle."

DeKalb County Police arrested and charged Quantez Tyre with Tyrika's murder. Tyre is her ex-boyfriend and father to her daughter.

Her family says there were past domestic-related issues her daughter had previously reported. But also, some that went unreported out of fear of retaliation.

"I want more people that are fighting in domestic relationships to report them," Eugenia said. "Especially young people."

To help victims talk about abusive relationships, Pastor Sabrina McKenzie with the National Taskforce Against Domestic Violence says work needs to be done to protect victims after they report incidents, and also to prosecute attackers.

"As a community, we have a problem," she said.

"I'm simply standing here with the community's support, saying that the system needs to change," she said.

Eugenia Terrell says she believes her daughter's death could have been prevented with better laws and resources in place.

"How do you love someone and they take your life," she asked. "How?"

Now, she wants to make sure her daughter did not die in vain.