DeKalb County and Doraville officials held a press conference to update citizens on the impacts the Buford Highway water main break will have on the community. 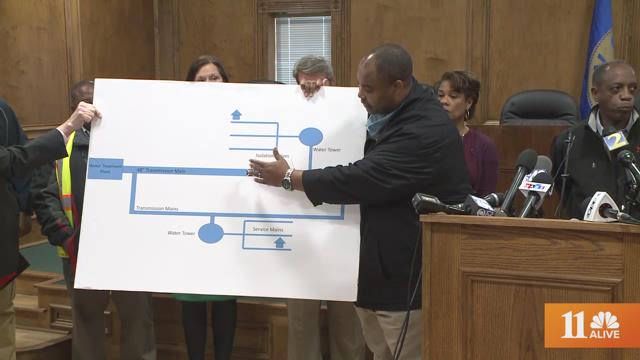 DORAVILLE, Ga. - A press conference held by DeKalb County and The City of Doraville officials updated citizens on when to expect water services to be restored as well as what happened to cause a major water main break on Buford Highway.

Overnight, crews working at the water treatment plant realized the demand on their high service pumps were growing, according to the Deputy Chief Operating Officer for Infrastructure, Ted Rhinehart.

A 48-inch ductile iron pipe had broken near 5718 Buford NE Highway early this morning. DeKalb Co. PD was on the scene at around 2:30 a.m. and at around 5:30 a.m. emergency operations centers opened.

So far, the cause of the break is still unknown.

When will services be restored |

According to DeKalb CEO Michael Thurmond, crews hope to get water restored within 24 hours and Buford Highway should be reopened before rush hour on Wednesday, March 7.

Thurmond says they hope to get services back 'as soon as humanly possible'.

Who will this impact |

There will probably be countywide issues but some areas may see lower pressure than others, it all depends on where you live.

There is 3000 miles of pipe throughout the county and less than 60 feet of pipe was impacted.

The businesses closest to the water main break will probably be impacted longer than the possible 24-hour repair mark.

How are they going to fix it |

Crews needed to isolate the length of broken pipe, which was achieved by 9:00 a.m. on Wednesday. Now, pieces are being ordered to replace the damaged pipe. Throughout the day, the water pressure will be monitored as repairs are being made.

A workaround has been created to isolate the broken section of pipe and will temporarily restore water pressure.

The pipe was about 20 to 30-years-old, which is relatively new compared to the rest of DeKalb County's infrastructure.

"Within 24 hours, we hope to stabilize the pressure within in the system. We've already had the area that's breached, isolated. Only those businesses within the isolation zone will fall outside of that 24-hour window."

There are approximately 20 team members working on the main break at this time.

A boil water advisory has been issued countywide as a precautionary measure as repairs are being made.

Another press conference will be held at around 4:00 p.m. on Wednesday to update parents on whether or not schools will be closed on Thursday, March 8.