Some residents say they're angry to be receiving fines and actual probation for code violations even as some city properties and sidewalks remain in shambles. 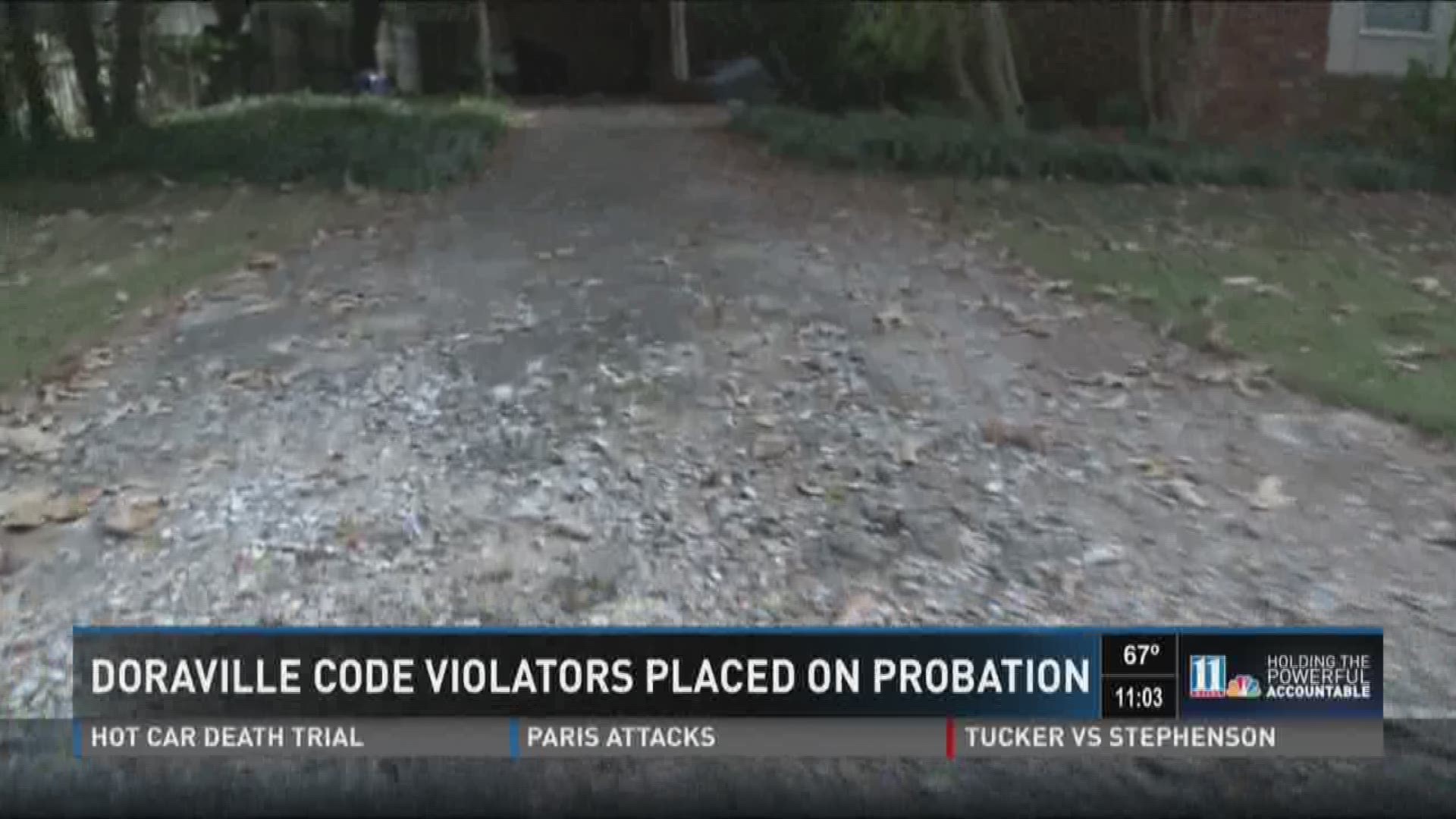 DORAVILLE, Ga. -- Homeowners in Doraville are on notice.

If they commit even a minor infraction of city codes on private property, they are facing 6 months on probation, and, potentially, jail time.

But some residents say the city is going too far.

To this day, Brucker doesn't know who complained to the city about her and her home, in the bucolic Northwoods subdivision of Doraville, where she has lived for 26 years.

Suddenly, someone doesn't like Hilda Brucker's driveway, and complained to Doraville Code Enforcement.

"My driveway is 60 years old. It's not very pretty. It's very functional," Brucker said.

Her sentence -- a fine of $100. And, "They gave me a six month probated jail sentence, so I now have a probation officer [because of] my driveway cracks."

Brucker said she never received the warning from the city, and the citation, that the city said were delivered to her.

She said she received a phone call in October, telling her to report to Doraville Municipal Court for failure to appear, and, she said, even then no one showed her a citation.

She thinks six months on probation is too harsh a penalty for a relatively minor code infraction.

She is finding out that she is not the only one protesting Doraville Code Enforcement.

Someone recently complained about Tim Snyder's Virginia creeper, which, in the 16 years he has lived in his home, has grown every summer on his front porch support posts.

Snyder, who also lives in Northwoods, said Code Enforcement ordered him to take down the vine, immediately, or else.

He said he had to prove to Code Enforcement that his vine is actually not in violation of Doraville's codes.

Then Snyder started taking photos of major code violations in Doraville -- such as abandoned, boarded up, fire-damaged houses, and businesses with piles of trash stacked high outside the buildings.

He began asking why the city isn't enforcing those violations -- including broken, dangerous city sidewalks, half-hidden under a layer of fallen, uncleared leaves; and dilapidated city-owned properties.

One of those city-owned properties is the unsightly, former house at the corner of New Peachtree Rd. and Park Ave. The siding is falling off, the paint is peeling badly and the structure is uninhabitable. And it is right across the street from the Doraville Municipal Courthouse where Brucker was sentenced to six months on probation for her driveway.

"I think that Code Enforcement are spending too much time on minor violations," Snyder said, "and not enough on violations that really do affect the citizens and homeowners of Doraville.... There are code violations out there that do affect property value and do affect people's safety. And we would very much like to see more enforcement in these areas."

Snyder and Brucker went to City Hall on Wednesday to speak with Mayor Donna Pittman, who was already meeting with other homeowners about code enforcement and other issues.

Mayor Pittman did not want 11Alive News at the meeting, and, according to Georgia's Open Meetings law, since there was no quorum of the City Council present, she could declare the meeting to be private.

City Manager Shawn Gillen told 11Alive News later that "after several decades of neglect" Doraville is in the midst of an aggressive campaign to fix city streets and sidewalks and properties -- city-owned and private, residential and commercial -- and the ramshackle building across the street from the courthouse is scheduled for demolition.

"In the past 3 years, we have re-paved more streets than we did in the last 10 years," Gillen said.

The tough penalties for infractions, he said, "up to $1,000 per violation, and the six-month probations, work to leverage people to come into compliance. Everybody gets treated the same... Our goal is compliance."

Mayor Pittman would not comment on specific cases like Brucker's, but she said most Doraville residents want Code Enforcement to get tougher – the toughest penalties allowed under the law even for first offenders committing the most minor of civil infractions.

"They feel like it devalues their property if everyone else is not having the upkeep that they think that they should," she said. "Whatever's in the ordinance is what they [Code Enforcement inspectors] usually charge people with, they're not out there creating things."

When asked if the city is going overboard in enforcing minor code violations Pittman said she didn't.

"I think our code enforcement does a very good job of enforcing what the council's wishes are," she said.

Hilda Brucker may challenge her citation and probated jail sentence.

"It's not even a misdemeanor, it's some kind of civil infraction, and, honestly, I don't think my driveway is the biggest problem in Doraville" that justifies potential jail time, she said.

But what she really wants from City Hall, she said, is "to stop treating citizens like criminals. And to work with people instead of against people."