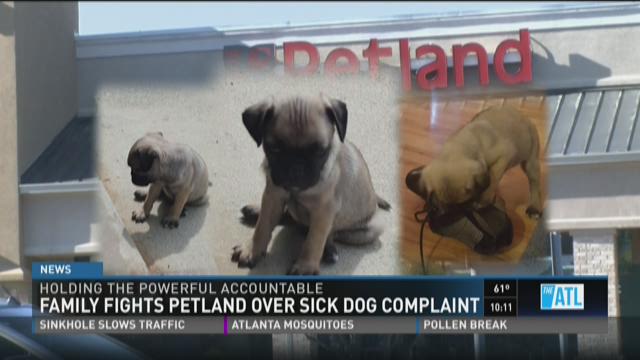 DUNWOODY, Ga. -- Just 48 hours after metro-area family took home a puppy from a Dunwoody pet shop, they say that same shop is to blame for their young puppy fighting for his life.

It all started when Edward Bouie bought a pug from Dunwoody Petland, but he says the 8-week-old puppy got sick almost immediately after he took him home. The family says the pet store knew this young pug was sick, and still sold the dog for $3,000.

“It really is outrageous,” Bouie said. “They're not even trying to do the right thing, and didn't seem a bit concerned that they had an infected dog in the store.”

Bouie says Winston was throwing up when he took him in for his first check up at the veterinarian Petland contracts with, but he says the vet didn't seem concerned.

“After all of that, the vet told me that she thought he was fine, that he was adjusting to a new environment,” Bouie told 11Alive’s Kaitlyn Ross.

When Winston still wasn’t well Saturday morning, Bouie tried to take him back to the same vet, but they told him they didn't have an appointment until late that afternoon.

Bouie says the dog is clearly in distress, and still has diarrhea, is throwing up and not eating. Worried Winston wouldn't survive, Bouie took him to an emergency vet where he was immediately diagnosed with a horrible case of Parvo, which attacks a dog's intestines.

“My puppy is totally isolated right now in a sterile area,” Bouie said.

Bouie bought the dog with a 21 day warranty, so he thought the cost of the vet bills would be covered. But he says Petland is refusing to pay because he's not using their preferred veterinarian.

On the phone, a Petland manager told 11Alive they want what's best for the dog, but they want him moved to their preferred veterinarian. They issued a lengthy statement that says in part that the "puppy was not demonstrating any signs of illness" at the time it was purchased and disputed that the veterinarian "did not refuse to see the puppy, as was suggested."

The statement goes on further to say that the Petland store manager asked to have the puppy transported from the emergency clinic to their consulting vet's office.

Bouie said he did not think it was safe, and he was not willing to risk his dog's life.

“If these folks had even shown some empathy and some willingness to discuss this with me -- I'm reasonable, I would have discussed it,” he said. “These people totally blew me off! “

Bouie says his next stop is his attorney.

Read the full statement from the Dunwoody Petland below:

“The pug puppy, Winston, was sold on Thursday, March 24th, to Edward Bouie and his wife. The Bouies took him to All Creatures Animal Hospital, Petland's consulting veterinarian, the following day for his free checkup from Petland. The puppy was not demonstrating any signs of illness at that time.

On Saturday, according to the customer, Winston began exhibiting signs of illness so the Bouie contacted Petland's consulting vet. They did not refuse to see the puppy, as was suggested. The representative explained they did not have an open appointment but the puppy could be brought in if it was an emergency and they would see it.

The Bouies instead opted for an emergency vet clinic and stopped by the Petland store to let them know the puppy had Parvo. The store was very sympathetic to Mr. Bouie and immediately the store manager followed protocol and contacted the consulting vet to make arrangements to treat and care for Winston.

Petland's store manager asked the customer several times to transport the puppy from the emergency clinic to their consulting vet's office so Petland could take care of all of the treatment. She even offered to transport the puppy herself. Mrs. Bouie insisted that the emergency vet told her the puppy was not well enough to change vets and that it would 'kill the puppy'. Petland suggested the two veterinarians communicate with one another to figure out the best course of action for the puppy.

Petland's store manager spoke with Petland's consulting vet, Dr. Akins, at All Creatures. Dr. Akins said the emergency vet did not advise the customer the puppy could not travel. The emergency vet told Dr. Akins the puppy was well enough for transport and they would get the puppy ready. Petland offered to assist. Petland then called Mrs. Bouie to relay they would get the puppy ready for transport. Mrs. Bouie became irate and refused to authorize the puppy to be transferred. Petland again explained that they would cover all the bills if the puppy was brought over to their consulting vet, as was explained in the warranty the customer signed.

The customer has never presented any bill to Petland or had any discussion about the costs associated with treating the puppy. The customer signed a warranty that described the health coverage and Petland has been trying to assist the customer and the puppy. Puppies are baby dogs with developing immune systems and unfortunately, like human babies, can sometimes get sick, even when all precautions are taken. This is why Petland offers an extensive warranty. Parvo can take 7-10 days to incubate so it can go undetected, with no one at fault.

The Petland store in Dunwoody, Georgia is independently owned and operated. Each Petland store has its own consulting veterinarian who checks the health of the pets weekly and establishes protocol in the store.”