Registered Duval County voters are showing opposition to the RNC coming to Jacksonville, levels of concern over COVID-19 and a trend of police distrust. 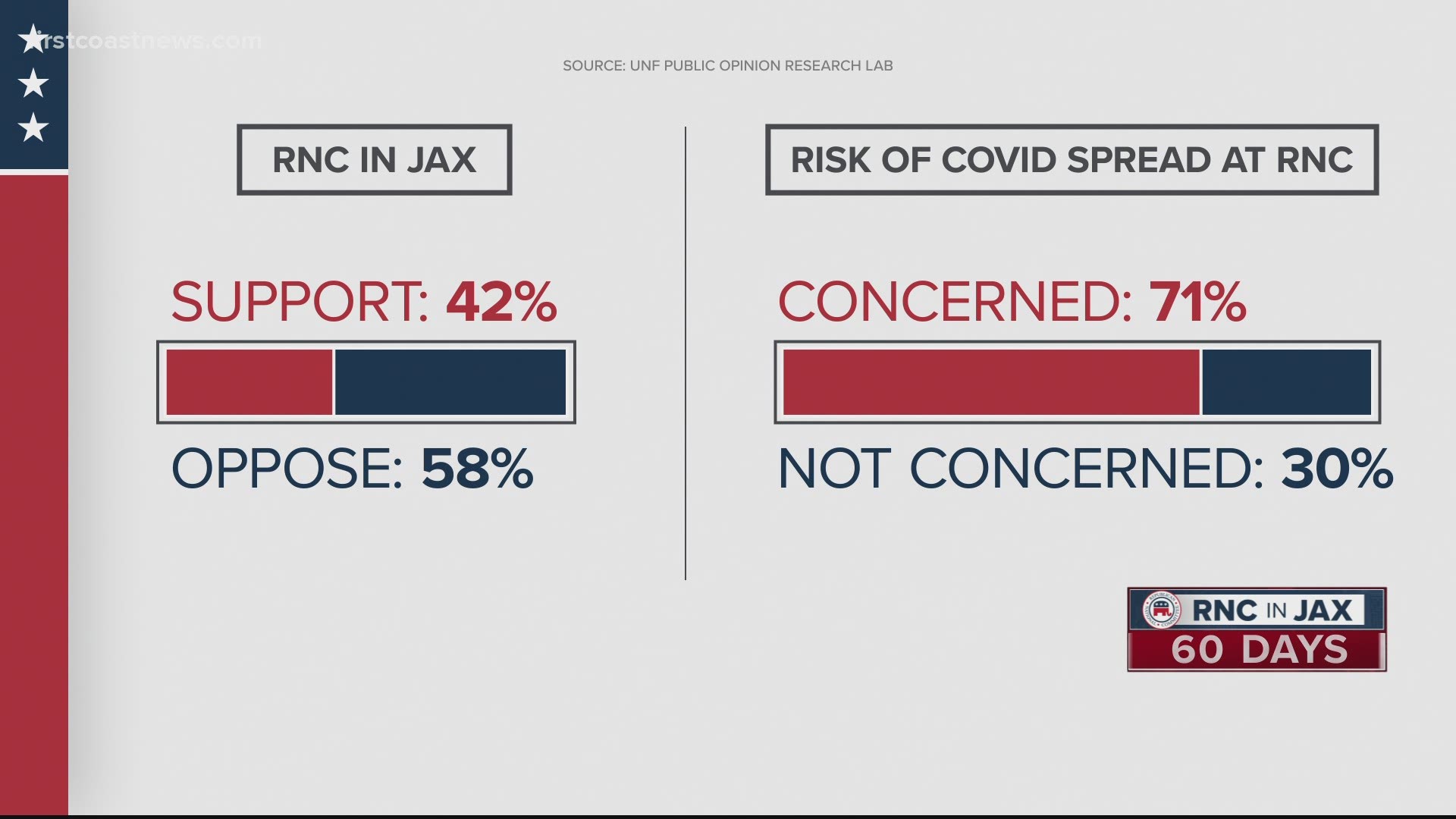 Some Duval County voters are showing opposition to the decision to host the Republican National Convention in Jacksonville, according to a new poll by the University of North Florida Public Opinion Research Lab.

This could have a trickle-down effect on how voters feel about local leadership, coronavirus precautions and a slew of other things according to researchers.

The poll, released Wednesday morning, not only surveys public response regarding Republican National Convention but also deals with a number of other issues including race relations, the approaching presidential race, local and national leadership approval ratings, a ½ sales tax for Duval County Public Schools and COVID-19.

According to the latest numbers, a relatively large segment of the surveyed population doesn't trust the police to do the right thing more often than not.

Read: See the results of the full survey by clicking here 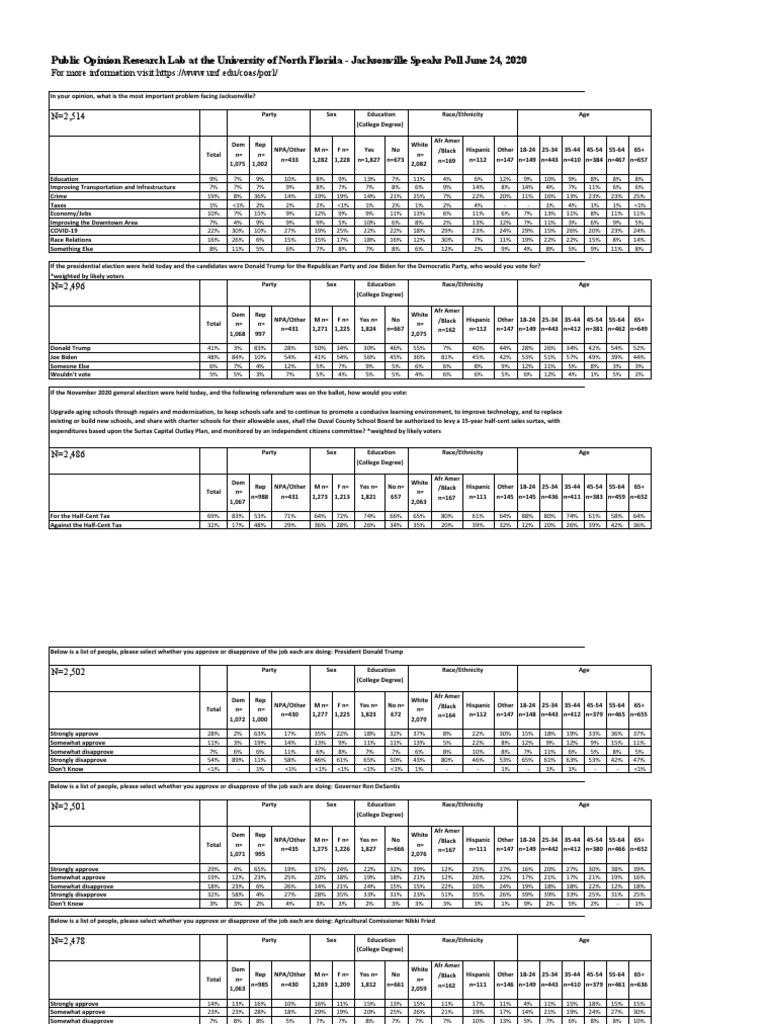 Survey director Dr. Michael Binder said the numbers are cause for concern.

“No person or public agency is perfect; however, it is worrisome that such a relatively large segment of the population does not trust the police to do the right thing more often than not.”

Recent police-related deaths around the country have stemmed a broad movement to promote justice for people of color. Approval of non-violent protests and demonstrations in Jacksonville is high, with 82% strongly or somewhat supporting.

“Jacksonville is not immune to the wave of national attention focused on racial inequality, and overwhelming majorities locally are supportive of the movement to alleviate these disparities,” Binder said.

One side-effect of the protest movement is the growing support for removing Confederate symbols from government property. Sixty-five percent of those surveyed said the support or strongly support the removal of Confederate statues from public spaces.

The coronavirus pandemic is the number one concern among respondents, surpassing crime. The survey showed 79% are worried about COVID-19 in general and 67% fear they could contract the virus themselves.

"COVID-19 worries remain extremely high in Jacksonville,” Binder said. “More people know somebody that has contracted the virus and the economy is not turning around as quickly as people might have hoped two months ago.”

However, despite concern still being high, overall concern about the virus has decreased by 14% when compared to the numbers gathered in April.

COVID-19 is the main reason part of the RNC is coming to Jacksonville. Most of those polled, 58%, said they oppose the decision. Seventy-one percent said they are concerned the event will spread the virus because of large crowds that make social distancing difficult.

“National nominating conventions are polarizing events, and unsurprisingly the levels of support for Jacksonville hosting the RNC varies dramatically by partisanship,” Binder said. “Under the backdrop of a global pandemic that appears to have come more fervently to Florida, the opposition to this event being hosted locally seems much more concerning.

“As always, the disclaimer with these numbers is that they present the findings of likely voters five months before an election, Binder said.”

He noted the campaign season has waned dramatically with both nominees uncontested. But the numbers remain notable.

“It is important to understand Jacksonville in 2020 has a +6 Democratic registration advantage over Republicans – yet in 2016 that margin was only +3,” Binder said. “We are a changing city and the current times seem to be accelerating that change.”

At the state and local level, only half the respondents said the approve of the job being done by Gov. Ron DeSantis and just 49% approve of Jacksonville Mayor Lenny Curry, while 49% disapprove.

An effort to improve Duval County schools is getting widespread support, the survey showed. Seventy-percent of respondents said they favor a ½ cent sales tax to fund upgrades, maintenance and consolidation.

READ MORE: To view the press release and a recap of the survey by UNF, click here. 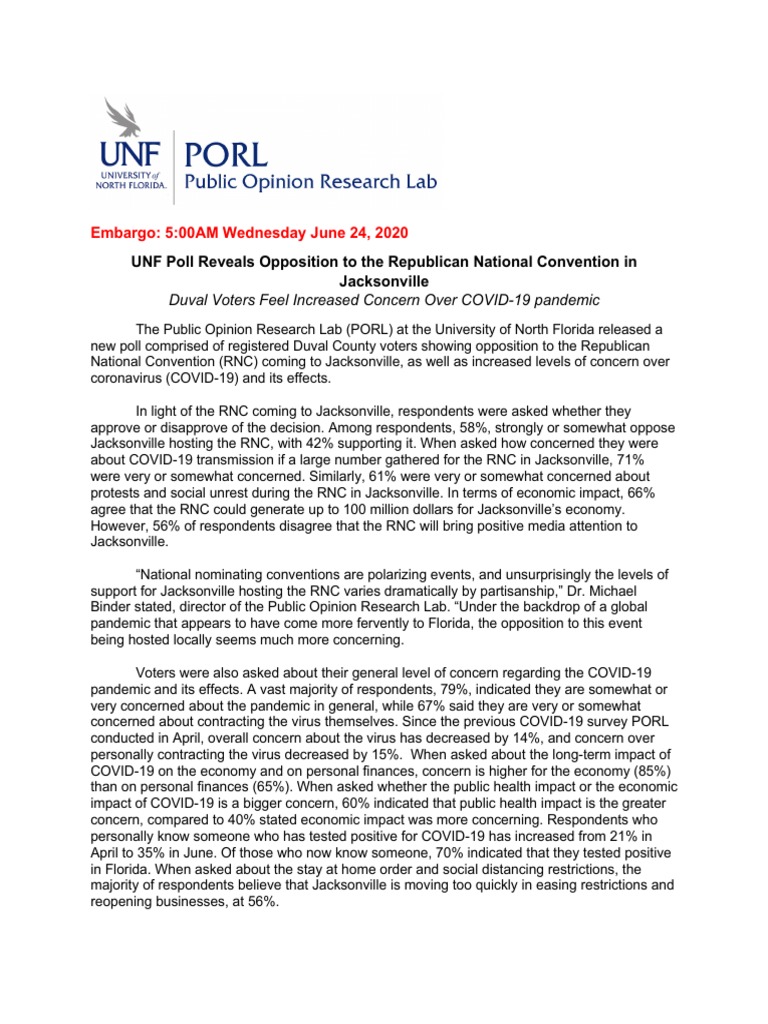