Earthquake felt in parts of metro Atlanta on Sunday

A 5.1 magnitude earthquake centered near the North Carolina and Virginia border was felt as far as Atlanta. 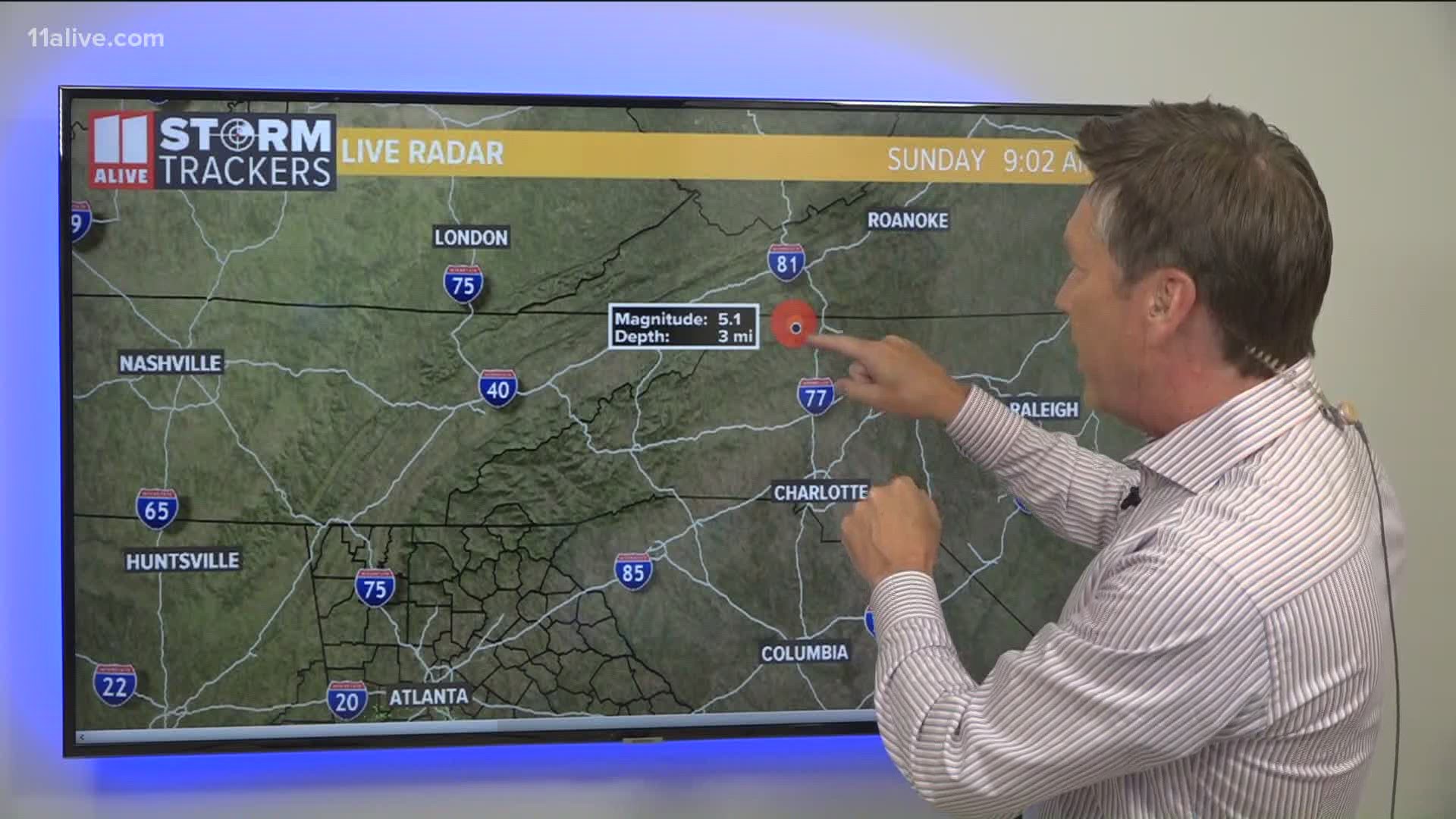 ATLANTA — The birds were chirping and the sun was shining just after 8 a.m. on Sunday morning. Then suddenly there was a rumble. Was that an earthquake?

Social media exploded with reports of an earthquake in the Atlanta area. This came at the same time, right around 8:07 a.m. when a 5.1 magnitude earthquake was reported near Sparta, NC, which is near the Virginia border.

We're getting reports of an earthquake across our area stretching from northeast Georgia to the NC Piedmont. We didn't feel it here at our office, but did anyone else feel it? #ncwx #scwx #gawx

According to the Georgia Tech seismogram, it was an earthquake. It shows a large spike in that 8 a.m. hour.

WCNC's meteorologist Brad Panovich said this would be the biggest quake in North Carolina since the 5.1 in 1916 near Asheville. Panovich said Saturday's M 2.6 in the same location was a foreshock.

"I would expect many small aftershocks over the next few days," Panovich said.

11Alive Chief Meteorologist Chris Holcomb says the 5.1 magnitude earthquake near the NC/VA line this morning shook some people as far south as the north Georgia mountains.

Did anybody feel it? A 5.1 magnitude #earthquake near the NC/VA line this morning shook some people as far south as the north Georgia mountains. We are getting a few reports from people in Georgia who felt it. #Storm11 pic.twitter.com/zMxCWIYoXy

According to the United States Geological Survey database, this is the second strongest quake in North Carolina since 1900. And we have reports it was felt in Midtown -- and as far south as Fayetteville.

I know I’ve been awake since 430am but I’m pretty sure my apartment just shook in midtown ATL. I might need to get some rest 🥴

Moments later, our own Aisha Howard confirmed, she isn't crazy.

"Ok I’m not crazy!! My place shook in Atlanta," she Tweeted.

Others on social media tell us they felt it in Marietta, Athens, Riverdale, Stone Mountain and across the metro.

One viewer told us her bed shook like she was on a ride at Six Flags!

Yes, I did in SW ATL. My bed shook like I was on a ride at Six Flags!

Viewer Linda Perry told us that she felt it in Winder and a jewelry box fell off her desk and hit the floor.

There have been no reports of injuries or major damage, however, there are minor reports of roads that buckled and buildings with minor cracks in them. One picture shows a grocery store items from the shelves all over the floor in Sparta, North Carolina.

Credit: AP
Various items litter the floor of the 4 Brothers Store in Sparta, N.C. after an earthquake shook much of North Carolina early Sunday, Aug. 9, 2020. (Michael Hull via AP)