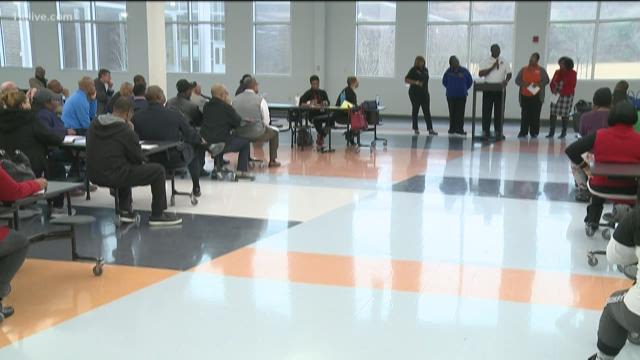 CLAYTON COUNTY, Ga. - Jet fuels and children’s education don’t seem to have much in common except in Clayton County.

A proposal at the state capitol would eliminate state sales taxes on jet fuel, and in Clayton County, those tax dollars make up a big part of the public education budget.

That’s why county leaders met with parents on Saturday to discuss possibly losing $20 million over the next two years.

In front of a packed cafeteria, Clayton schools superintendent Morcease Beasley said his district could lose a large portion of its budget.

"It would be about 17 percent of our SPLOST budget,” he said. “Now which corporation, Delta included can maintain its level of operations with a reduction of 17 percent in its revenue? That is not moral. We wouldn't allow Delta to experience it, so why would we allow our children to experience such?"

Beasley said several capital projects around the district would be changed or eliminated. "And this is a statewide issue,” he said. “Because there are other locations, other jurisdictions that are being affected by the loss of this revenue."

But Clayton could lose the most. According to Clayton public schools, 3,000 acres of Hartsfield-Jackson’s footprint are in Clayton.

Gov. Nathan Deal wrote this week the bill would help Georgia and by eliminating the tax, “encourage airlines to fly additional direct flights from Georgia to destinations around the globe.

“Georgia and our businesses are global competitions,” Deal wrote. “We need direct air travel to provide our companies with immediate access worldwide.”

Several state representatives from Clayton spoke at Saturday’s meeting, including Rep. Demetrious Douglas, who’s against eliminating the sales tax simply because of the consequences.

"Right is right and wrong is wrong,” he said. “If you're for kids and you expect kids to read by the third grade, why hinder the kids by taking a tax-base that is going directly to the kids and our schools?"

"We understand making sure we reduce taxes,” Beasley said. “We understand that. But let’s not do that on the backs of our children and disproportionally impact the children of Clayton County."