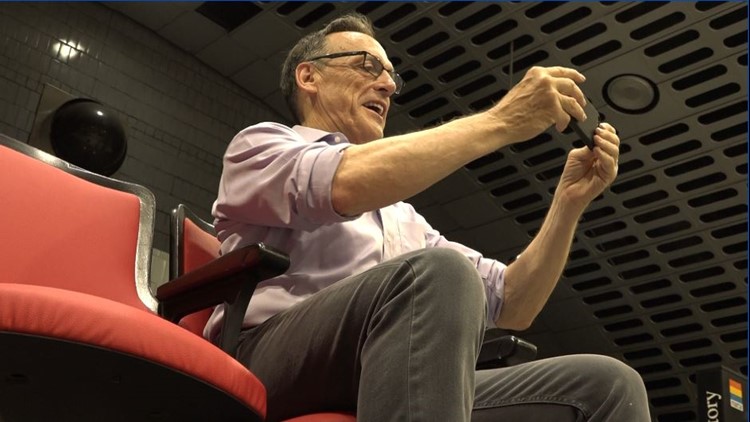 Entertainment for your commute: Virtual theatre arrives for MARTA

ATLANTA — ATLANTA -- Did you ever just wish for a little entertainment on your commute? MARTA riders – take note.

Passengers passing through Peachtree Center Station can now enjoy a musical break from the classic "110 in the Shade," with a techy twist.

"It's just like watching a show right here in the station," Kate, commuting to work, told 11Alive.

"The Platform Performance," a 360-degree virtual theatre experience is a partnership between Theatrical Outfit and the transit authority, offering a unique chance for riders to enjoy the musical playing only a few blocks away on Luckie Street.

"When I sat on my phone watching them perform '110 in the Shade" on my phone in the MARTA station, I felt like a kid," Tom Key, artistic director of Theatrical Outfit, said.

As director of the current rendition, Key is intimately familiar with the ensemble and their performance. Yet, the MARTA rendition feels new, according to Key.

"It was just such a new way to experience theater," Key said.

The virtual performance is not just about promotion. The theater group is partnering with transit officials to study how patrons use MARTA. With a $100,000 grant from the Audience Building Roundtable of the Arthur M. Blank Family Foundation, the group studied the question, "Who rides the subway and attends shows? What would they want to bridge these two activities? How do we provide what they aren't getting?"

Ultimately, the research revealed less than ten percent of patrons ride the subway to a show, based on a database of over 300,000 names who were sent a survey about arts attendance and MARTA ridership. "The Platform Performance" a chance to reverse the trend, enticing current and future arts supporters by bringing live performance to the daily commute.

Through July 1, riders can experience the show by logging into a special WiFi at "The Platform Performance" and accessing a hidden hyperlink. Theatrical Outfit's production of "110 in the Shade" runs through Sunday.