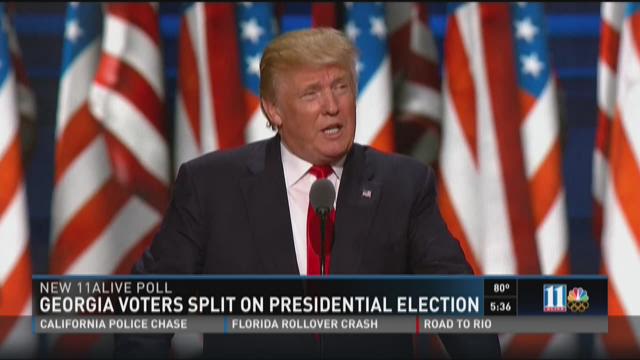 Among white voters, Trump has a 2 to 1 lead. The GOP candidate also holds nearly the same lead among senior voters.

Clinton leads by 66 points among African-American voters, who comprise about 29 percent of likely voters.

Trump and Clinton are tied at 44 percent each in suburban Georgia. Breaking it down, Trump leads by 12 points among suburban men; Clinton leads by 11 points among suburban women. Trump leads in military households by 16 points, in evangelical households by 27 points. Among Georgia Democrats, Trump gets 1% of the vote. Among Georgia Republicans, Clinton gets 6%. Moderates break for Clinton by 12 points. Independents break for Trump by 12 points.

Trump voters say undocumented immigrants should be deported by a 12:1 margin; Clinton voters say they should be allowed to stay by a 5:2 margin.

Survey notes: SurveyUSA interviewed 800 Georgia adults between July 29 and July 31. All interviews were conducted after the conclusion of the Democratic National Convention. Of the adults interviewed, 711 were registered to vote in Georgia. Of the registered voters, 628 were determined by SurveyUSA to be likely to vote in the 11/08/16 general election. This research was conducted using blended sample, mixed mode. Respondents reachable on a home telephone (65% of registered voters) were interviewed on their home telephone in the recorded voice of a professional announcer. Respondents not reachable on a home telephone (35% of registered voters) were shown a questionnaire on the screen of their smartphone, tablet or other electronic device.