He had only been inside the jail for nine days before he died of dehydration and apparent brain injury.

ROCKDALE COUNTY, Ga. — The death of a Rockdale County inmate has now resulted in a lawsuit.

The family of Shali Tilson is filing suit against the county's sheriff, a sergeant and two deputies, claiming the 22-year-old form Conyers died of dehydration while locked in solitary confinement at the Rockdale County Jail last year. He had only been inside the jail for nine days.

Deputies were called to respond that night on March 12, 2018. Officials found Tilson alone in his cell at the time of his death, with no apparent injuries or identifiable cause. An investigation by the Georgia Bureau of Investigation ruled that the inmate was indeed found dehydrated with a brain injury, however, they were unable to pinpoint how or what happened.

Tilson came to the jail after he was arrested by Conyers Police on March 3 for two misdemeanor charges – disorderly conduct and obstruction of a law enforcement officer.

After Tilson's death, the sheriff's office said they would conduct an investigation of the incident and turn any findings over to the GBI. Investigators would also turn over their findings to Rockdale County Sheriff's Office.

But, a year later, remaining questions have pushed Tilson's family to file the lawsuit, asking the federal government to look into his death, saying the jail should have realized that the 22-year-old "was in the midst of a psychiatric crisis" just before his death.

"Jails are not psychiatric hospitals, and people suffering from phychosis should not be held in solitary confinement," and opening line from the March 26, 2019 complaint stated. 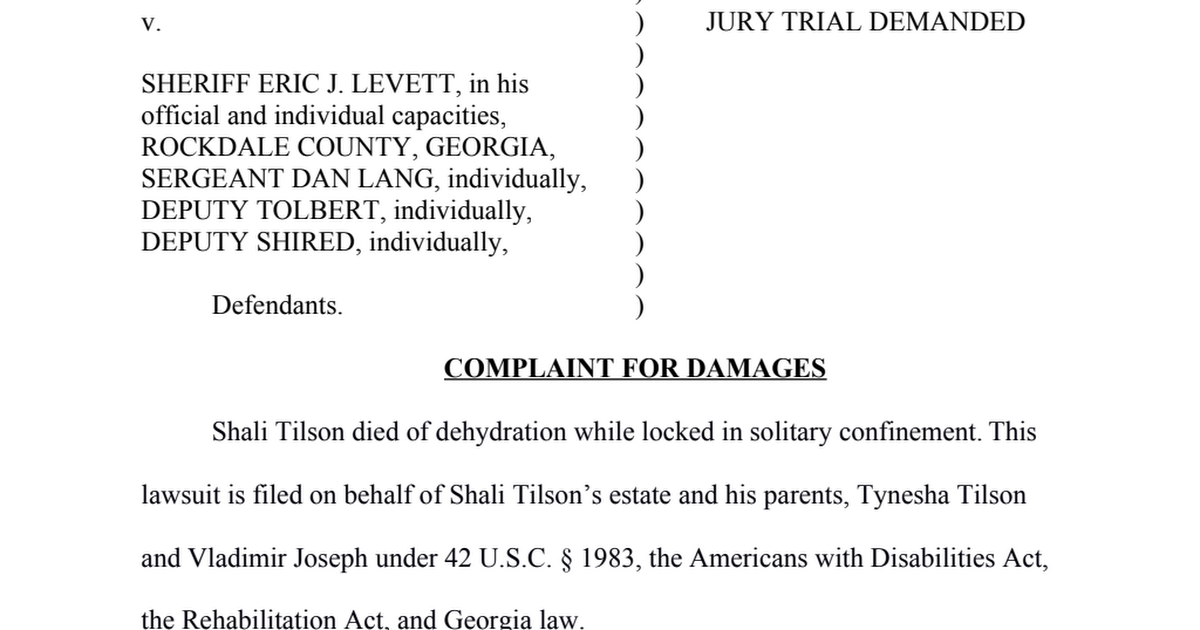 It goes on to allege that it was clear Tilson was "experiencing delusions, hallucinations, and paranoia."

"In spite of clear and obvious signs that Mr. Tilson was in the midst of a medical crisis, the jailers did not seek medical attention for him. Instead, they placed him, unmedicated, in solitary confinement. For eight days, Mr. Tilson remained locked in a single cell with no running water, and only a “suicide gown,” a metal bed, and a hole in the floor to urinate and defecate."

Mawuli Davis, who is representing Tilson's family, said they are filing suit because they believe they have enough evidence to move forward with a case.

"We believed it was just time," Davis state. "His death was absolutely preventable. There was no reason for Shali Tilson to die."

The complaint states attorneys are now looking for a jury trial. 11Alive reached out to the county for a response, but did not receive one.

But Tilson is not the only inmate to have died at the facility in 2018. Jamie Krischelle Henry was found unresponsive in her cell in May as deputies were doing their routine cell checks. Officials said the 40-year-old had only been at the jail for 48 hours. Her death came just 76 days after Tilson's.