The father says the toddler was airlifted to Children's Healthcare of Atlanta after two lab mix dogs bit her in the back of the neck and thigh area. 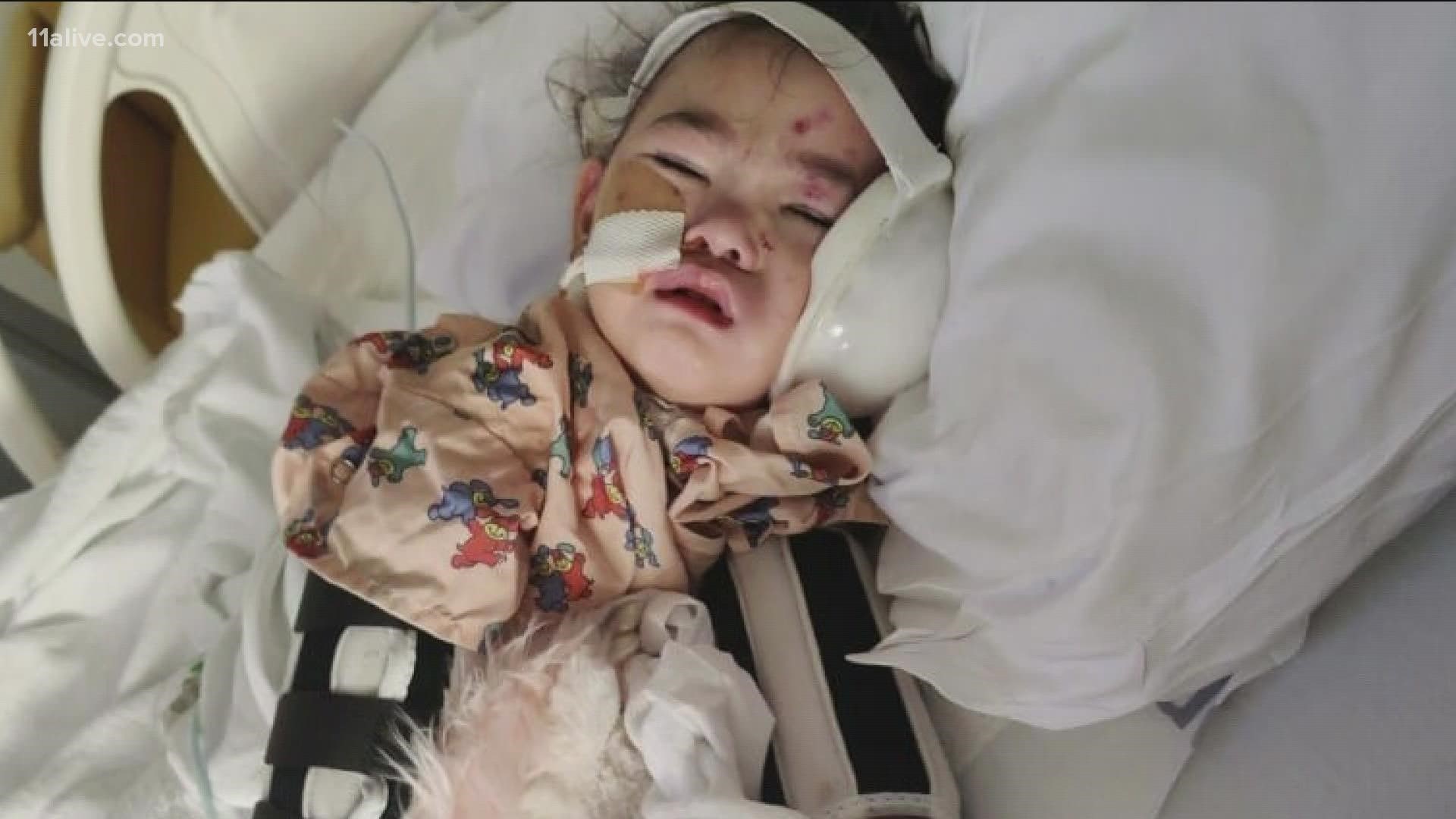 GRIFFIN, Ga. — A 2-year-old girl is recovering in Children's Healthcare of Atlanta after she was bit by two dogs. Her father is now asking for help as the hospital bills start to stack up.

The toddler, Jolie, has been in the hospital since August 31. Her father, Jeremy Reach, said she was airlifted there after two lab mix dogs bit her in the back of her neck and thigh area.

"She was going out, and it looked like the weather was getting a little cooler. So I grabbed a jacket, and by the time I turned around, I heard her yell," Reach remembers. "One of the dogs had caught her from behind. And just grabbed her and started shaking her a little bit."

His wife, Aiqi, and five-year-old son Jasper had just left the house. Reach said it all happened so quickly.

"It was just me and her, which I'm glad because with a five-year-old if he'd been out, it could have happened to a second child," he said. "[Jolie] was unresponsive. She moved her eyelid, blinking, and she was moving her mouth but really couldn't say anything."

Almost one month later, she is still recovering. Balloons decorate their hospital room, and a couch has turned into Reach's new bed, a "home" away from their real home in Tucker.

"They've attached a vacuum pump to her to pump out one of her wounds on her hip because it had some infection in deep. They're really worried about infection," Reach added.

Jolie before and after dog attack

Reach said the dogs belong to his neighbor, who has been "remorseful." Reach said they came onto their yard when the attack happened.

"He's a pretty decent guy. The dogs were just out of control," he added. "I was just scared. I totally thought the worst. And it just put me straight into shock. I was just kind of going through the motions."

The bites and scratches have amounted to multiple surgeries. Jolie spent her first week in the hospital at the intensive care unit, and her parents have stayed by her side since.

"I'm hoping she's young enough; she forgets all this. Then she can just put that behind her. It's something she never remembers," Reach added.

He said Jolie is fun, loving, playful, and loves to tease him. He hopes she'll be able to bounce back soon, which is why he set up a fundraising page to help pay for all current and future surgeries.

"I really hate to ask for help. I like to have a private life, and this is just putting everything out there in the spotlight. It's kind of rough, but I want my daughter to grow up healthy and happy," he added.

Jolie has at least two weeks left in the hospital and later will have to do physical therapy.

"We have two kids, and I would like them to continue to have normal lives. I'm just afraid that if all I have is bills if the insurance doesn't cover some parts of it, it's going to be hard to give them the life that any kid wants, just growing up and having the toys and, you know, going to the beach," he said.