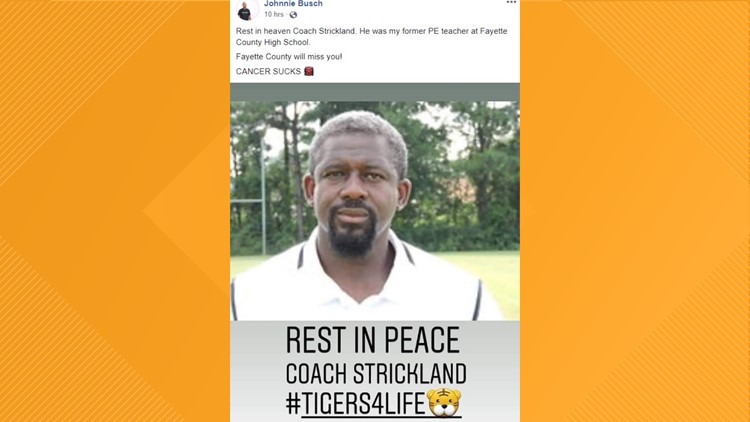 John Strickland was remembered for the impact he had on many lives in the Fayette County community.
Author: Christopher Buchanan
Published: 8:30 PM EST December 29, 2019
Updated: 10:49 AM EST December 30, 2019

FAYETTEVILLE, Ga. — A friend set up a fundraising account for the family of Coach John Strickland on Saturday. By Sunday, the day the well-known coach died, it had raised $13,000.

But for the Fayette County High School community, there's no dollar amount that can match the impact Strickland had on his community.

"Our program suffered a tremendous loss today," FCHS Tigers Track and Field shared on Facebook. "Our leader, Coach John Strickland, has crossed the finishline of his earthly journey. We are praying for his family, friends, & everyone he inspired through his dedication to the FCHS Tigers."

King Calhoun, a junior at the high school, wrote that it felt like just yesterday that he was training with Strickland on the track.

"Strickland helped us in so many big ways from just bettering us in the little aspects of the game," he said. "Definitely a true definition of a coach."

Chasity Manning, who set up the GoFundMe for the beloved coach, said that he was very private about his battle, but came to a point where he was worried about what followed.

"He is at peace knowing he is going to be with God but he is worried about everyone left behind and wants to be able to provide buses for those who want to attend his funeral," she wrote. "Just like Coach Strickland always worrying about everyone else!"

By the end of the weekend, his struggle had ended.

"Coach Strickland has gone to be with the Lord," she wrote. "He isn’t suffering any longer."

As of Sunday evening, nearly 300 donors and raised thousands of dollars for the man that at least one described as a great coach, mentor, and leader.

"One of the most genuine men I've ever met, always humble, always helping and always smiling," wrote Opal Harris.

"He always wanted to get the best out of you because he knew you could do more and be more," R Graham wrote, adding that Strickland coached him and his two brothers.

"You only have ONE high school basketball coach and I’m blessed to call you mine," Christa Jones added. "Thank you for all your care, consideration, and Strickland-ness. You’re astonishing."

The basketball team echoed those statements in their Twitter tribute to Strickland.

"Words can’t describe how much John Strickland has meant to our community. He is the most selfless and caring man you will ever come across, the true definition of a coach," the message said. "Coach Strickland dedicated his life to helping kids and his legacy will live on forever through us all!"

Cross country coach Chris McCord shared that message while also providing one of his own.

"The hardest part for me losing a colleague/fellow coach is hearing, seeing, the heartache in his current & former players & Ss many who are my current & former Ss as well," he said. "It’s hard to grieve, but it’s worse to watch young people (youth and young adults) grieve. #RIPStrickland."

As the community just begins to grieve in its own way, those who knew Coach Strickland are unified in their memories of a man who played such a pivitol role in their lives.

FCHS Tigers may have said it best in their short message accompanied with photos of Strickland standing proudly alongside many young athletes: "Our Coach."

'They are the reason he has a reason to fight': Sheriff's office supporting man with cancer