'I don't want them to die from this': Widow wants clean gear to reduce firefighters' cancer risk

Firefighters face a 9% higher risk of developing cancer on the job. Clean gear can reduce that risk. 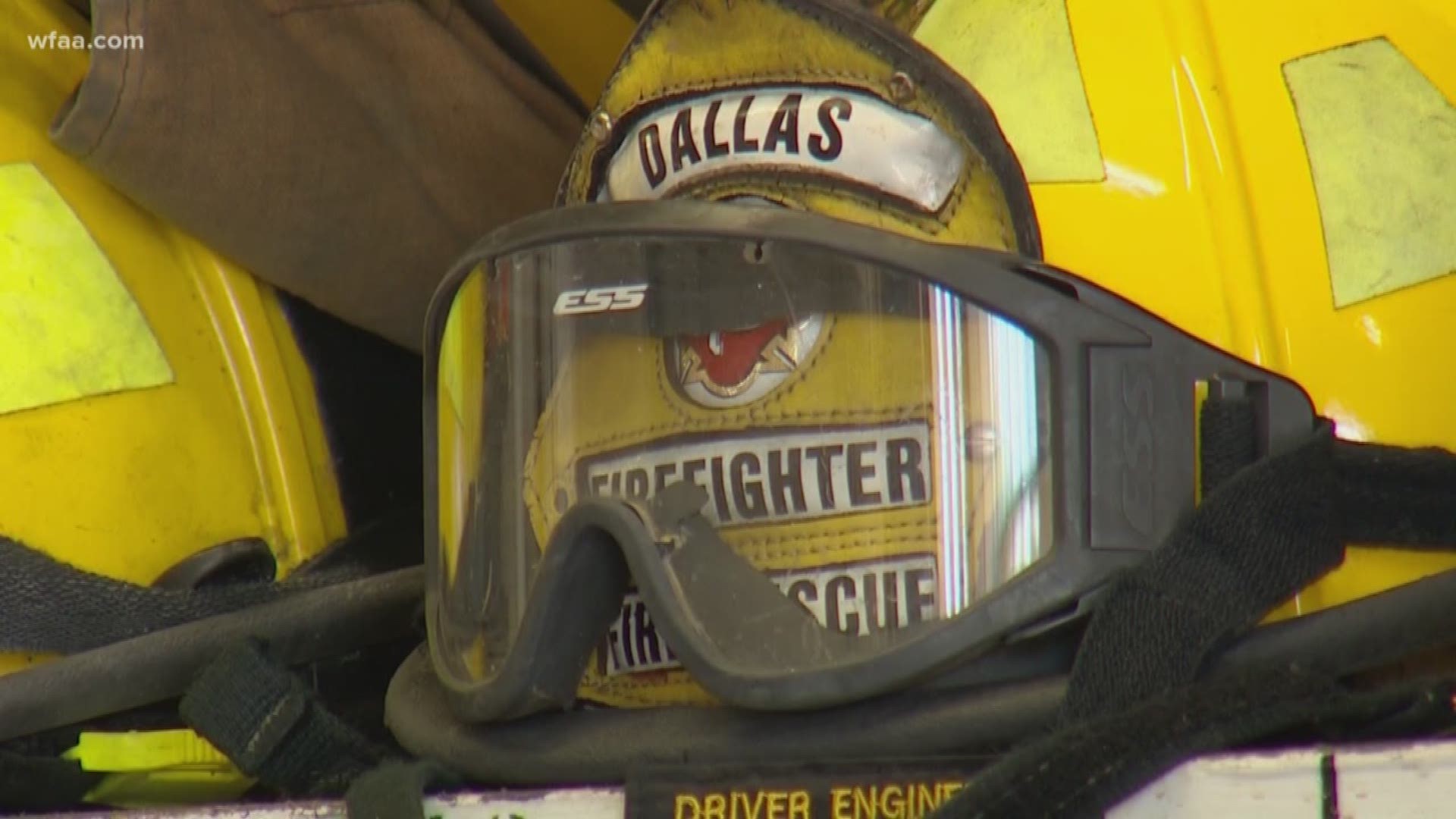 DALLAS — Firefighters know the risks of going into danger. They do it to save lives.

But the protective gear they wear could pose a danger itself.

The widow of a Dallas firefighter who died from brain cancer is raising awareness about the importance of clean gear.

Dena Delbert-Plummer's husband, Jeffery Delbert, was a Dallas firefighter for 10 years before he died of brain cancer at age 39 in 2006.

Dena said there is one incident some older Dallas firefighters will remember.

“An electrical transformer blew up and spewed onto all the firefighters that were there, which was Jeff and three others," she said. "All four of those men have died early deaths of cancer.”

The firefighters were exposed to were polychlorinated biphenyls, which medical studies link to brain cancer.

But toxic chemicals aren't the only threat. When firefighters battle fires, their gear is exposed to dangerous smoke and soot from burning materials that, themselves, can be toxic.

It's this everyday risk that motivates Dena Delbert-Plummer's effort to raise awareness that clean gear can reduce a firefighter's chances of getting cancer.

Credit: Courtesy photo
Jeffery Delbert was a firefighter for 13 years.

An 'epidemic' of cancer in firefighters

The Dallas Firefighters Association said 60 current and retired Dallas firefighters have been diagnosed with cancer.

The Fort Worth Fire Department reports at least 60 firefighters, mostly active-duty, have been diagnosed with cancer.

"Over the past few years, it has been increasingly clear that the fire service is facing an epidemic," Brian McQueen, former fire chief in Whitesboro, NY, wrote in an article for International Fire Fighter magazine.

Dr. Jerry Barker, a radiation oncologist with Texas Oncology, has treated firefighters with cancer. Over the last 16 years, he has specialized in head and neck cancer.

Barker said firefighters are frequently diagnosed with brain and bladder cancer. Firefighters can get any type of cancer from exposure to countless carcinogens.

Though the science is still emerging, there is a growing consensus that firefighters have a higher risk of getting cancer than the average person.

A widow's mission to save firefighters

Dena Delbert-Plummer's mission is born out of grief.

“It never goes away. It is always a part of my life,” she said.

She and Jeffery met at a church camp. They married a year later, when she was 19 and he was 23. The pair started at paramedic school together and both worked as reserves for the McKinney Fire Department.

Credit: Courtesy photo
Jeffery and Dena met at a church camp before they both became reserves for the McKinney Fire Department.

Jeffery worked at the Allen and McKinney fire departments before he moved to the Dallas department.

They had three children together.

Now Dena shares his story with Dallas Fire-Rescue recruits. She shows them pictures of her late husband hoping to send a message about occupational cancer.

“When I talk to the recruits, I definitely approach it from an emotional end. I show them how much Jeff loved being in the fire department," she says. "And I tell them the story of what happened with him, and how he died. And I start teaching them the way to protect themselves.”

Credit: Courtesy photo
Jeffery Delbert was a Dallas firefighter who died of cancer. His death was classified as a "line of duty" death because Delbert's brain cancer was caused by a carcinogen related to firefighter.

In 2018, Dallas Fire-Rescue started a new protocol for cleaning gear.

After a fire, crews will spray detergent on their gear, rinse it and decontaminate with wipes on the scene. Once firefighters return to the station, they have thirty minutes to shower and then detail wash their gear.

Dallas firefighters also have the option of using an extractor, a specialized washing machine for fire gear. Currently, DFR has 18 extractors. There are two at the training facility and 16 spread throughout the department.

Dallas firefighters can use the extractors at any time, but the national recommendation is to use an extractor twice a year.

Ideally, there would be an extractor in every fire station. But these machines cost tens of thousands of dollars to purchase and install.

Another option is also available for Dallas firefighters to clean their gear through a third party company.

Along with an extractor, many say firefighters should also have a second set of gear. That way, they can have another suit readily available to fight fires while one is being advanced cleaned.

An additional suit can cost hundreds of dollars per firefighter.

'I don't want them to die from this'

Raising awareness is key because it's free.

Families of firefighters, like Dena Delbert-Plummer, want people to be aware of the problem.

She will continue to use Jeffery Delbert’s story to advocate for more research, more safety measures, and more legislation for firefighters and their families.

“I don’t want them to die from this. I’ll do everything I can to help. They’ve certainly been there for me,” she said.