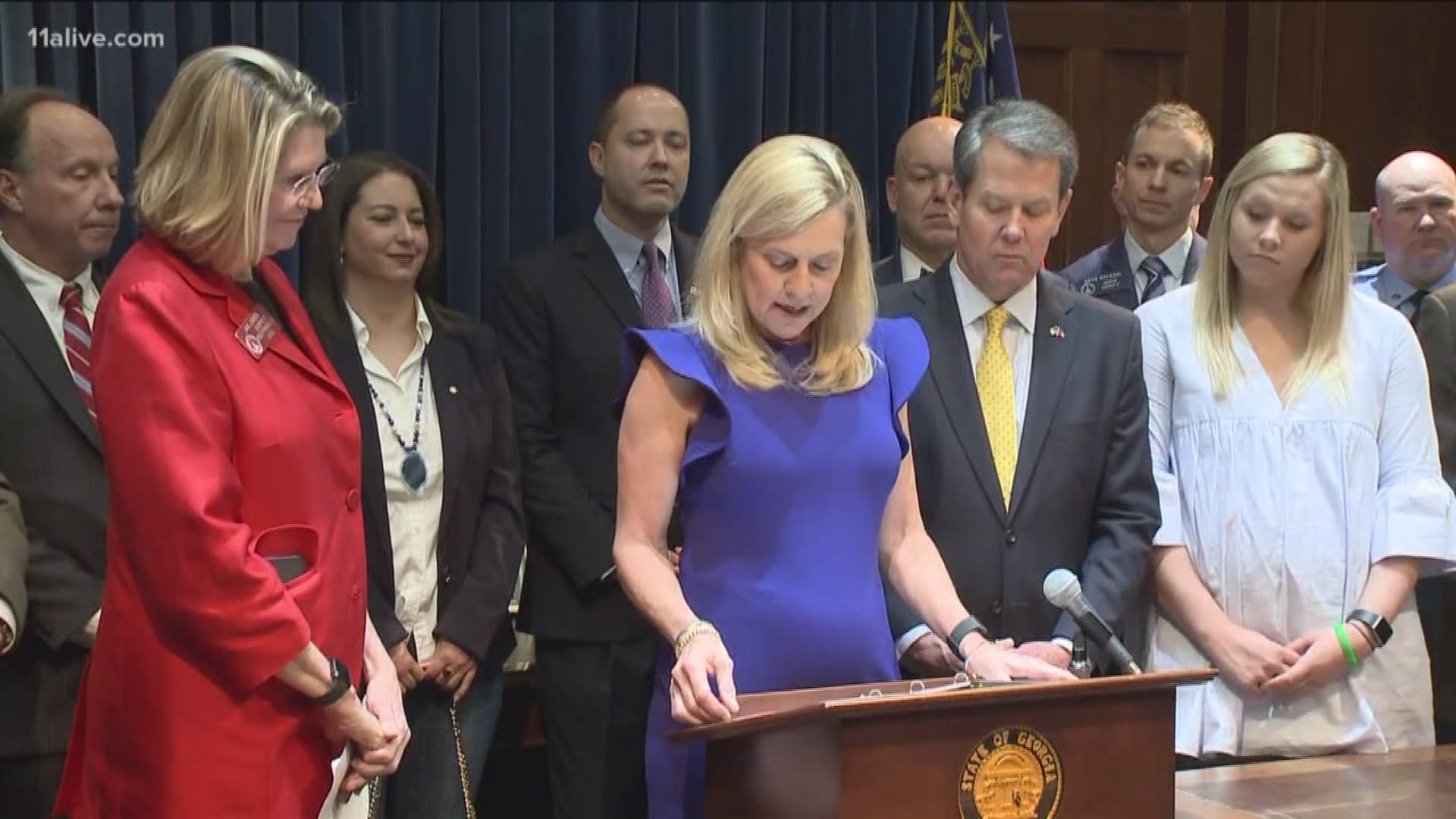 ATLANTA — Gov. Brian Kemp and First Lady Marty Kemp are pledging to fight against human trafficking in the state of Georgia.

Mrs. Kemp announced Tuesday that the governor signed an executive order to form the Georgians for Refuge Action Compassion and Education Commission - the GRACE Commission. The group - which will be co-chaired by the first lady, the Georgia Bureau of Investigations Director Vic Reynolds, and Speaker pro tempore Jan Jones - will work to find ways to combat the problems in the state.

The first lady said while she and the governor were campaigning across Georgia, there were many issues that residents felt alarmed about - one being sex trafficking.

RELATED: The Super Bowl is over. Sex trafficking is not.

"They wanted to know that Brian and I would not forget this issue," she added.

Mrs. Kemp said she wants parents to know the subject has not left her mind, which is why the GRACE Commission was formed.

"As the mother of three girls, I cannot forget their concerns," she said.

MORE: She came to Atlanta to be in a music video. He told her she'd dance naked and sell her body.

ALSO: Sex trafficking ring suspects may have made millions and tried to hide it at casinos

The governor was there with the first lady as she made the announcement. He also said legislation had already been introduced to help crack down on the issue. The governor hopes Senate Bill 158, the Anti-human Trafficking Protective Response Act, is passed swiftly in the Georgia Assembly.

"Marty and I stand here today to reaffirm our commitment to ending this criminal enterprise in our state," the governor said.

"We make this pledge not only as Georgia's first family, but also as parents," he added.

Although the state is booming for several industries, he knows human trafficking is a problem.

"It's a hub for organized crime, street gangs, and exploitation of thousands of people on an annual basis."

Before the Super Bowl, dozens were arrested in sex trafficking stings led by the Department of Homeland Security. The FBI also said more than 160 were arrested during an 11-day operation. Several people were recovered because of law enforcement's efforts.

Atlanta Police said they arrested a man who was accused of human trafficking the day before the Super Bowl.  A 19-year-old woman met Emmett "Jackpot" Murphy in New Jersey. She came to Atlanta to be in a music video, but when she arrived, police said Murphy told her she was going to dance naked at a local club and sell her body for money, then give all the cash to him.

"We live in a state with one of the highest rates in the nation for human trafficking with countless victims, many children," he said.

Mrs. Kemp said the GRACE Commission will be comprised of public officials, law enforcement, organizations, faith-based institutions, and experts on the subject matter. The members of the commission will be announced soon.