Fulton Co. D.A. claims two high-profile cases, in which Atlanta Police officers are charged, present a conflict based on her predecessor's actions. 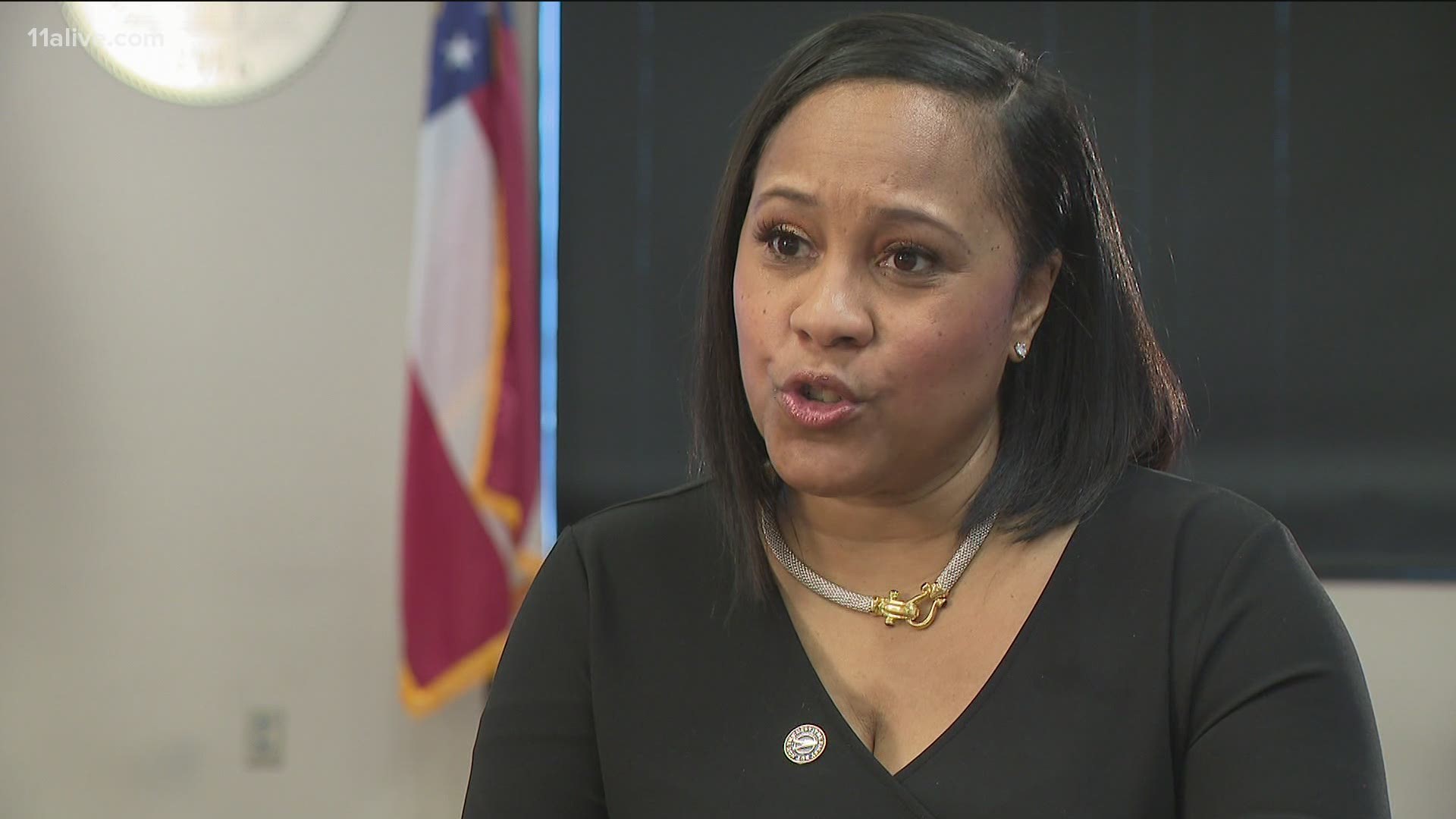 ATLANTA — Fulton County District Attorney Fani Willis believes asking state Attorney General Chris Carr to assign a new prosecutor for two of her office's cases because of potential conflicts of interest should have been a non-issue.

One of the cases regarded Taniyah Pilgrim and Messiah Young, two college students who were grabbed out of a car and tased by Atlanta Police during protests last summer. The other case concerns the police shooting where Rayshard Brooks was killed.

Willis requested Carr to transfer the cases, claiming conflicts of interest should disqualify her office from handling them.

"This is something that is done all of the time. It isn't that you get out of work because as you give work to another prosecutor, they give you a case from another jurisdiction where that prosecutor had a conflict," Willis told 11Alive during an interview Thursday.

RELATED: Attorneys for Rayshard Brooks, college students who were tased meet with Fulton D.A., join call for a new prosecutor

And a total of six APD officers are facing charges with crimes against Pilgrim and Young.

Willis asked Carr twice to assign a prosecutor to the cases from outside her office, and both times the attorney general denied the request.

Willis mentioned she has read misinformation over the past week of people believing if a new prosecutor is assigned to the cases, they would be moved outside of Fulton County. She claims that is false and if the cases head to trial, the cases would still be tried before a Fulton County jury.

"What is your reaction to him coming back twice and saying, 'I hear you, but I don't agree with it, and I want the cases to stay with you'?" 11Alive's Joe Henke asked Willis.

"It contradicts the long-standing tradition of when a prosecutor, lead prosecutor decides there is a conflict, typically it is just an administrative duty of the attorney general's office to appoint that to another office," Willis said. "It isn't lost on anyone that legal scholars have opined and looked at this issue and they agree with me."

Willis believes any wrongdoing puts a cloud over the entire Fulton County District Attorney's Office, whether Howard is still there or not, and presents a conflict of interest.

A spokesman for Carr sent 11Alive a statement Wednesday reading, "Our office maintains that the reasons provided by the Fulton County District Attorney in the first and second requests fail to meet what is required to invoke the conflict statute. In her letters, the Fulton County District Attorney makes a good case for why her predecessor has a conflict but not her own. The primary role of the Attorney General is to follow the law as written."

Rolfe's attorney previously filed a motion to recuse the Fulton County District Attorney from the case, which could also allow a new prosecutor to be assigned to the Brooks case.

While a judge hasn't ruled on the motion yet, Willis said if the defense's motion is denied she could file her own similar motion.

If a new prosecutor isn't assigned to the cases though, Willis said she knows it is her duty to prosecute the cases, but she doesn't believe it is the best option.

"I would do my oath and do it, but there is foreshadowing here. We are likely to run into problems and I think it is a very unwise way to move."

Last week, the family of Brooks along with Pilgrim and Young said they were unaware of the back-and-forth between Willis and Carr and first learned of the situation in news reports.

On Tuesday, Willis sat down with the victims, their attorneys, and family members. They said during that meeting, they accepted an apology from Willis for the lack of communication.

Willis tells 11Alive in the future she would handle a similar situation differently.

"At the time, what I was thinking is if I'm not going to be involved in the case, I want to make sure I don't do anything to interfere with a new prosecutor that comes and takes it," Willis said. "But in hindsight, there would have been no harm to one of my advocates just calling and saying this is what is going on right now."