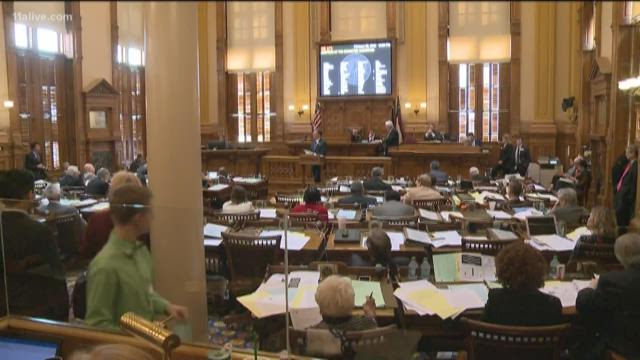 ATLANTA — The Georgia Senate passed a bill Friday that critics say would give state sanction to adoption agencies that discriminate against same-sex couples.

"Why in the world do we need this statute?" asked Sen. Jen Jordan (D-Cobb County), who just won a special election to the state senate. She directed the question to the bill's sponsor during debate Friday.

Republican Sen. William Ligon (R-Brunswick) argued that state law needs to protect church-based entities that may choose not to adopt children to same sex couples. As they argued, a half dozen members of the House of Representatives stood in the senate chamber and watched – many of them gay or lesbian.

"What I’m more concerned about is the imprimateur of the state basically saying that folks can discriminate against some of our Georgians," Jordan told Ligon.

The discrimination argument echoes through the Capitol regularly on religious freedom bills. Lately, it’s been made to keep from scaring off businesses like Amazon.

But the Republican majority in the Senate mostly doesn’t buy it.

"I thought it was about children and giving children opportunities," said Sen. Fran Millar (R-DeKalb County). "I don’t want to talk about Amazon and the effect on business. I’m tired of us failing in certain areas and we have failed these foster children."

The Senate passed the bill with every Democrat voting no. Nan Orrock was one of them.

"I don’t know why an entire political party wants to proudly carry the brand of being hateful," Orrock said after the vote.

If the faith-based adoption bill passes the House, it’s no sure bet Republican governor Nathan deal would sign it. He has vetoed bills before that he viewed as discriminatory.