Gas prices on the rise in Georgia due to pipeline cyberattack

A Russian criminal group is suspected to be responsible for the ransomware attack that shut down the Colonial Pipeline. 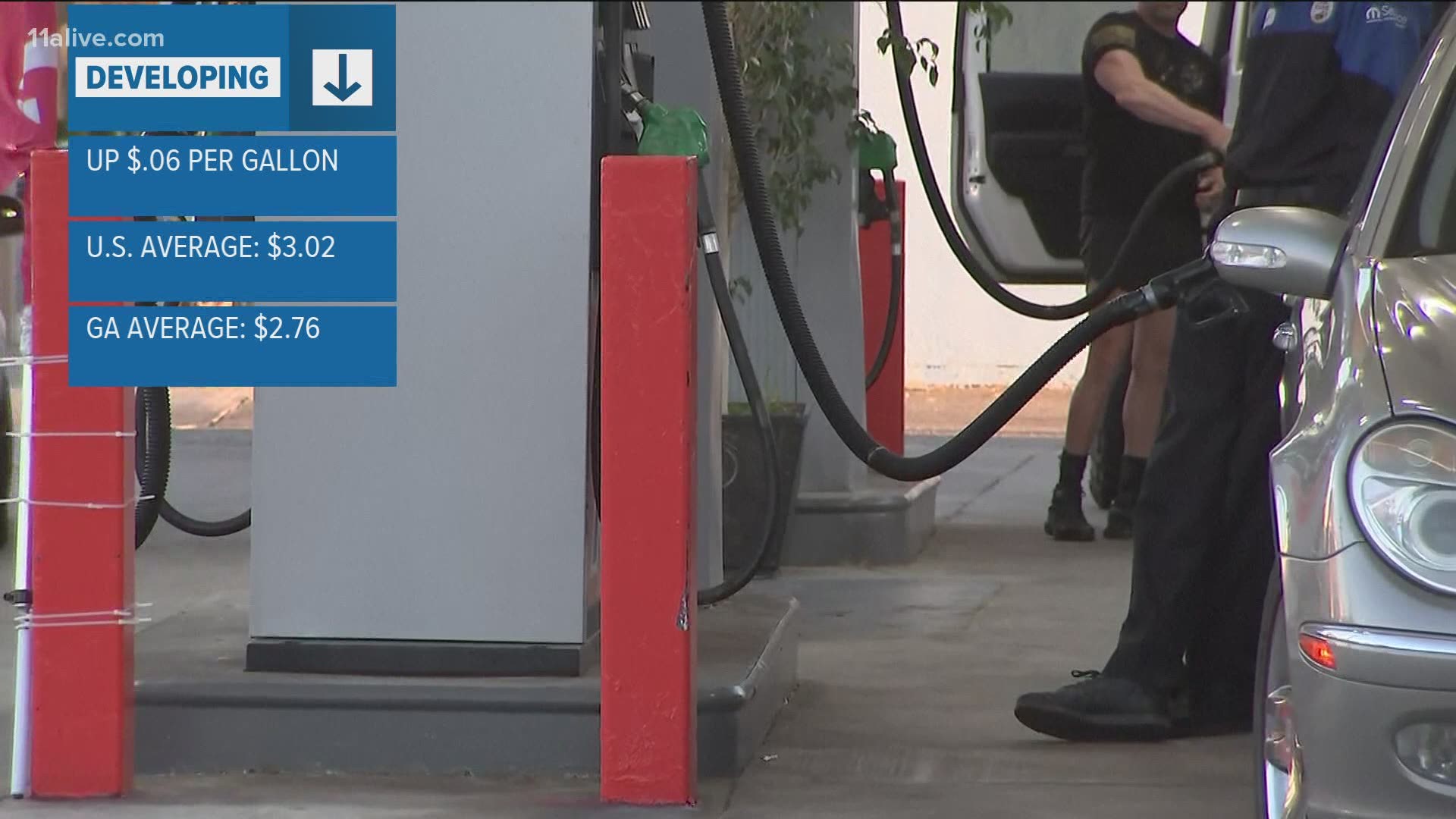 ATLANTA — Pipeline problems continue Monday morning for a Georgia-based operator and experts said it may impact the cost of gasoline.

Colonial Pipeline, an Alpharetta-based company was forced to shut down after a cyberattack. The company operates more than 5,000 miles of pipeline from Texas to New York. It's one of the largest in the country and delivers approximately 45% of all fuel to the East Coast.

The Atlanta-Fulton County emergency management agency said the cyberattack could potentially lead to gas shortages in the area, but said there's no need to panic just yet.

AAA predicts that gas prices will climb this week in reaction to the Colonial Pipeline shutdown.

Atlanta gas prices average $2.74 per gallon. This is an increase of 8.1 cents per gallon in the past week, according to GasBuddy's daily survey of 2,134 stations in Atlanta. This $1.12 higher than this same time last year.

According to GasBuddy price reports, the cheapest station in Atlanta is priced at $2.47 per gallon, and the most expensive sits at $3.49 per gallon.

"While average gas prices jumped last week as the nation continues to see COVID-19 recovery, all eyes are now on the Colonial Pipeline and the fact a cyberattack has completely shut all lines, leading to what could become a major challenge for fuel delivery," said Patrick De Haan, head of petroleum analysis for GasBuddy. "If the pipeline returns to service in the next day or two, the challenges will be minimal, but if full restart doesn't happen by then, we're likely to see a slight rise in gas prices, but more importantly, challenges for motorists needing fuel in Georgia, Tennessee, the Carolinas, Virginia, Northern Florida and surrounding areas."

A Russian criminal group is suspected to be responsible for the ransomware attack that shut down the Colonial Pipeline.

The company released a statement on Sunday and said an investigation has been launched.

"Leading, third-party cybersecurity experts were also immediately engaged after discovering the issue and launched an investigation into the nature and scope of this incident. We have remained in contact with law enforcement and other federal agencies, including the Department of Energy who is leading the Federal Government response," the company said.

The company said they are in the process of developing a restart plan. Colonial Pipeline said some of its smaller lateral lines are operational and four of its mainlines remain offline.

"We are in the process of restoring service to other laterals and will bring our full system back online only when we believe it is safe to do so, and in full compliance with the approval of all federal regulations," the press release stated.

"At this time, our primary focus continues to be the safe and efficient restoration of service to our pipeline system, while minimizing disruption to our customers and all those who rely on Colonial Pipeline," the company stated.