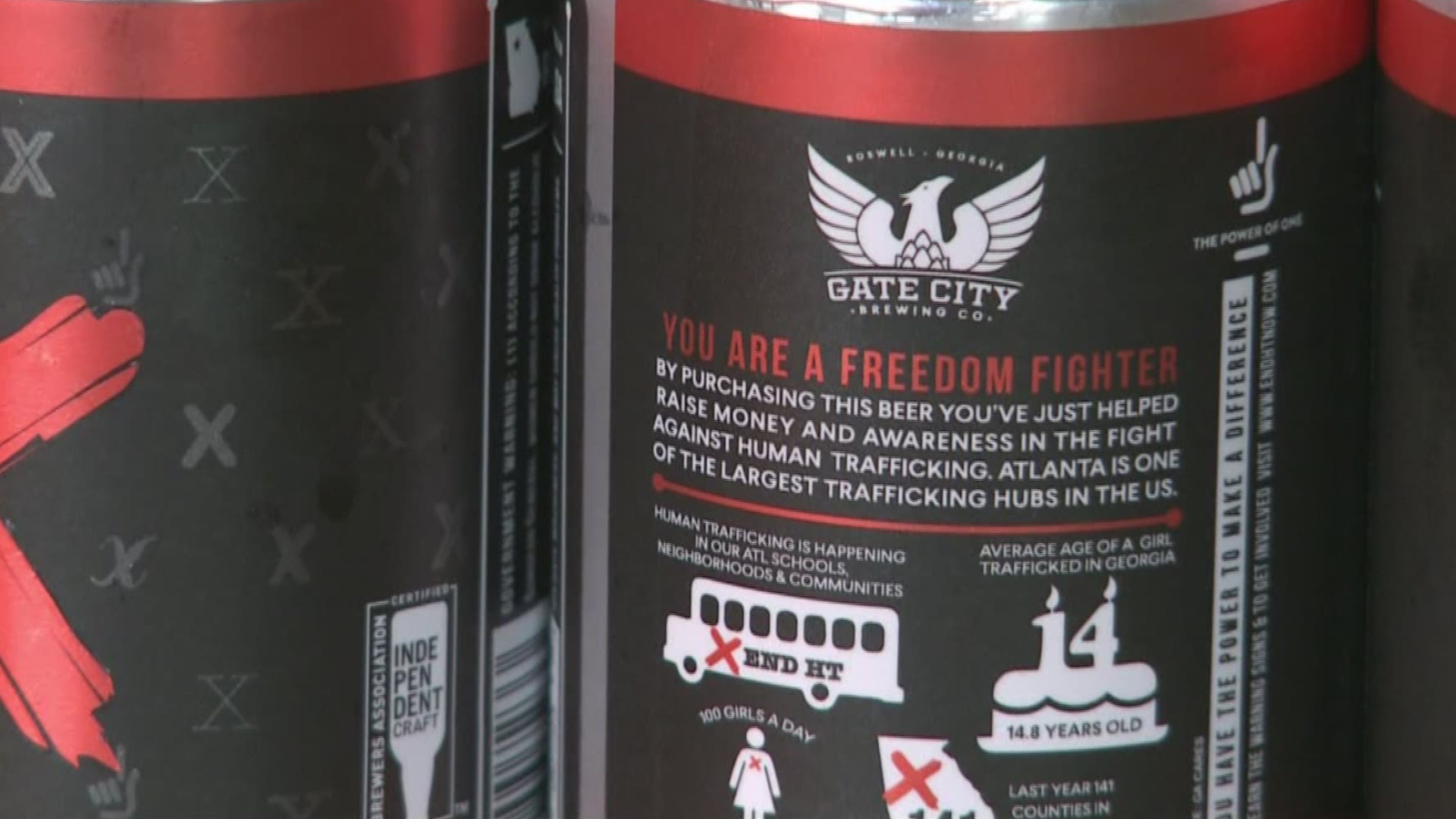 ROSWELL, Ga. — For a small craft brewery, having a major airline sell your beer on its flights is a great business opportunity.

For Gate City Brewing Company in Roswell, they also see it as an opportunity to share an important message about human trafficking.

Gate City began brewing and selling Freedom Fighter IPA last year, with the can featuring facts about human trafficking in Georgia, as well as national hotline numbers people can call or text to ask for help and report possible cases of human trafficking.

The founders of Gate City, Brian Borngesser and Pat Rains, said the idea for the beer came out of conversations with the Roswell Rotary Club.

The Rotary had well-established human trafficking awareness programs and then Rains suggested his brewery make a beer to help.

"It is a difficult topic to talk about, so bringing awareness and just putting it out there in a way that people can talk about was a big key," Rains said.

When Freedom Fighter IPA joined the breweries line-up, they began selling 6-packs, pints in their taproom and shirts with the beer's logo.

At a release and human trafficking awareness event in September 2019 inside Gate City's taproom, they raised more than $13,000 in proceeds off of sales, which were donated to two Atlanta organizations - Wellspring Living and Out of Darkness.

Borngesser said they knew Atlanta was a hub for human trafficking, with hotels and airports being two common places for the crime to happen and also be seen.

Several area hotels began selling the beer shortly after its release - and then Delta Airlines called.

"We've had some pinch-me moments since Gate City has been founded, and this was definitely one of them," Borngesser said. "This is something that we didn't anticipate becoming what it has become. We did it to raise awareness for a very important issue."

Delta wanted to sell Freedom Fighter IPA on select domestic flights during the month of January for National Slavery and Human Trafficking Prevention Month, with sales supporting Wellspring Living and Out of Darkness.

For Delta, the partnership is one of several ways the airline is working to fight human trafficking and raise awareness. For Gate City, the order from Delta became its top priority.

"We stopped everything that we were doing to make sure that we could take care of Delta," Borngesser said. "So there was some conversations about what the volume would be, what their ask was going to be, what they were going to require from us, and we immediately stopped and looked at the production plan."

RELATED: While human trafficking is a major problem, creating a panic with false reports is counterproductive

Now after entering a partnership with Delta, they're sending their beer some 30,000 feet up on Delta flights and taking their mission of giving back to new heights.

"To really have this platform through Gate City Brewing company to go and do something like this Delta partnership, like this beer and get it out and the potential to save a life, it really makes you stop and think," Rains said. "It is a business but can really be more than that."

Police: He thought he was meeting a teen before he was arrested