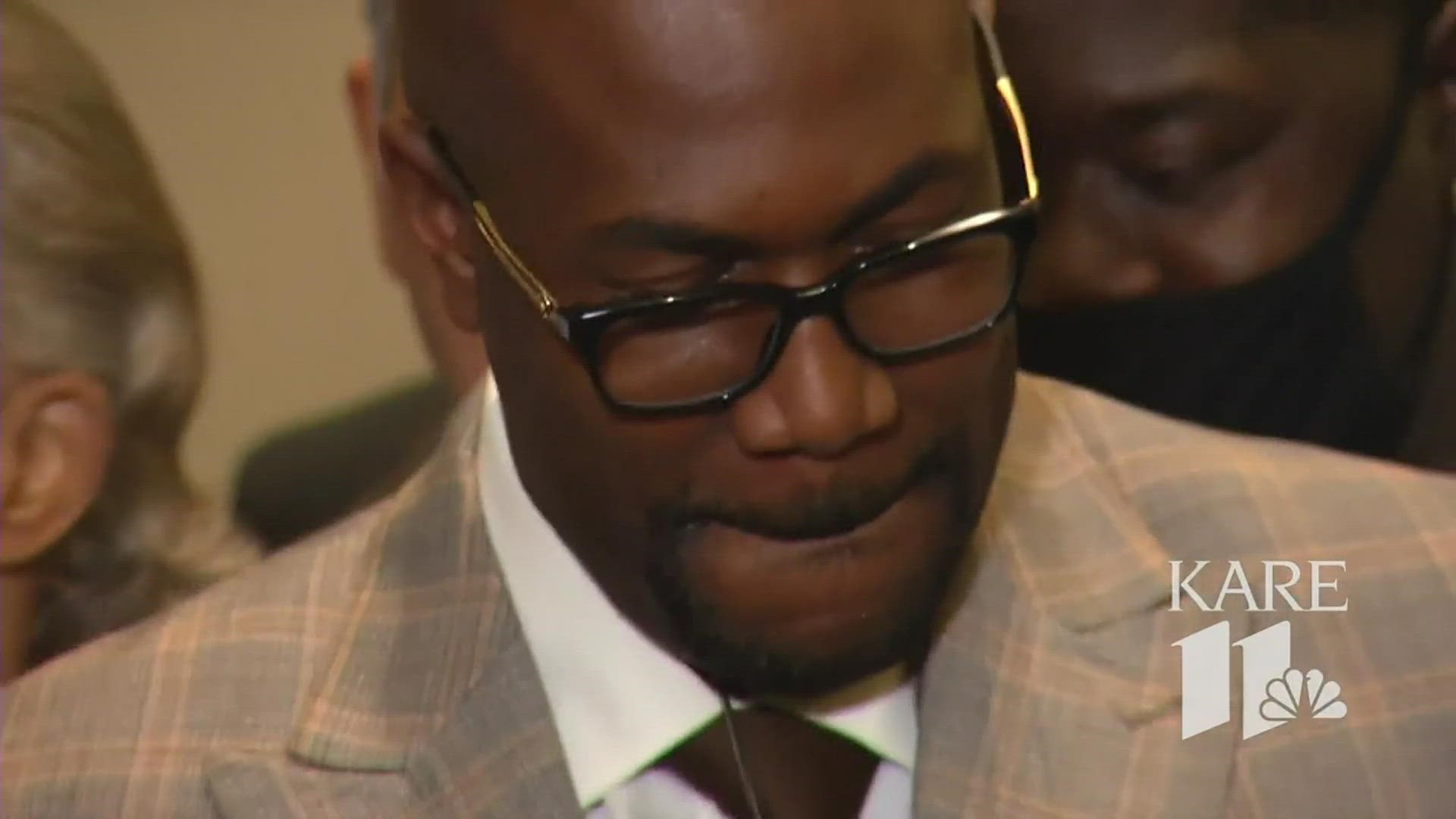 MINNEAPOLIS — After deliberating for more than 10 hours, a jury on Tuesday found former Minneapolis officer Derek Chauvin guilty of murder and manslaughter in the death of George Floyd last May. Chauvin, who was captured on video kneeling on Floyd's neck for nearly 10 minutes, was convicted of second and third-degree murder, as well as second-degree manslaughter.

Crowds flooded Minneapolis streets in celebration Tuesday afternoon, with many carrying signs and chanting "Say his name... George Floyd." People had started gathering at the Hennepin County Government Center and at the intersection of 38th Street and Chicago Avenue, known as George Floyd Square, prior to the verdict's announcement. Floyd's girlfriend, Courteney Ross, was among those captured smiling in the crowd as celebrations broke out, MPR News reported.

"Painfully earned justice has finally arrived," civil rights attorney Ben Crump, who represents Floyd's family, said in a statement on Twitter. He called the verdict "a turning point in history" that "sends a clear message on the need for accountability of law enforcement."

Crump held a press conference with Floyd's family and Rev. Al Sharpton after the announcement, calling for Americans to "lean into this moment."

"Let's make sure that this moment will be documented for our children yet and born, as they continue on the journey to justice knowing that the blood of George Floyd will give them a trail to find a way to a better America, a more just America," Crump said.

Philonise Floyd, George's brother, said during the press conference that he feels relieved.

"I finally have the opportunity to hopefully get some sleep," he said. "A lot of days that I prayed, and I hoped, and I was speaking everything into existence. I said, 'I have faith that he will be convicted.'"

He said that he's "not just fighting for George anymore."

"I'm fighting for everybody around this world," he said, adding, "Today, we're able to breathe again."

"We're going to try to get the George Floyd Act passed," and "keep pressure on the Senate," he said.

Minneapolis Police Chief Medaria Arradondo said he respected the decision. In a statement issued by the department, Arradondo thanked MPD officers and their families for their service during a "difficult and challenging" year.

"We recognize that our community is hurting, and hearts are heavy with many emotions, the chief said. "However, I have hope. The community that I was born and raised in and that we serve is resilient and together, we can find our moment to begin to heal. To the Floyd family, may peace and comfort guide you along the way."

Arradondo also asked for "calm, safety and peace in our community, today and in the days to come."

President Joe Biden and Vice President Kamala Harris called the Floyd family after the guilty verdict. Hours later, they delivered an address to the nation.

Biden said Floyd's killing "ripped the blinders off, for the whole world to see the systemic racism... that's a stain on our nation's soul. The knee on the neck of justice for Black Americans."

The president said nothing can bring Floyd back, but that the verdict can serve as "a giant step forward in the march toward justice in America."

Former President and First Lady Barack and Michelle Obama issued a statement saying that the jury "did the right thing."

"While today's verdict may have been a necessary step on the road to progress, it was far from a sufficient one," the Obamas' statement continues. "We cannot rest. We will need to follow through with the concrete reforms that will reduce and ultimately eliminate racial bias in our criminal justice system. We will need to redouble our efforts to expand economic opportunity for those communities that have been too long marginalized."

Minnesota Attorney General Keith Ellison spoke roughly 20 minutes after the reading of the jury's verdict, which he said reminds us how difficult it is to "make enduring change."

He said the decision doesn't amount to justice, but he hopes it helps provide some healing to Floyd's family.

"Justice implies true restoration. But it is accountability, which is the first step toward justice. And now the cause of justice is in your hands, and when I say your hands I mean the people of the United States," Ellison said.

Justice and Accountability! Things I never thought I would see. There’s much more work to do, but this is an amazing start working toward the reform this country NEEDS!

Minnesota Governor Tim Walz said in a public address that the verdict marks "an important step forward for justice in Minnesota."

But he emphasized that "our work just begins," calling it the "floor, not the ceiling, of where we need to get to."

Brooklyn Center Mayor Mike Elliott said the guilty verdicts delivered against Chauvin "won't bring George Floyd back, but it signals progress. To George Floyd’s, Daunte Wright’s and other families, we continue to hold you in our hearts. Let us all continue to work for a more just and equitable system."

As the sun sets on a historic day, Brooklyn Center @mayor_elliott says the #DerekChauvin guilty verdict can't bring #GeorgeFloyd back, but it has intensified a conversation that "needed to happen for many years."

He also is imposing another curfew from 11p to 6a. @kare11 pic.twitter.com/oBrjDMrSo6

"This is a good day in Minneapolis. It is a good day in Minnesota. But let me be exceedingly clear this is day one," Frey said. "We've gone through 400 years of injustice, intentional discrimination, Jim Crow-restrictive covenants that run with the land and all forms of anti-Blackness and structural racism that has impeded our Black community. Now is the time for that change."

The mayor said there's still a long way to go to achieve true justice in Minneapolis, and in the United States.

"We've been defined as a city on the edge," Frey said. "But it is that precipice of change that we aim to define ourselves by going into the future."

Chauvin is now the first white police officer to be convicted of murdering a civilian in Minnesota. The maximum sentence he could face is 40 years for second-degree murder, 25 years for third-degree murder and 10 years for second-degree manslaughter. Those sentences would likely be served concurrently, not consecutively, since they are all for the same crime. The presumptive sentences, however, are 12 and a half years for each murder charge and four years for the manslaughter charge. The judge could consider a heavier sentence based on an upward departure motion from the prosecution and other information discovered during the presentence investigation.

RELATED: How long will Derek Chauvin go to prison for George Floyd's murder?

Law enforcement in the Twin Cities metro area prepared for potential civil unrest following widespread rioting and damaged businesses last year. Barricades and fencing were put up around the Hennepin County Government Center and the police precincts. Mayor Jacob Frey has said at the peak, there could be about 2,000 National Guard soldiers and 1,100 law enforcement partners out on the streets.