Jury selection in Chauvin trial to resume Tuesday; one seat left to fill

The court has seated 14 people for the trial of the former Minneapolis officer. On Tuesday, they'll continue the search for one more alternate. 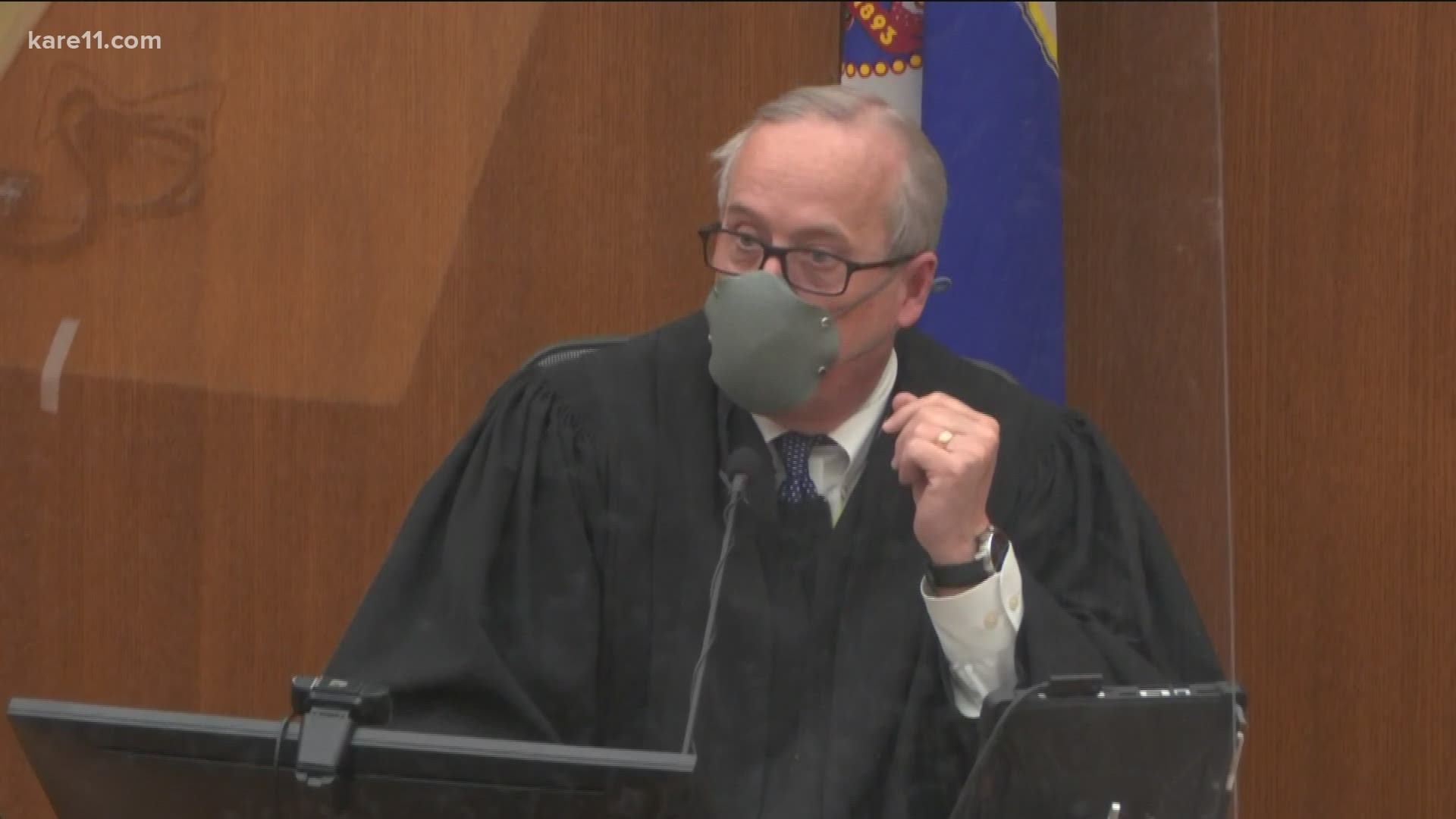 Another juror was selected Monday, bringing the total to 14.

Selection will resume Tuesday morning with just one more juror needed to decided the fate of Derek Chauvin, the former Minneapolis police officer accused in the May 2020 death of George Floyd.

A younger woman, identified in court only as Juror #118, was seated late Monday morning after questioning by both Chauvin's defense team and the prosecution. She is the 14th juror chosen, which was the original goal for the size of the panel. On Friday, however, Judge Peter Cahill decided the court should seat 15 instead.

KARE 11 News has confirmed through sources that the reason for seeking an additional juror, instead of the 14 originally needed, is in case the courts lose a juror for some unforeseen reason prior to opening statements beginning March 29.

KARE 11's Lou Raguse reports that the 15th juror is expected to be excused before opening statements, if the 14 other jurors still remain.

Of the 14 jurors selected thus far, two are white men, three are Black men, one is a Black woman, two identify as multi-racial women and six are white women.

RELATED: What we know so far about the jurors in the Derek Chauvin trial

A juror was seated Monday morning, but court proceedings ended for the day with one seat still unfilled.

Some potential jurors were dismissed for cause, but defense attorney Eric Nelson had to use one of his peremptory strikes to dismiss another, #121, who said he had strong opinions about the case.

Cahill said that #121 was "not a very credible witness and was evasive... but there was not a basis for cause."

After using a strike to dismiss #121, Nelson has three peremptory strikes remaining.

Nelson argued that an evasive witness should be able to be dismissed for cause -- and Cahill said they could revisit that if he runs out of strikes.

Proceedings will resume at 9 a.m. Tuesday. A clerk advised both parties to prepare for potential longer hours that day.

The 14th person seated for the Chauvin jury is juror #118, a white woman in her 20s who is employed as a social worker, is newly married and told the court she has a new puppy.

She says within her family, there have been many discussions in which members say Chauvin's knee should not have been on George Floyd's neck for so long.

Attorneys on both sides questioned juror #118 extensively about her role as a social worker, whether she has called police during interactions with clients, and what her attitudes are on police officers. The woman said she does not support "getting rid of police," and strongly opposes defunding MPD despite problems within the department.

When asked about her attitudes about Black Lives Matter and Blue Lives Matter, juror #118 said she was neutral on both.

"I believe black lives matter as much as Latina, police etc"

Juror #117 was quickly excused by Judge Cahill after expressing great concern about her ability to communicate and understand the legal concepts the trial would require.

"My English is not perfect," she told the courtroom.

She told Judge Cahill that she only understood about half the legal concepts included in the instructions to jury candidates, and said she "doesn't understand all the words."

Noting that the Chauvin trial is likely to include complex testimony and legalese, Cahill excused the woman from service.

Juror #116 opened by telling the judge his company has recently changed a policy and no longer pays employees when they perform jury duty. When asked if serving on the Chauvin jury would be a financial hardship, he said somewhat, but said he would still serve. Juror #116 describes himself as a quiet man, who loves fishing so much he does it competitively. He says he is definitely not a news junkie, but did hear about the $27 million settlement between the city of Minneapolis and George Floyd's family.

The man says he has a neutral view of both Chauvin and George Floyd, and doesn't have enough information to form an opinion yet. After a short period of questioning juror #116 was dismissed when the state utilized one of its strikes.

Attorneys began questioning juror #115, a nursing assistant who describes herself as a "nice" and "honest" person who enjoys reading and watching Netflix. She told Chauvin defense attorney Eric Nelson that she was "shocked" to find out she was in the jury pool, has never been a juror, but has no fear of participating in the high-profile case.

Juror #115 told Nelson that she is not a regular consumer of news, but did see the video of the fatal interaction between Minneapolis police and George Floyd when it popped up on her Facebook feed. On her questionnaire the woman reacted to what she saw, writing "It was not his time to die, and the situation should not have gone as far as it did." Juror #115 told the courtroom she did take part in a couple of demonstrations protesting Floyd's death when invited by a friend.

Juror 115 personally participated in a couple marches, carrying a sign with a fist on it. She says her friend asked her to do it and they made the signs beforehand.

Still, she told Nelson she could be unbiased if seated on the jury. Chauvin's legal team used one of their remaining strikes to dismiss juror #115.

Judge Peter Cahill opened the proceedings Monday by addressing prosecutors and Derek Chauvin's defense team, telling them he read through further briefs on attorney Eric Nelson's request for a change of venue over the weekend, and has not changed his mind. That means the trial of the former Minneapolis police officer will remain in Hennepin County.

The most pressing ruling was that the former officer's trial will not be delayed or moved to another venue outside of Hennepin County.

"I don't think there's any place in Minnesota that has not been subjected to extreme amounts of publicity in this case," Cahill said, noting that he believes even people who have been exposed to news of the incident can be impartial jurors.

Chauvin's attorney Eric Nelson had requested that the trial be delayed or moved after the city of Minneapolis announced it had unanimously approved a $27 million settlement with Floyd’s family, the largest in the city's history.

Another major ruling on Friday involved admission of evidence and testimony in the May 6, 2019 arrest of George Floyd, an interaction similar to the one on May 25, 2020 that led to Floyd's death.

Cahill ruled that officer body cam video from the 2019 incident will be allowed from the time an officer approached the vehicle with a gun drawn to the time Floyd was out of the vehicle and handcuffed. He also said photos from 2019 of pills in the back seat of a squad car will be admitted, saying drug ingestion could have combined with a heart condition to play a role in Floyd's 2020 death.

"The cause of death is clearly an issue here," Cahill said, before noting Floyd's stressful reactions to being forced out of a vehicle at gunpoint in both incidents, and the possibility he had ingested drugs.

Judge Cahill also said he will not allow the prosecution to call forensic psychologist Dr. Sarah Vinson, an expert witness who would have spoken on Floyd's reactions to the police interaction that ended in his death, testifying that his reactions were consisted with claustrophobia and anxiety.

Cahill also said he would not allow the defense suggest that Floyd was "malingering" to cover up the presence of drugs, calling it speculative.

The judge said no testimony about Floyd's emotional state can be introduced, calling it irrelevant.