In July 2020, a judge overturned Dennis Perry's conviction. On Monday, he was exonerated after two decades behind bars. 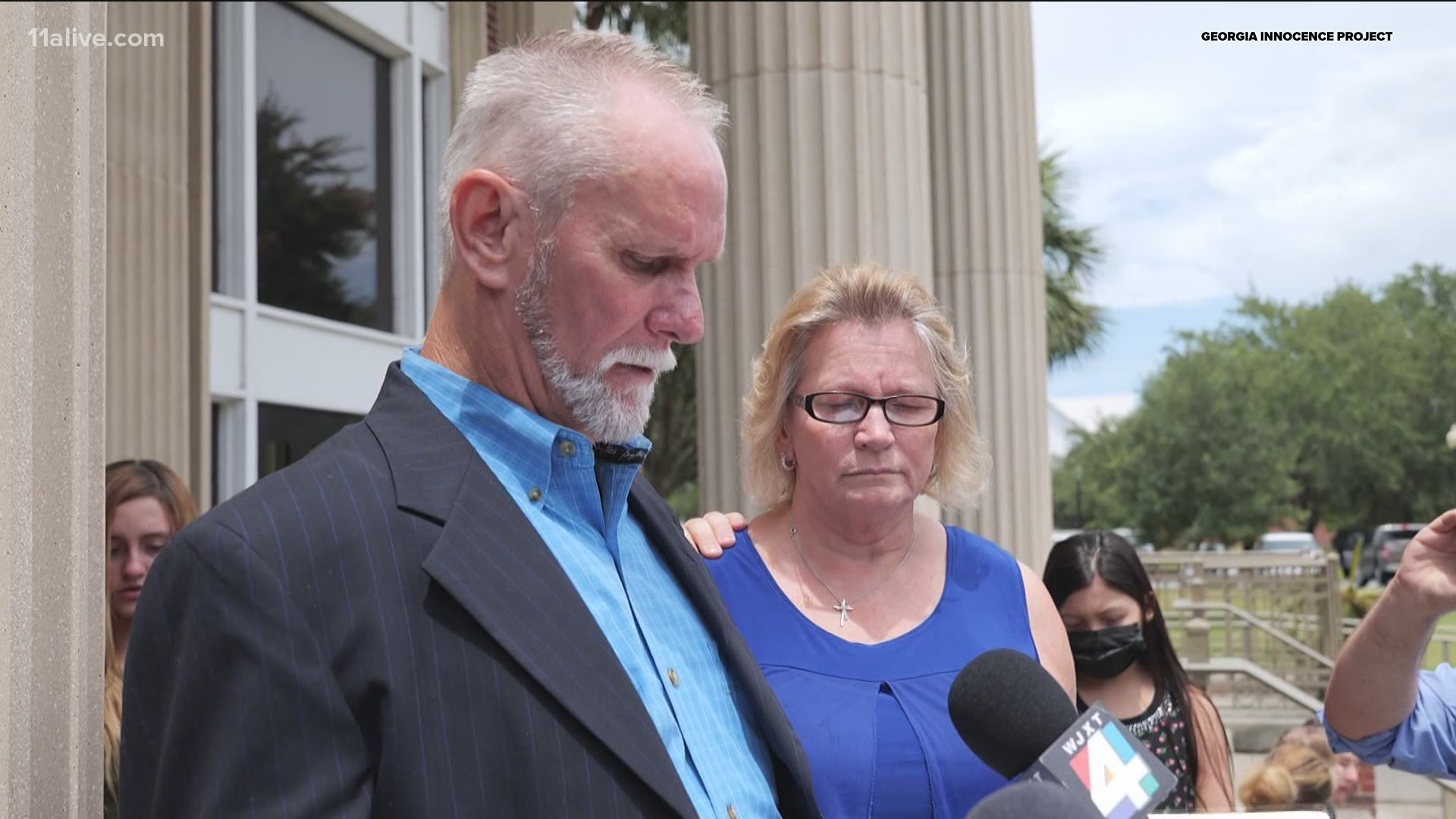 BRUNSWICK, Ga. — Dennis Perry was convicted and sentenced to life in prison in 2003 after a jury found him guilty of murdering a deacon, Harold Swain, and his wife, Thelma Swain, in 1985.

On Monday, at 59 years old, he officially walked out of prison a free man, after 20 years behind bars. A Brunswick Judicial Circuit judge accepted a district attorney's request to drop all charges against Perry.

"In 2000 I lost my freedom. I lost my grandmother - my best friend - I lost her in 2014," he said. "I lost my mother in 2017 and my father in 2020. I was never able to say goodbye or properly grieve them. These emotions you're robbed of while in prison. I'm grateful that this part of the nightmare is behind me yet I will deal every day with what happened to me."

In July 2020, a judge overturned the 2003 conviction against Perry. Clare Gilbert, executive director of the Georgia Innocence Project (GIP), said this was a long time coming. GIP has helped exonerate 9 other people ... Dennis is the tenth.

"This conviction never should've happened in the first place," Gilbert said. "We knew evidence was being lost and disappearing prior to the trial. We knew the eyewitness identifications were unreliable and yet he was convicted and no district attorney came along to fix that at any point in the interim."

Glynn County district attorney Keith Higgins, who took office in January, said his office is now working with the Georgia Bureau of Investigations to make a decision on whether or not to prosecute the other suspect.

"I did not believe Dennis Perry committed these crimes," he said.

Higgins said Perry will not be able to receive any compensation for his decades in prison.

"There's nothing in the state of Georgia that allows for any compensation for a wrongful incarceration or imprisonment or wrongful conviction so he's not looking at any monetary compensation under the current state of the law," he added.

Perry was represented by the Georgia Innocence Project and law firm King and Spalding.

His attorney, Susan Clare, stood next to him as he read a statement to the media.

"The State took from me... my freedom, my family, my health," Perry read while holding back tears. "My house... my pets. My business I was building. It was all taken from me because of a wrongful arrest and conviction. The possibility of having my own children and watching them grow."

In the courtroom, minutes before the judge announced the dropped charges, Perry turned around to his wife, Brenda, and family, who were on the other side of the plexiglass.

They sent him air kisses and drew hearts with their fingers. Now, Perry is glad he doesn't have to do that at a distance any longer.

"This is the culmination of over a decade of work," said Gilbert with the GIP. "You would think given that it's so easy to wrongfully convict a person, that it would be easy to correct a wrongful conviction after it occurs, especially in a case like this where it is so clear and there's so much misconduct that was involved in it."

Perry said he has no grudges and can put his faith back in the system. While Monday was a day to celebrate, the GIP says this could've gone in a different direction.

"He was tried on a penalty offense. He could've been executed," Gilbert added. "There were so many times along the way where we thought this day would never come."

Facebook group "Free Dennis Perry" posted a fundraiser for Perry. For anyone who wishes to donate, click here.

RELATED: They were convicted 30 years ago for rape, then exonerated when the real rapist confessed

Here's more on the case, according to our sister station First Coast News:

On March 11, 1985, the Swains attended a meeting at Rising Daughter Baptist Church in Waverly. One of the attendees excused herself at about 9 p.m. and found someone in the church's vestibule, according to a release by the Brunswick Judicial Circuit.

The man told the woman he needed to speak to 66-year-old Harold Swain. The woman left as Swain went to meet with the man. Witnesses heard a scuffle then four gunshots, the release says.

Thelma Swain, 63, ran into the vestibule and was also shot, the court states. The killer escaped the building shortly after.

The case eventually went cold but was reopened in 1998, which led to the arrest of Dennis Perry. Although Perry proclaimed his innocence, he nevertheless was convicted of murder. To avoid the death penalty, Perry accepted a deal in which he waived his right to file a direct appeal, according to the Georgia Innocence Project.

During the original 1985 investigation, detectives found a pair of distinct glasses with hairs stuck in the hinges that they believed belonged to the killer, the Brunswick Judicial Circuit says. While DNA testing in 2003 found the hairs did not belong to Perry, he was still convicted. The Georgia Innocence Project says Perry's conviction was largely based on circumstantial and character evidence.

The break in the case came in 2018 when the Perry case became the subject of the podcast 'Undisclosed.' The podcast thoroughly investigated the case, according to the Georgia Innocence Project, and identified an alternative suspect.

When the DNA was tested against a family member of the alternative suspect, it was a match.

In 2020, the Georgia Innocence Project and King & Spalding presented the evidence in court but then-Brunswick Judicial Circuit District Attorney Jackie Johnson refused to give her consent to a new trial.

However, due to the evidence presented by Perry's legal team, Brunswick Judicial Circuit Superior Court Judge Stephen Scarlet overturned the conviction, freed Perry and granted him a new trial in July 2020.

With a new district attorney on the case, the charges were formally dropped in July 2021. After two decades behind bars, Perry was officially exonerated of the crime.