State Rep. Sam Park (D-Lawrenceville) said he was driving in the HOV lane and talking on his phone because he was stuck in traffic. 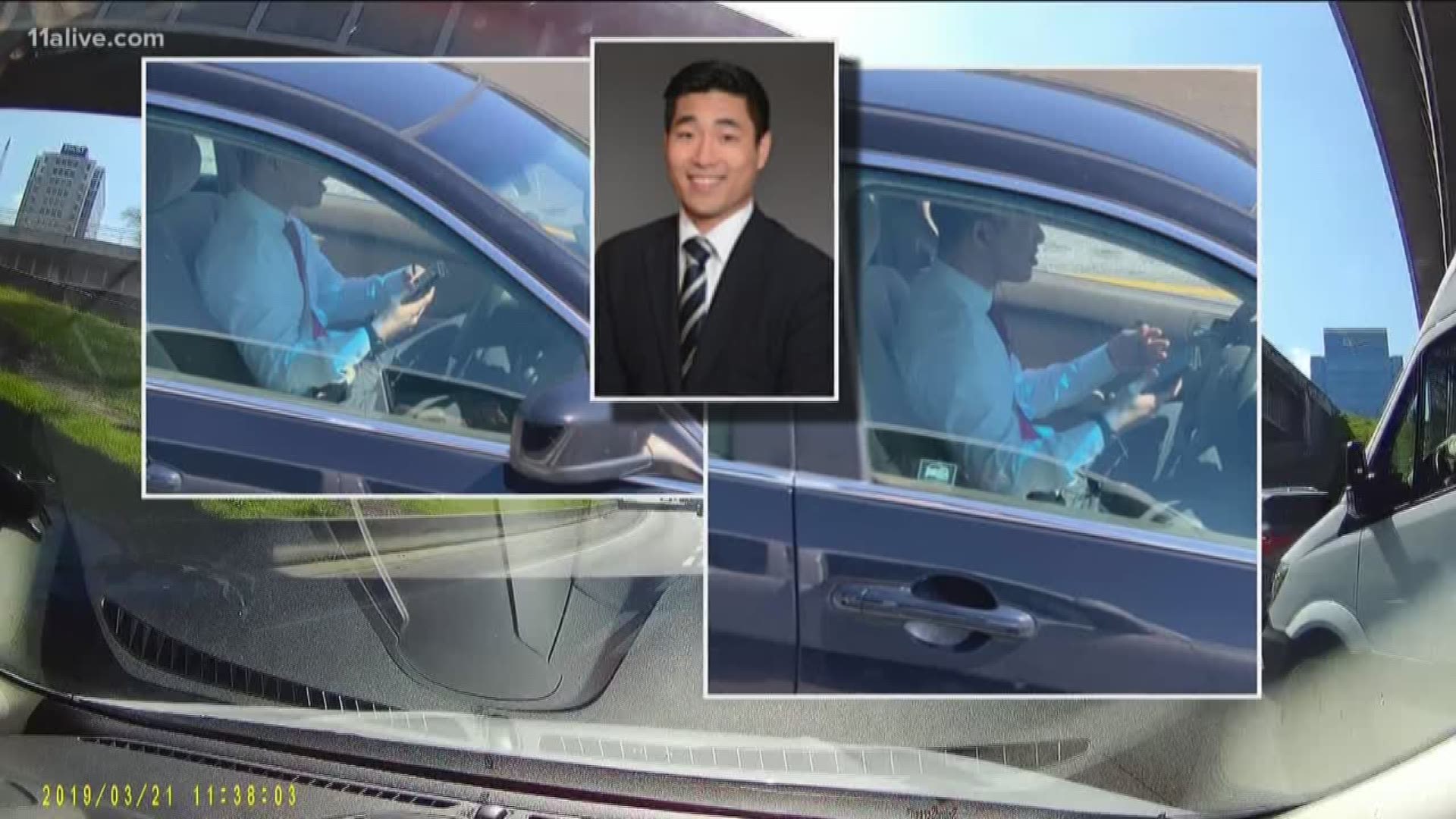 ATLANTA — Atlanta traffic is nothing to laugh at and, on the Downtown Connector, there are no secrets.

One year after the state legislature voted to prohibit drivers from holding cell phones while driving, an 11Alive viewer caught someone red-handed – and that driver happened to be a Georgia state legislator.

Jim Shumake was stuck in standstill traffic, Wednesday, heading south on the Downtown Connector, when he noticed Rep. Sam Park (D-Lawrenceville) next to him in the HOV lane by himself, talking on a cell phone.

Shumake said he recognized the lawmaker because he had an official tag on his car – SR 101, for "State Representative, District 101."

“He was not only on his phone, he was driving without hands on the wheel, having a deep conversation in the HOV lane,” Shumake said. “If that was anybody else, we would have been pulled over or received a ticket.”

“I just thought, this is absolutely ridiculous,” Shumake said.

Credit: Jim Shumake
Rep. Sam Park (D-Lawrenceville) was caught by another driver talking on his cell phone, hands off the wheel and driving in the HOV lane by himself.

Rep. Park was not caught by police, but he was caught by Shumake's camera, and when Shumake posted the photos on his Facebook page, commenters were quick to judge and "convict" Park, showing no mercy.

Park, who is in his second term at the State House, at first told 11Alive that he would be available to talk about the incident during a break in House proceedings but changed his mind and declined to be interviewed.

Park sent an email instead:

"Thank you for reaching out, and allowing me to respond via the following statement regarding the Facebook from yesterday:

"Yesterday, I was heading to my Industry and Labor and Higher Education Committees [at the State Capitol in downtown Atlanta], but got stuck in traffic due to a car accident near the City of Atlanta. To ensure I would not be late to my 2pm hearing, I got onto the HOV lane so I would not miss a vote. I also gave my colleagues a call to update them with where I was. I take very seriously my duties as a State Representative, and I apologize for driving in the HOV lane. I appreciate voters holding me accountable."

According to the state's hands free law, there are no such exemptions for state legislators.

The legislature approved the cell-phone driving restrictions a year ago because so many grieving families demanded action to stop wrecks caused by distracted drivers talking and texting on cell phones.

RELATED: Everything you need to know about Georgia's Hands-Free Law

When an early version of the bill came to a vote, Park voted to support it. But, for the final vote, Park was a no-show and excused from voting.

After seeing the photo of himself online, Park sent Shumake a Facebook message that said, in part, “thanks for holding me accountable.”

Shumake admits that he has some explaining to do as well – because he took the cell phone photos while he was driving, and the same law prohibits drivers from having cell phones in their hands for any reason, including to take photos.

“I couldn’t help myself," Shumake said, laughing as he realized his own mistake.  "You are correct, Sir, you are correct.”

As for exceptions to the law? Drivers are allowed to use cell phones “while reporting … an actual or potential crime or delinquent act.”

So, Shumake considers his photos to be a legal and approved public service – reminding one state lawmaker to comply with state law.

They followed him home from work, tied him up with wife to burglarize Buckhead jewelry store, police say