After a three-year legal battle, the state’s highest court handed down a decision in the Patton v. Vanterpool case on Monday, Oct. 16, legally ruling out the father—deciding that the children conceived by in vitro fertilization (IVF) in this case—have no father, legally speaking, overruling an earlier ruling by the Superior Court. 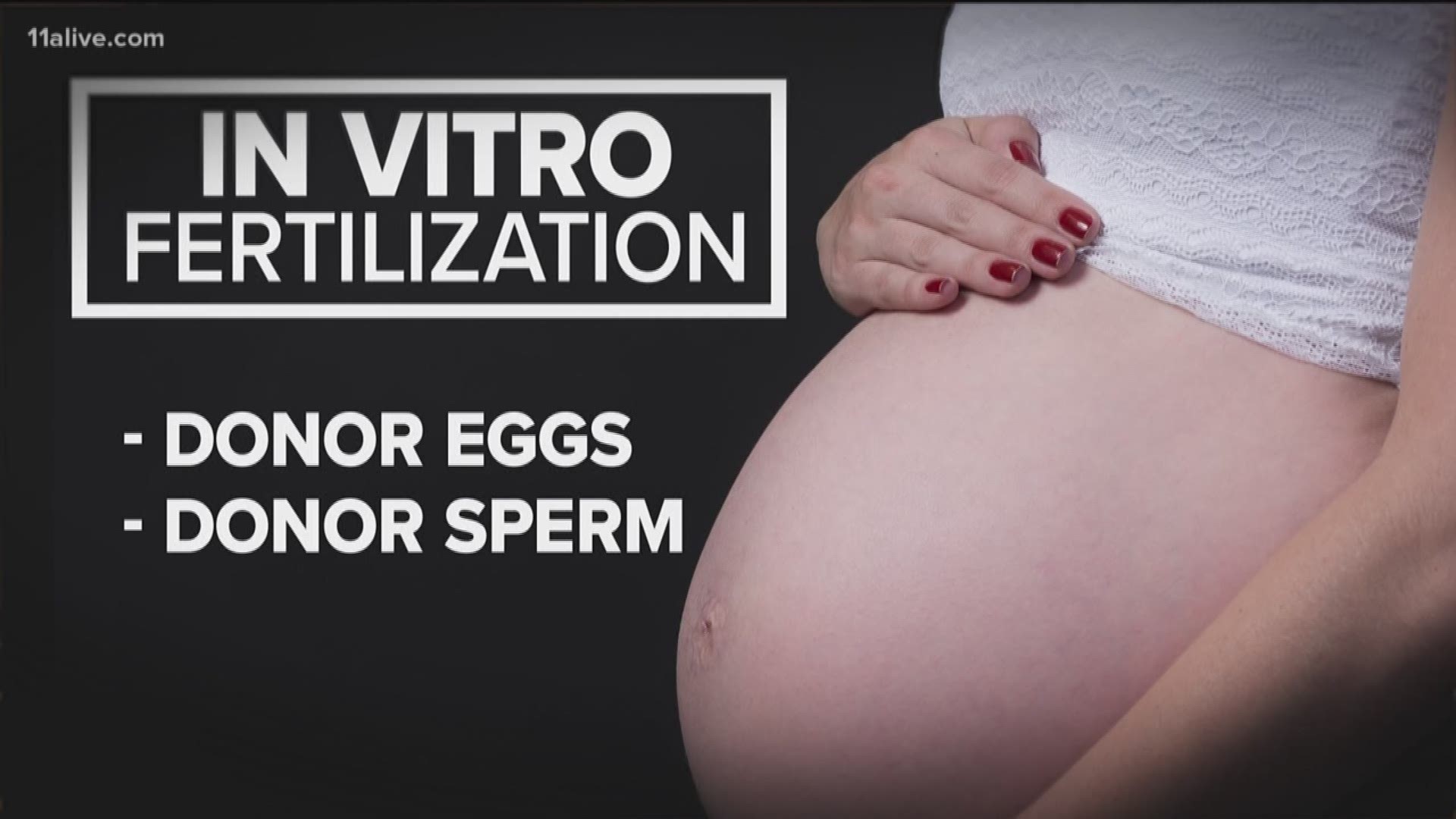 SAVANNAH, Ga. – The Georgia Supreme Court made a verdict that could change the life of any child conceived by in vitro fertilization in the state of Georgia.

After a three-year legal battle, the state’s highest court handed down a decision in the Patton v. Vanterpool case on Monday, Oct. 16, legally ruling out the father—deciding that the children conceived by in vitro fertilization (IVF) in this case—have no father, legally speaking. The decision overruled an earlier ruling by the Superior Court.

This opinion of the court could affect and set a precedence for a portion of the more than 70,000 infants that were born nationwide in 2015 via assisted reproductive technology, according to the Center for Disease Control—99 percent of those were IVF, which is the medical conception process of extracting eggs, retrieving sperm and manually combining the two in a Petri dish. The embryo is then injected into the mother.

In this case, Vanterpool was injected with an embryo that included donor eggs and donor sperm, not biological.

When David Patton, who serves in the military, divorced his wife, Dr. Jocelyn Vanterpool, in 2014, in Savannah, Ga., it was only the beginning of the couple’s legal bouts and a back-and-forth battle that would span six years, the birth of twins and Vanterpool becoming a single mother.

Their story began in 2011 when Patton and Vanterpool got married and started their lives together in Savannah.

Over three years of marriage, the couple experienced three miscarriages. But she didn’t give up on being a mother.

A mother’s desire to give life

“It is the greatest blessing on Earth for me. I grew up with a large family. I had six brothers and sisters. When I decided to marry, the culmination of that love was the creation of life, my children,” Vanterpool said.

But it wouldn’t be the fairytale she dreamed up her whole life.

“I had three miscarriages and two of them I had to have IVF with my husband. The last IVF was a success, but then my husband was deployed, and I had to fly back and forth—so it just took a toll on the pregnancy, so I lost that pregnancy,” she remembered.

Patton, she said, told her that they would do whatever they needed to do to have a baby, even if that meant going through IVF again.

But in January 2014, Patton filed for divorce.

During the pending divorce, the parties consented to undergoing IVF treatment, which would used both donor eggs and donor sperm.

On Nov. 10, 2014, Vanterpool traveled to the Czech Republic for the procedure.

“So, I went ahead and started the IVF process and then when I was ready to come back home, my husband said, 'Oh, I don't want to be married anymore.'"

Which took her completely off guard, she said.

"What are you talking about? We have to do this... This is a very important part of my life," she begged him. "I asked his permission to have the procedure done, and I said, 'I don't want any child support from you, however I want them to be legitimated and I want insurance [for them.]"

As a traveling doctor, she argued, she doesn't have a steady stream of insurance of benefits, so she wanted him to supply that for the conceived children and since he was in the military, it would be at no cost to him, she said.

Four days following her procedure, a final judgment for their divorce was entered in the courts on Nov. 14, 2014.

However, the divorce settlement agreement, reflected that, at the time of the agreement, neither were expecting children, as a product from the marriage.

During the hearing for their divorce, her attorney didn't mention the babies, because, she said, he didn't think it was important. Therefore, the divorce went through without a mention of the children.

Subsequently, when paternity came up, her ex-husband refused to assist her, she said, suggesting that she take him back to court.

On June 6, 2015, Vanterpool gave birth to twins—a boy and a girl. Her son, however, died a few months after birth.

The new mother requested that the superior court set aside the divorce decree, in an effort to include her daughter in the agreement. That motion was denied.

Following that motion, she filed a paternity action against her ex-husband, alleging that he gave written, informed consent for IVF, creating an “irrebuttable presumption of paternity.” She also sought child support from Patton, according to the court documents.

However, he argued that he did not consent to the IVF treatment.

11Alive reached out to Patton’s attorney, but Patton did not want to comment.

On his behalf, his attorney, Richard Sanders, said he signed the consent agreement under duress –claiming she refused to sign divorce papers until he signed the IVF consent.

As a result of her filed paternity action, the Superior Court ruled that Patton was legally the father. However, following that judgement, Patton appealed—taking the case to the Supreme Court.

In September 2016, the Supreme Court of Georgia granted Patton’s appeal.

When the Supreme Court's decision was released on Oct. 16, Vanterpool said, she couldn't believe what she was reading. It reversed the initial decision by the Superior Court.

“At first, I was in shock. When I got home and put my daughter to sleep, I read the entire document and I was so upset, I could not sleep. To me, it's unconstitutional; their rights were violated.”

The ruling, sans legal father, only acknowledged artificial insemination, not IVF, as an artificial form of conception, therefore determining that Patton was not the legal father to her children.

“OCGA § 19–7–21 creates an ‘irrebuttable presumption’ of legitimacy with respect to “[a]ll children born within wedlock or within the usual period of gestation thereafter who [were] conceived by means of artificial insemination. This appeal presents the question of whether that irrebuttable presumption applies to children so conceived by means of in-vitro fertilization. We conclude that it does not and reverse the judgment of the superior court,” Justice Carol Hunstein wrote in an 11-page opinion.

But, according to Vanterpool, it is just semantics for artificial conception—and said that they cited a 53-year-old law, not current with present-day technology.

“I was surprised that they used the term, 'artificial insemination' in the decision-making process because that decision was made in 1964.”

“Artificial insemination is just a simpler version of reproductive technology. It has evolved tremendously. So that advancement should be included—it's not something we should ignore. This is the reality that we're living today, so why would you ignore it and say, 'Back then?' That's all they had back then. They didn't have anything else but that. If they would have had IVF back then, they would have also included it, but they didn't have that. They were going off of knowledge based on that time.”

Vanterpool said that she understood that Patton did not want to be a parent to her children after the divorce, but still, she feels like it's unfair to her daughter, not to have a legal father listed on her documents for the rest of her life.

“I didn't ask him to be a parent,” she said. “All along, this is what we spoke about when we got married and you broke your word. So, can you fulfill your promise to me and to my children for the future? And, he agreed.”

Moreover, she said, he signed the forms in front of a notary public.

“It's not fair to them,” she said tearing up with emotion. “It's just wrong; they should have a legal father.”

Vanterpool, who travels throughout seven states giving medical care, now lives in Florida. But, she said, Georgia lawmakers need to make a change, start a discussion.

“These babies don't have legal parents—nobody agrees that they should come into the world? All those babies born to IVF's parents are not legal. They're not legitimized,” Vanterpool said.

The mother of a now-2-year-old daughter, wants the law changed to encompass the entire spectrum of reproductive technology because the legal ramifications are huge.

“The General Assembly has got to revisit this and meet and discuss it because it's not just me—it's going to affect thousands of families. It's unconscionable. It's not right, not right,” she said.