As power is restored and Texans continue to grapple with water issues, Gov. Abbott urges people to donate to Red Cross and not hoard food. 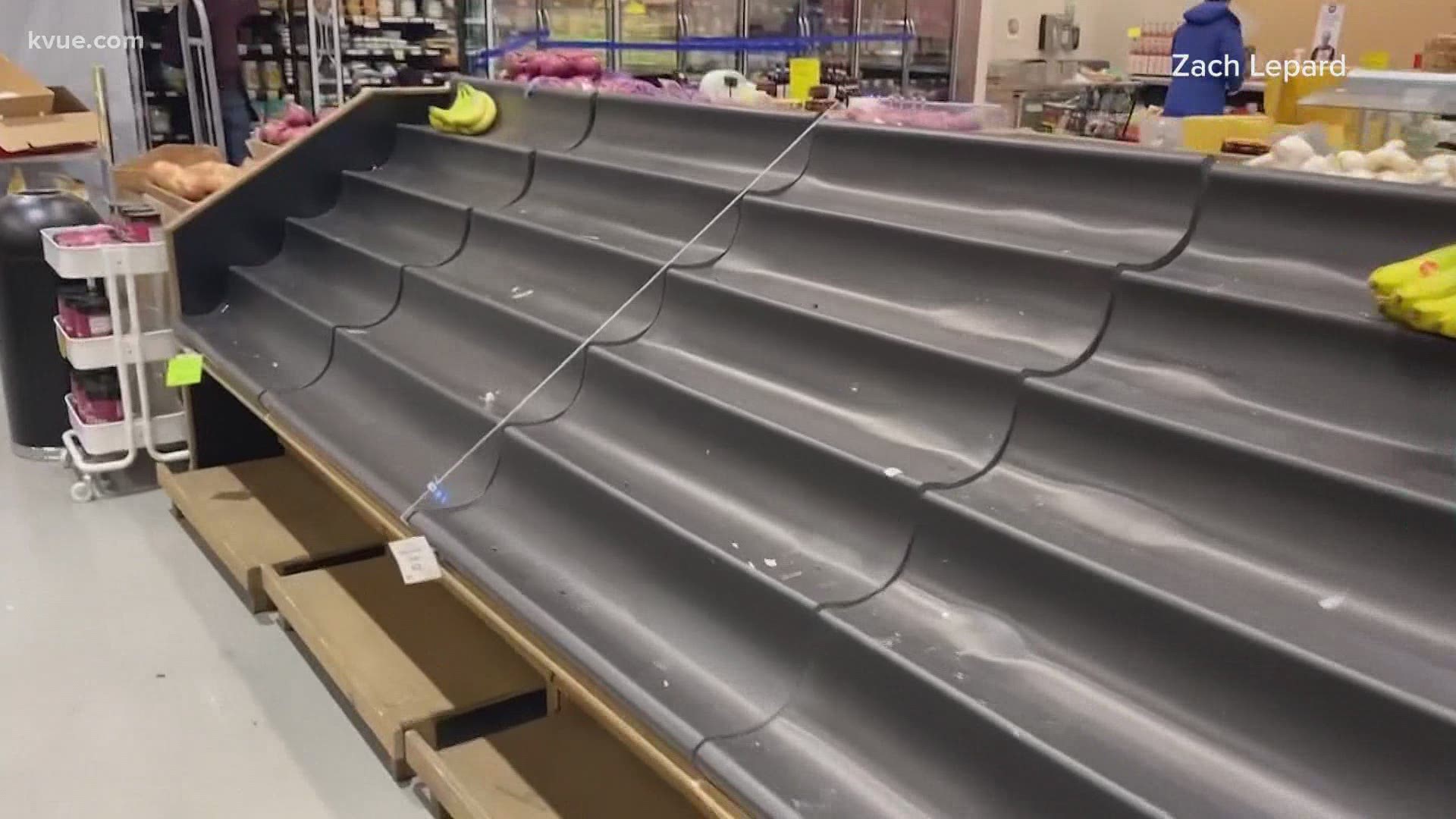 AUSTIN, Texas — During a news conference on Thursday afternoon, Gov. Greg Abbott and Chief of Emergency Management Nim Kidd addressed the food shortages happening in Texas due to the winter storm.

Getting food to Texans in need is one of Gov. Abbott's five priority tasks his office is working on. He encouraged people to help donate food, and to work with Red Cross.

"We have already begun the process to make sure that events like this never again happen in Texas," Abbott said.

RELATED: 'I'm taking responsibility for the status of ERCOT': Gov. Abbott says reform, getting aid to the state is top priority

Abbott said the State is working on replenishing the stocks for private food providers, such as grocery stores and fast food restaurants.

"There are others who need access to food, and we are working with local as well as some State-based agencies to make sure that we will be providing that," Abbott said.

Kidd talked about the importance of knowing food delivery distribution points and said they're working to get the roads clear.

"We're working with the utility providers in order to get their stores back up. We want [to help] residences first, and then quickly come into the industrial, so that we can provide those services," he said.

"I asked that we not hoard food," Kidd said. "This is going to get to the point where you take what we need and we will work through this together."

Kidd's office is working with local and private partners and FEMA to provide Texans with emergency drinking water. Residents who have running water are asked to conserve. One of the biggest challenges will be to restore industrial water to institutions like churches and hospitals, Kidd said. But generators have been requested.

Commission of the Texas Department of Agriculture Sid Miller also spoke to KVUE about the food supply problem in Texas earlier on Thursday.

"The shelves are bare of any type of dairy products, no eggs. Fruits and vegetables we're pretty OK on," Miller said.

Miller also said this storm has devastated the agricultural industry. He estimates at least a half-billion-dollar impact. He also said people will likely feel the effects of that impact in grocery stores for the next few weeks.

Low food supply in Texas is also hitting hunger-relief charities hard, which is impacting Texans in need. The Central Texas Food Bank has had to cancel food distribution events this week.

"Our fleet, our equipment, our facility, our operations are taking a pretty heavy hit with these extremely low temperatures and hazardous road conditions," President and CEO of Central Texas Food Bank Derek Chubb said.

President and CEO Derek Chubb said they haven’t lost any food so far. He thinks the food bank can make it through next week.

But if supply is adversely impacted like Commissioner Miller said, it could create problems for Texans in need.

"Today and next week, we're good," Chubb said. "Where if you and I are having this conversation a week-and-a-half from now, we could be having a very different conversation."

Gov. Abbott recommends Texans who want to help improve the food supply go to this website.

Toilet Tips: How to use your toilet without running water