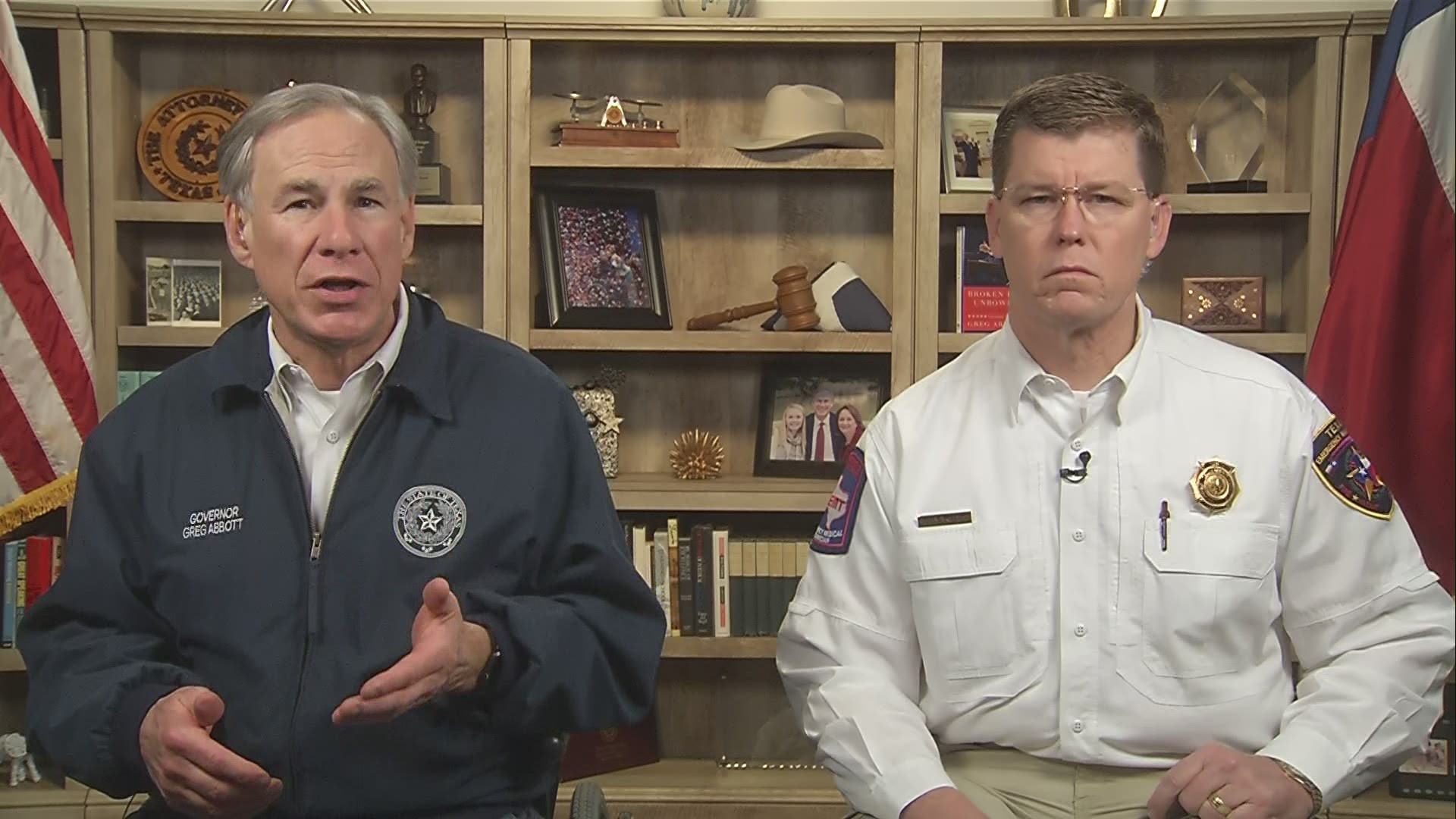 DALLAS — During a live interview Tuesday afternoon, Gov. Greg Abbott called for more transparency and more answers from the state's utility leaders amid the millions of Texans who have lost power during the state's winter storm.

Abbott said the way The Electric Reliability Council of Texas (ERCOT) has handled the current situation is "completely unacceptable" and that people shouldn't have to go more than a day without power.

Gov. Abbott said Texas should currently have rolling operations when it comes to outages.

"ERCOT has not been transparent about this," Abbott said. "We, all of us, need answers and transparency from ERCOT to make sure that people get the answers they need. More importantly, get the power they need."

Bruce Bullock, director of SMU's Maguire Energy Institute, agreed, saying Ercot had done as well as it could given the situation, except for one area.

"We're not seeing a great deal of communication out of them," Bullock said. "It's one of those situations where people want more information as to not only how is this happening, but what can we expect."

Abbott said the Texas Legislature will begin "immediately investigating" the situation and "drill down into it" to make changes to ERCOT's structure.

"The public has a right to know what ERCOT is doing," Abbott said. "How they are making their decisions and why they are."

Some, like Jesse Jenkins, think we have to wait to get the "complete picture" to figure out who is to blame. Jenkins is an associate professor with Princeton University’s Center for Energy & Environment.

"Across the board, from the system operators, to the network operators to the power plant owners, and architects and builders that build their buildings, they all made the decision not to weatherize for this kind of event, and that's coming back to, to bite us in the end," Jenkins said.

However, Jenkins said it is difficult for some organizations, like ERCOT, to plan for unprecedented weather events.

"They [ERCOT] publish a winter reliability report every year and plan for extreme events, you know, 95th percentile probabilities," Jenkins said. "This event is outside of all that planning, the extreme scenarios. They've had more demand. They've lost twice as much generation, as they expected, in even the most extreme scenario that they plan for."

When asked when power will be back on for Texans, Gov. Abbott didn't give a time or day but said "that is the question that I am asking and that the public needs an answer to from ERCOT."

Abbott said this membership-based 501(c)(4) nonprofit corporation and independent system operator is in charge of the transmission of power across the entire state of Texas.

"We will look at all strategies whether it is to punish or incentivize, but the bottom line is to get results," Abbott said in reference to calling all utilities before the State Legislature to get answers to why this happened. "You would have expected—we expected that the utilities would have winterized their equipment for something like this."

What has happened to the state's power grid these past few days is the worst-case scenario, according to SMU's Bullock.

"What can go wrong has gone wrong," Bullock said.

The business economics professor said he believes there are three main reasons this power outage situation has happened: the demand for natural gas, mechanical issues at power plants and the frozen wind turbines.

Bullock said while much of the natural gas available has gone towards Texans' homes, the state's power plants need this fuel as well but aren't getting what they need.

When asked if there will be outages of natural gas in the coming days, Abbott did not give a clear answer but said he is asking the providers to do what they can "accelerate the process" to get their natural gas where it needs to be.

Abbott said the operations from the companies that generate power have "frozen up" or have "tripwired." He says they are non-operational.

In terms of the power plants, Bullock said certain mechanical issues caused by the cold temperatures are making it difficult for water to flow properly.

Bullock said a good portion of the state's wind turbines in West Texas have ice on them and can't provide power.

"So you combine all three of those and the states’ ability to generate power right now is down roughly 25—30% over what it would normally be during a day like this," Bullock said.

RELATED: 'I really think this is criminal': WFAA viewers getting heated about being left in the cold by ERCOT

Bullock said he doesn't believe deregulation placed a significant role in these power outages given that the entire country is dealing with issues connected to the winter weather.

Bullock said one possible way to improve the state's energy setup moving forward would be to look at some of the power grids from the northern states, such as Minnesota, for guidance.

Gov. Abbott said he was on the phone with President Joe Biden Tuesday, discussing if there will be any extra funding for Texans' electricity bills, natural gas prices and busted pipes from this week.

"Those will be details we will be working with homeowners on," Abbott said.

WFAA conducted a 20-minute interview with the CEO of ERCOT Tuesday morning, talking about the current electric crisis in Texas. You can read that full transcript here. 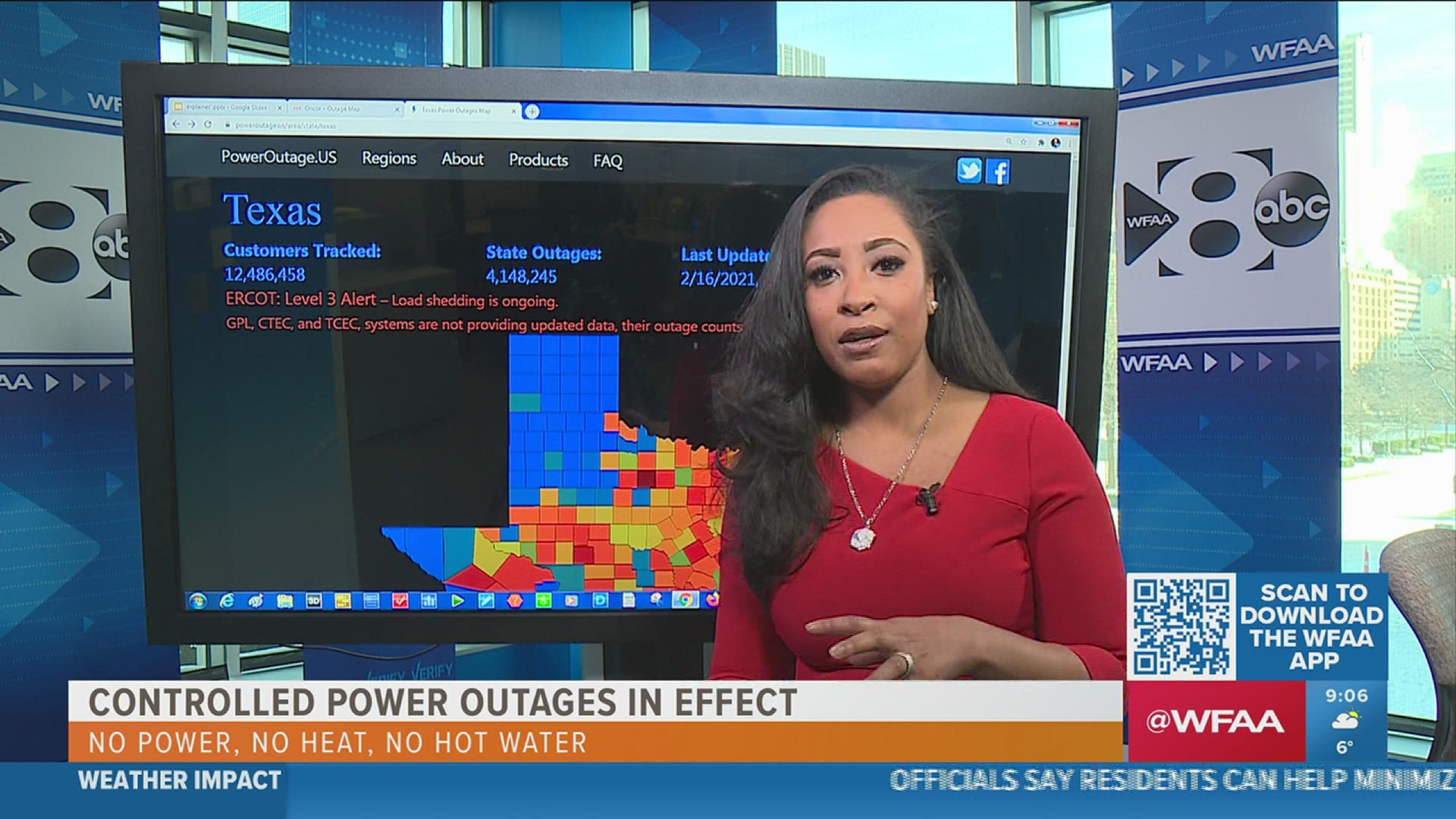