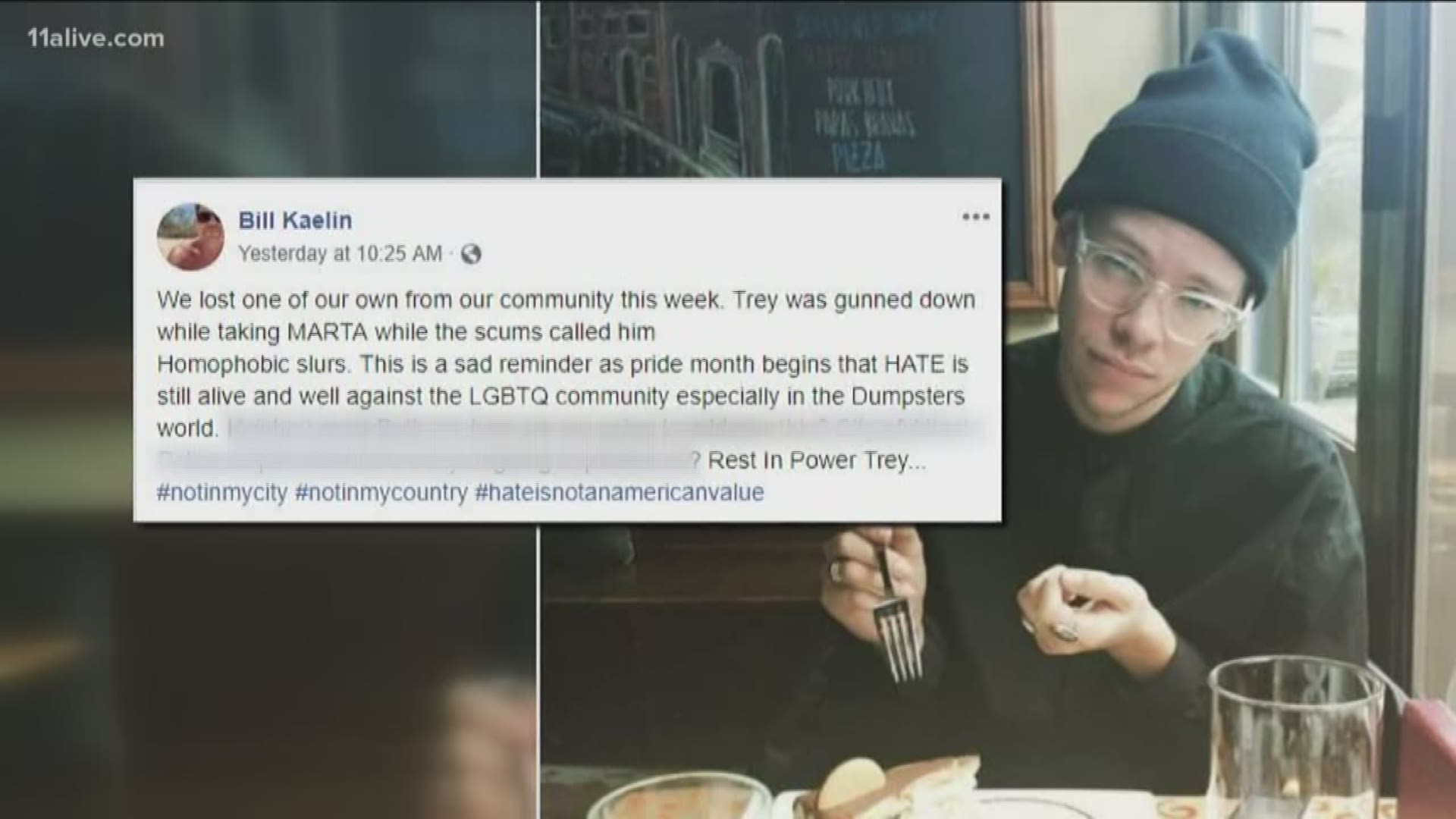 DEKALB COUNTY, Ga. — Police are searching for the suspects who gunned down a man as the day was just getting started in what may be a hate-motivated crime.

It happened in the 3400 block of Orchard Circle near Decatur around 9 a.m., Tuesday.

According to a police report from the DeKalb County Police Department, Ronald Peters' partner told police Peters was on the way to the MARTA station that morning to get to work.

Witnesses told officers that they saw the 28-year-old walking down the sidewalk when two men got out of a maroon four-door truck, put masks on and demanded Peters "give me your bag, f*****." The witness told police that one of the men then shot Peters once in the chest and again in the neck after Peters fell to the ground. Police found two shell casings at the scene.

One of those witnesses, Kevin Pickering, told 11Alive's Hope Ford that he tried to intervene before the violent shooting.

"I stood up and said, 'we don't say that type of stuff in this neighborhood,' and I seen the driver get out and pull a mask over his face," Pickering said.

Then, he saw Peters fall to the ground.

"So, I started coming off the porch," Pickering recounted. "By the time I got halfway, the driver was standing over him, jerked the bag and yelling obscene and gay slurs at him, and shot him in the chest point blank.”

The suspects then took his bag, according to the report, and drove off headed south on Columbia Drive. Those witnesses added that at least one other person was seen inside the car - possibly a getaway driver.

According to the report, Peters' partner told police that there was a previous encounter between Peters and two unidentified men who had harassed him and called him the same homophobic slur, but they didn't think anything of it at the time. This encounter, however, whether related or not, resulted in Peters' death.

Pickering noted that he also saw the same maroon truck with dealer tags, speeding back and forth through the neighborhood.

While police have not commented on whether they are investigating the incident as a hate crime, the police report related to the incident has a check mark next to an indicator saying the shooting was "hate-motivated." Even if that is the case, however, it wouldn't likely result in stronger charges for the suspects if or when they are arrested. That's because Georgia does not have a hate crime law on the books.

Online, people in the LGBT community are calling Peters' death a "sad reminder" of their struggles - especially as Pride Month begins.

"We lost one of our own from our community this week," the post read. "HATE is still alive and well against the LGBTQ community."

A GoFundMe campaign has been established in Peters' memory to raise funds for a memorial service.

Bill Kaelin
We lost one of our own from our community this week. Trey was gunned down while taking MARTA while the scums called him Homophobic slurs. This is a sad reminder as pride month begins that HATE is...

Precious Harris died with cocaine in her system