DACA recipient who is an activist, artist completes mural on same day as Supreme Court ruling

As the Supreme Court was ruling on DACA, Yehimi Cambrón was making her mark in Hapeville. 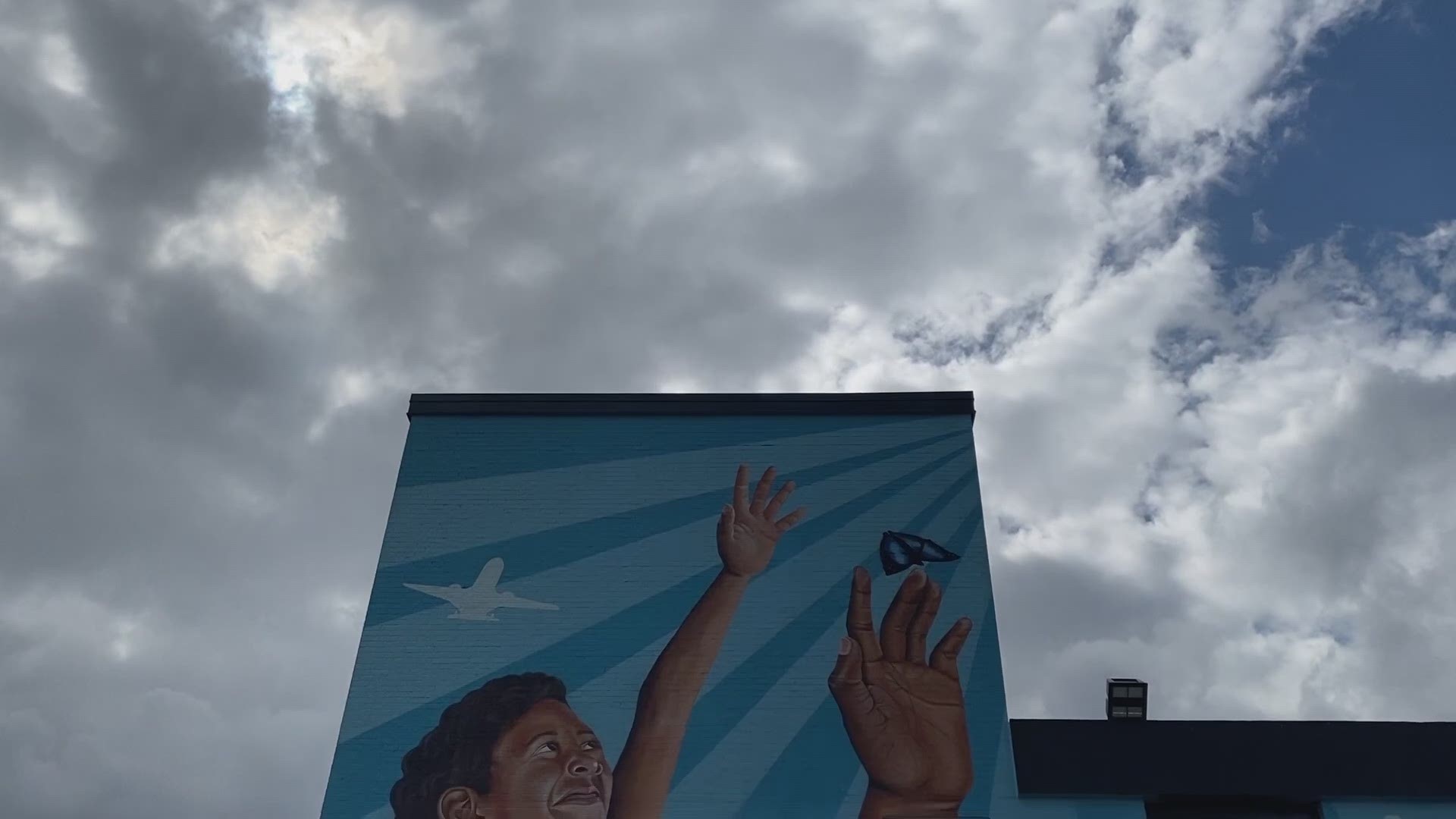 HAPEVILLE, Ga. — ‘We give each other the world.’

That’s the name of the latest mural completed by local artist, activist, and public speaker, Yehimi Cambrón. It's her largest project to date.

The seven-story mural encompasses the entire southern side of an extended-stay motel in Hapeville. A paid commission was arranged by the city of Hapeville by Councilmember Chloe Alexander through the National Endowments For the Arts.

The painting, which is visible for several blocks along Central Avenue, is what Cambrón calls a "community-responsive mural.”

It incorporates actual imagery of local grade-schoolers that reside in Hapeville being lifted up by the hands of the adults that came before them. The final touch is an array butterflies, which is Cambrón’s signature, surrounding the children.

Little did she know that on that actual day she signed her artist’s signature to her biggest artistic achievement, that the nine members of the United States Supreme Court were making a rather significant accomplishment themselves.

Credit: Local artist/activist Yehimi Cambrón presents her latest mural titled 'We give each other the world.’

A handful of days later, she stands beneath the scant shade provided by the very crane she used to complete her mural, Cambrón can barely restrain her joy which she tells My East Point News is bittersweet.

“This moment makes me think about all the work that undocumented people did in the first place to get us DACA,”, said Cambrón.

“We need something more permanent solution,” she goes on to add, “It's more of like a band-aid solution to something that needs surgery.”

That very same Thursday, the Supreme Court blocked the President’s efforts to eliminate DACA (Deferred Action for Childhood Arrivals) in a tight 5-4 ruling.

Cambrón, who is a DACA recipient, along with approximately 21,600 in the state of Georgia and 650,000, nationwide will retain their protection from deportation and work visas in the United States.

The immigration policy was first signed in law by President Barack Obama in 2012.

RELATED: What is DACA? | Answering 10 of the most-searched questions on the Supreme Court ruling

Its recipients, more commonly known as ’Dreamers’ allows unlawful immigrants who entered the United States as children protection against deportation as well as work-permit eligibility in the U.S.

“So for me, this moment of the Supreme Court ruling that Trump didn't rescind DACA appropriately is a win for us. But it's also a reminder that we have to keep pushing the conversation beyond this,” Cambrón said.

The mural can be seen on the InCity Suites Extended Stay Hotel on N. Central Ave and Stillwood Dr. That's located on the edge of Hapeville near the neighborhood of Virginia Park.

RELATED: Artists explains what her ‘We give each other the world' mural means