It's seriously so good: 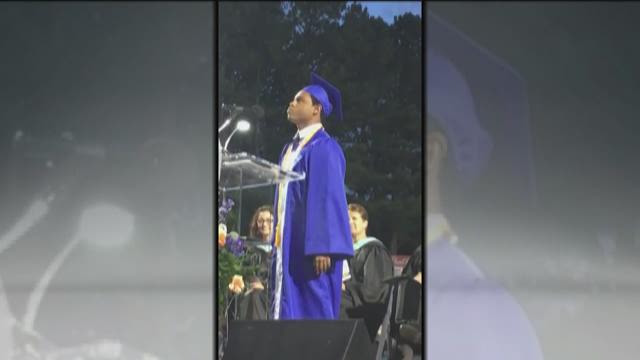 LILBURN, Ga. -- Graduation is a time for the usual speeches and pomp and circumstance, but during a local high school's graduation ceremony Wednesday night, one student's creative take on his speech has left people buzzing.

In the midst of all the rain and dark clouds, Parkview High School seniors were ready to take the first steps into their next chapter.

"We were so worried it was going to get canceled because of weather," long-time school teacher Karen Tolmich told 11Alive. School staff had already canceled plans for the band and chorus to perform because they didn't want the instruments to get wet. Fortunately, the weather held up. But as it turned out, the ceremony didn't need blue skies to experience a bright moment that would come from one of the graduating seniors.

Roman Banks, 18, was selected to be one of the speakers at Wednesday night's ceremony. The students had already been listening diligently to several speeches. And then, with a light breeze blowing, Banks took the stage...and sang the first few notes of his speech.

"It sounds silly to say, but it was magical," Tolmich said. "Everybody got chills. People were crying!" 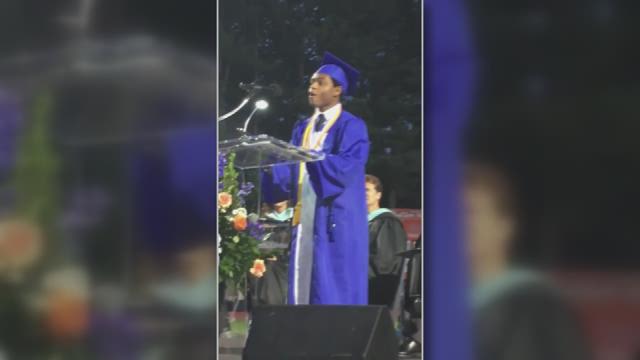 Banks, who has been performing in theater productions throughout high school, said he was inspired by a performance by Hamilton cast member Leslie Odom, Jr. Odom, who played Aaron Burr, sang a rendition of "Forever Young" by Bob Dylan at an Obama event in November and Banks said he knew right away that he wanted to sing it.

"As a musical theater student, I love the show Hamilton and, specifically, the role of Aaron Burr -- that is my dream role," Banks told 11Alive. "Leslie Odom, Jr., he's been my inspiration."

Banks said that he's been singing the song over the past year, and has improved his singing through training and performances. Then, two weeks ago, he really started ramping up practices and singing it every other day, until it all came to a culmination on Wednesday night.

The moving, roughly three-minute performance (accompanied by some unexpected fireworks -- "Everyone thought it was my doing, but it wasn't," Banks swears) brought students and teachers alike to their feet, after Banks finished.

"They started pounding on the bleachers and it sounded like this big thunder noise," Banks said. "It was unreal!"

Tolmich said in her two decades of teaching, she's never witnessed something like that. "I love our high school, and people don't often see how amazing teens are," she said. "I hope this gives a glimpse of how awesome they are."

As for why Banks chose the song, the recent grad said he thought it fit the situation perfectly.

"I read through it and thought it was the best blend of positivity and motivation," he told 11Alive. "So, after reading through it and after hearing it and how it impacted me, I knew that the lyrics were perfect for the occasion. I just really believed it could impact people."

Banks' hunch was right -- it's already gotten an overwhelmingly positive response on social media after Tolmich shared it on her Facebook page and YouTube channel, where it's already gotten several thousand views. The Parkview physics teacher told 11Alive she usually sits in the front by the stage, so she had a good view and was able to capture the emotional moment.

"I've had people coming saying to me that they've never seen a graduation like this," the long-time educator told 11Alive. "I've had people say they've cried and tears. People have told me they hear bad things about teens all the time, so it's nice to hear a story about someone who's motivated and someone who's honed their craft."

Banks said he's been touched by the response as well. One day after graduation, he said he was at the bank with his mom, who showed the video to an employee. He said at the end of it, the employee was welling up with tears.

"Just to see I had that effect on someone, even a person who knows nothing about me, is insane," he said. "It makes me really happy."

The 18-year-old is attending Shenandoah Conservatory in Winchester, Va. where he plans to study musical theater. But before he goes, he'll be starring in a production of James in the Peach and participating in a three-week summer intensive with the Alliance Theatre. And also squeezing in an all-important trip to Disney with friends.

As for his future, Banks said he has dreams of seeing his name in the Broadway lights. But until then, he said he's just grateful for the support.

"It's unreal, but I'm really just thankful God's been able to use me because the impact has been so positive," he said. "I feel blessed."