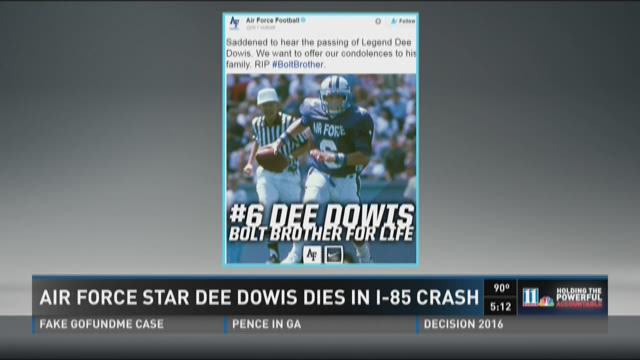 A former Heisman Trophy finalist and record-setting college football quarterback was killed in a two-car accident on Interstate 85 Monday morning.

The accident took place just before 4:45 a.m. on the I-85 northbound north of the Flowery Branch overpass.

According to Gwinnett County Police, Michael Dowis, 48, of Simpsonville, South Carolina, was traveling south in the northbound lanes in a 2014 BMW. The BMW pulled into the center median and began to back up.

As Dowis' car was backing up in the center median, it was struck on the driver's side door by Jeremy Weiss, 22, of Raleigh North Carolina, in a 2015 Subaru.

Weiss was transported to the Northeast Georgia Medical Center in Braselton while the Accident Investigators Unit responded to the scene.

Dowis was a record-setting quarterback for the Air Force Academy Falcons. According to the Air Force Athletics website, Dowis placed sixth in the voting for the Heisman Trophy in 1989. That season, became the fifth-ever play to run and pass for at least 1,000 yards in a single sesason. He is the Falcons' all-time career rushing leader with 3,612 yards -- at the time an NCAA record for a quarterback. He holds a number of other Air Force records, including touchdowns in a game (six) and most points in a career (252.

Dowis grew up in Royston, Ga. He was a district manager for Pfizer Pharmaceuticals in South Carolina,according to the AFA website.

Saddened to hear the passing of Legend Dee Dowis. We want to offer our condolences to his family. RIP #BoltBrother. pic.twitter.com/VRRlm8HuS7

"Pound for pound, he was one of the greatest, most gifted and talented players to have played the college game," former Air Force coach Fisher DeBerry told the Colorado Springs Gazette. "Everybody in America had so much respect for him. And as great a player as he was, he was even a greater friend. His life never was about himself. All he wanted in life was to give back. This is just so tragic."

According to police, Dowis was not wearing a seatbelt. They are not sure why he was driving in the wrong direction.

1 / 87
Actress Barbara Tarduck passed away on December 26, 2016 (. (Photo by Frazer Harrison/Getty Images for THE TONY AWARDS)