Lisa Williams knows from experience what can happen when officers are in a rush to respond to a call. She lost her arm after an Atlanta Police cruiser slammed into her car.
Author: Staff
Published: 9:07 PM EDT June 5, 2018
Updated: 11:08 PM EDT June 5, 2018

An example happened again Tuesday evening, during rush hour, when a police chase ended with a car dangling over a retaining wall near I-20 and Capitol Avenue.

One local woman knows from experience what can happen when officers are in a rush to respond to a call. Lisa Williams lost her arm after an Atlanta Police cruiser crashed into her car back on Feb. 21. She's now calling for the city to pay for her medical bills.

The collision happened when the officer blew through a red light at Peeples Street at Ralph David Abernathy Boulevard in southwest Atlanta. First responders had to pull her from her crumpled vehicle that had been pinned against a pole. 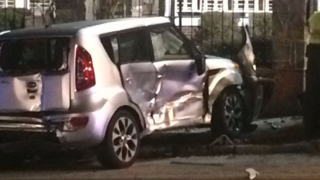 The department said the officer had the lights and siren on when the accident happened. But Lisa WIlliams said she neither heard nor saw the officer coming. The officer ended up T-boning her car.

Williams said the force of the impact was so violent it ripped her left arm from her body. She said when one officer saw her injuries, they started screaming.

"It was only when she started screaming that I realized my arm was missing, and I think it got thrown outside I think the door," Williams recalled.

The officer only suffered minor injuries. Williams was taken to Grady Memorial Hospital.

But months later, Williams said her injuries and the debt caused by her medical bills have now left her homeless.

"It's been very frustrating," she said. "I've applied for all the services, as far as disability, and those things have been denied to me. Nothing is happening."

While Williams lost her arm, she feels luck she did not lose her life. But when it comes to police pursuits or high-speed responses, many have not been so fortunate.

Data from the website Statista showed Georgia is among the top three states for deaths related to police pursuits.

Between 1996 and 2015, California led the way with more than 800 deaths. Texas had 762, while Georgia had 369. But those numbers don't include 2016 to this year. According to USA TODAY, most of those fatalities weren't for felony pursuits, but usually traffic violations or misdemeanors.

And in many cases, innocent bystanders have been struck by vehicles being pursued by officers – like the incident that claimed the life of a grandmother and two kids – costing municipalities millions of dollars lawsuits.

Meanwhile, Williams is now depending on the kindness of others in hopes of raising enough money to pay for her care. On Thursday, the Shrine of the Black Madonna Church will be holding a fundraising event to pay for a prosthetic arm to cope after he life-changing injury.

"I have no income," Williams concluded. "I'm not really able to survive under these circumstances."