Group who partnered with contractor: 800K meals for Puerto Rico stuck because of botched deal

The CEO of Breedlove said he and his group did exactly what was asked of it to provide hurricane relief. But because of an Atlanta contractor's botched job, 800,000 meals for Puerto Rico are stuck in a warehouse. 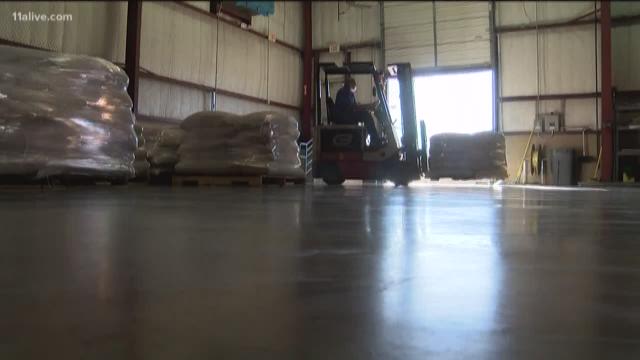 ATLANTA — Nearly a million meals, which were supposed to part of a large delivery for hurricane victims in Puerto Rico are still sitting in a warehouse months later after an Atlanta contractor botched a FEMA contract worth $156 million in tax payer money.

On Tuesday, 11Alive reported how Tiffany Brown, the sole owner and employee for Tribute Consulting LLC, won a contract from the Federal Emergency Management Agency in early October to deliver 30 million meals for the island slammed by Hurricanes Irma and Maria. Instead of the 30 million meals, though, government records show only 50,000 of them made it into the hands of hurricane victims who needed them to survive.

Just 20 days after Brown was awarded the contract, FEMA ended up terminating the contract, citing "late delivery of the approved heater meals." She was compensated for the 50,000 meals, and the rest of the money remained unspent.

But 11Alive discovered that the Puerto Rican people aren't the only ones who got shortchanged from Brown's failure. Government records show Brown hired two subcontractors to assist with the meal prep – Cooking with a Star LLC and Breedlove Foods Inc. Both stopped producing meals when they allegedly did not receive payment on time.

While Cooking with a Star declined to comment publicly right now, Breedlove's CEO Bill Miller agreed to speak off-camera to 11Alive's NBC affiliate in Lubbock, Texas. Miller said they now have a warehouse full of food – 800,000 meals – and no idea what to do with it all.

The packages were supposed to be shipped out of the warehouse to hurricane victims four months ago. Instead, they're stuck in limbo.

After Brown won the contract, Breedlove agreed it would ship at least 26,000 dry vegetable and rice meals a day for 30 days as part of the 30 million meals Brown promised FEMA. Miller said Breedlove adjusted its production schedules to make sure they could fill the order, but when the first shipment was set to go out, it got rejected because the agency's contract with Brown had been terminated.

Miller said he and his group did exactly what was asked of it and said it has issues with Brown's company, but until those issues are resolved, the 800,000 meals will stay stuck in the warehouse. He said they will try to make sure the meals don't go to waste, but because the dispute could be part of a legal matter, they can't touch them yet.

11Alive has repeatedly asked for an interview with Brown to offer her a chance to respond to the situation and accusations against her, but she has not accepted. 11Alive's Faith Abubey was able to reach Brown's publicist, who said "the government simply f-'ed up."

But in a scathing letter from ranking members of the Federal Oversight Committee to Chairman Trey Gowdy, Elijah Cummings and Stacey Plaskett blast FEMA, writing "It is difficult to fathom how FEMA could have believed that this tiny company had the capacity to perform this $156 million contract."

According to the Feb. 6 letter obtained by 11Alive, Brown apparently told representatives directly in a phone call that FEMA awarded her the contract because "I was able to submit a proposal to supply 30 million meals at the cheapest cost." Brown told staffers she stated she would work 24/7 to provide the meals and explained that FEMA "knew she could not independently finance the production and delivery of this many meals in such a short timeframe."

The letter goes on to cite previous failures from Tribute in failing to fulfill other government contracts of less tha $100,000, including some from the Federal Prison System and the Government Publishing Office, that should have been red flags to FEMA. Documents show she was also flagged by one government agency as "ineligible" for contracts of more than $30,000 through January 2019.

11Alive asked FEMA what the agency did to vet Brown's company. The agency said it thoroughly researched Tribute Consulting, LLC before awarding her the contract. It continued to say Brown was only flagged within that specific government agency that listed her as ineligible, so legally, they couldn't deny her a contract because of that.

After the allegations have come to light, however, Congressional leaders have called for an investigation into FEMA's awarding of the contract. Lawmakers have also called for a subpoena against the agency to force them to provide documentation related to the contract. If documents are not released by their Feb. 13 timeline, committee members said the matter will be placed on the agenda for the next scheduled meeting.

1 / 19
Destroyed trees and houses are seen after the passage of hurricane Irma and Maria in Orient Bay, St. Martin, on September 20, 2017. After killing at least nine people in the Caribbean, Maria slammed into Puerto Rico's southeast coast at daybreak before churning across the US territory which is home to 3.4 million. / AFP PHOTO / Helene Valenzuela (Photo credit should read HELENE VALENZUELA/AFP/Getty Images)