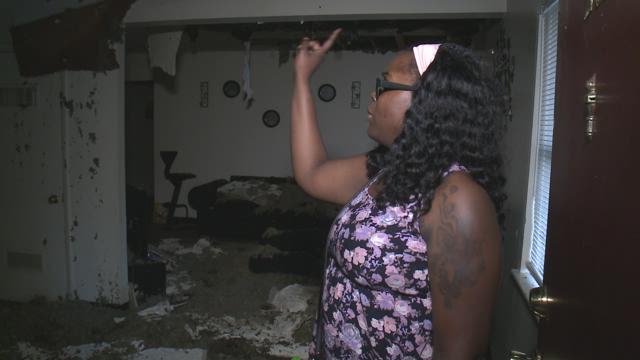 More than a dozen families are without a place to call home Thursday night after a ceiling collapse that left major damage inside their apartments.

"I'm speechless. I'm loss for words because this is what we call home," resident Sheena Saffo said. "This is where we lay our heads at every night and to see everything that I worked for just gone, damaged. It's heartbreaking."

Saffo has lived in a three bedroom apartment at the Bedford Pines Apartments for 4 years. Around 11 p.m. Wednesday, she woke up and realized it was not only raining outside, but water was starting to leak into her apartment in multiple areas.

"Instantly went in son's room and he was laying on his bed and water was flooding on him. It was puddle of water. I got him up and we came to the front and my neighbor called me."

Saffo said her neighbor's apartment was also leaking water. Soon she saw her ceiling start to peel back.

"As soon as everybody got out of the apartment, it just fell," she said.

The families affected - adults and children alike - ran out to their apartment buildings in the middle of the night with nothing but the clothes on their backs. Sheena and her family barely escaped. Fortunately, none of them were injured. But now there's a lot of damage that someone has to answer for.

This is not the first time her apartment has leaked. Saffo said contractors had been working on the roof before it collapsed and she was never informed by her leasing officer of the construction.

Management at Bedford Pines had hired Roof Depot to replace the roof after residents complained of leaks.

"This week they came out yesterday," Saffo said. "I felt like it was a hazard because we weren't informed of any letter stating that they would be here to do this and they were doing it on top of our heads while we were here."

The vice president of the company, Ron Heath said that their sub-contractor I & C Group Construction started work on the roof Tuesday.

"When you do roofs, re-roofs typically typically you try to protect the roof as best you can," Heath said. "In this case, they tarped the roof to make sure it wasn't going to have water intrusion. A storm came through and blew the tarp over and allowed water to infiltrate the interior."

Heath said the building was already riddled with major roof issues when they got on the job. And storms just added to the problems.

"The decking was rotten, which indicates there's been water intrusion," he said. "We've been replacing some of the rotten wood."

To add to the problems, both the contractor and the city of Atlanta confirm to 11Alive that the sub-contractor never actually applied for a permit to do the job. And neither the complex and the apartment management company was aware when 11Alive told them.

"I'm very sorry that this happens and we're going to do our best to make sure we get this right," one official said.

They said nothing they would have done could have changed what happened because it was the roof work in progress which led to the collapse - not the fact that the decking was already rotten.

Saffo has four children. Her son's seventh birthday is Thursday. Just thinking of the damage and what could have happened brought her to tears.

"It's heartbreaking that my son had to come into his birthday with no home," Saffo said.

The American Red Cross has provided emergency assistance to residents to help pay for things like a place to stay, food, clothes and other needs. Roof Depot is now working to get residents a place to stay until they can move back into their apartments.

Investigators went out Thursday to check the scene and shut down the roof work since the contractors had no permit. Heath said the company is working to get a permit so they can have the job finished and get residents back in their homes adding that he wants to make it right.

Now, 11Alive is waiting to see if they condemn the entire building and if other buildings in the complex will be inspected.