ATLANTA -- Operation Border Guardian, the government's latest enforcement of illegal immigration, is having a significant impact on metro Atlanta. 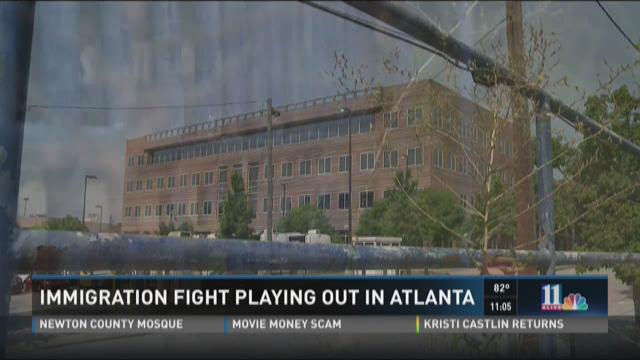 ATLANTA -- Operation Border Guardian, the government’s latest enforcement of illegal immigration, is having a significant impact on metro Atlanta.

There have been more arrests out of the Atlanta field office, which also covers parts of the Carolina’s, than any other in the United States.

As part of Operation Border Guardian, 336 undocumented immigrants were arrested in the U.S. earlier this year. Two thirds were in Atlanta’s district.

Some people believe that’s exactly what the government should be doing, and while there is a legal and law enforcement side to this issue, it is affecting families.

“I dream and I have faith that my family will be here with me someday,” said one Atlanta-area mother, who did not want to identify herself but spoke to 11Alive News. She said that dream of having her family together was finally within reach.

She lived and worked in the United States while her family struggled in El Salvador. Her goal was to provide a better life for them.

“We used to have only one meal a day and I didn’t want that for my kids,” she said.

Two years ago, the woman’s son Jose managed to escape the poverty and violence of their home country. He made it to his mother in metro Atlanta, as a minor.

His 18th birthday, though, sealed his fate.

“They were running upstairs, so I went in my room, and started crying,” Jose’s sister said. She, who also wants to her hide her identity, was there on January 27. It's the day U.S. Immigration and Customs Enforcement arrested Jose on his way to school.

“I’ve seen what immigration can do.”

Two months later, Jose was on a plane back to El Salvador.

“He can’t go out because he’s scared of the gangs in that country,” his mother said.

Turns out, Jose was a prime target for Operation Border Guardian, a federal government enforcement aimed at recent 18-year-old immigrants. The enforcement seeks those who arrived illegally from Central America as children after Jan. 1, 2014 and have no claim or appeal of asylum.

There have been several series of arrests in metro Atlanta since January.

Cho documented, in great detail, what she called a weekend of arrests she claimed specifically targeted women on Jan. 2 and 3 in metro Atlanta.

“What we’ve seen in a systematic denial of due process rights to people who are targets of raids,” Cho told 11Alive's Chris Hopper.

Cho is pursuing lawsuits against the federal government, and is calling into question tactics used by ICE officers that weekend.

“A lot of the women that were targets of the raids had slam dunk asylum cases that actually had very valid claims of relief,” she said.

Data show undocumented immigrants fleeing violence and persecution have very little chance of receiving asylum protection in Atlanta, even though the rules are federal.

The five Atlanta immigration judges denied asylum 98 percent of the time in 2015 -- that’s the highest of any court in the nation. It's also well above the national average of 52 percent.

In June, several protesters gathered in the streets of Atlanta and demonstrated, alleging that the Atlanta ICE office had become "Ground Zero" for deportations. They said they wanted to hold the "accountable for their aggressive tactics which have criminalized the community."

Back then, Atlanta's ICE responded to the protestors Monday in a release saying that it "conducts civil immigration enforcement in full compliance with federal law and agency policy." Further, it asserts that around 66 percent of the 3,000 individuals deported as recently as March 21 were convicted criminals.

1 / 17
Several people were arrested during a deportation rally on June 27, 2016 after some chained themselves to ladders in an Atlanta intersection.

But Carolina Antonini, who has been an immigration attorney in Atlanta for 20 years, said the flaws in Georgia and Atlanta are systemic.

“These numbers have existed for many years and show the problem is chronic,” she said. “Immigration judges are not applying proper standards, immigration defense attorneys are either not taking sufficient cases, and in the cases that they take maybe they’re not presenting properly.”

But D.A. King, President of the Dustin Inman Society disagreed, saying, “Should any of them be allowed to stay? I say no.”

King is in charge of a Georgia based group demanding enforcement of immigration laws, and he still believes far too many undocumented immigrants are allowed to stay.

“If we deprive illegal aliens of their jobs, their benefits, and their services, we have proven that they will leave,” he told 11Alive.

King believes the problem lies with the agriculture industry and the Georgia legislature, who he claims give people living in the state illegally too many freedoms.

“The "raids" are nearly humorous on the part of the Obama administration to make it look like there is some effort toward enforcement,” King said.

But somehow, Jose’s mother still holds out hope for her kids to be together and that they'll have jobs, despite the odds her family is facing.

An ICE spokesperson from the Atlanta field office stands by the organizations enforcement efforts this year, but will not talk about specific tactics used.

Overall, deportations nationwide were down significantly in 2015 based on ICE figures.

ICE said it focuses its enforcement on people who pose a threat to national security, public safety, and border security.

In the second part of our report, 11Alive News features the story of a young woman from Central America who was arrested as part of this operation. She is out of jail, but the question now is will she get to stay, and should she? See the story here.