'It's working' | Baby A.J. out of surgery after surprise kidney transplant

"When the situation was very bleak, it was their faith, it was the support of the community that pulled them through this." 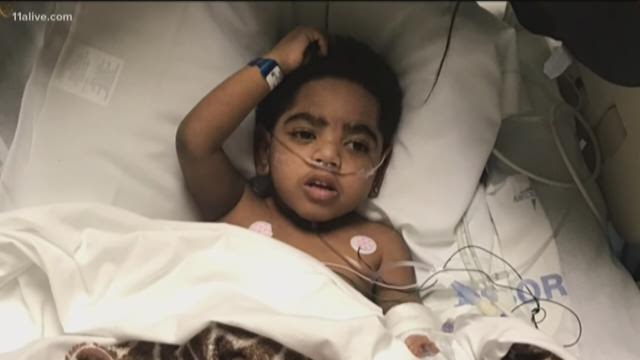 The little boy born without kidneys whose story captured the attention of the nation is now out of surgery and adjusting to life with his new organ.

A.J. Burgess, 3, underwent a kidney transplant Wednesday morning after his family got the call that a donor organ was available. He started being prepped for surgery around 7:30 a.m. and before noon, he was in recovery.

He could be moved into a room in ICU by the end of the evening.

A lawyer for A.J.'s family said they are both overwhelmed and thankful for everyone from the surgeons and hospital staff to the community that supported him.

"His surgeons came out, told us of this great news. Hugged the family, it was an emotion moment to see something that we all hoped and prayed for all along to see it actually come to fruition. It was really an overwhelming moment," lawyer for the family Mawuli Davis said.

"They want to thank everyone that supported him, the community that rallied around him."

A.J. received one kidney from a donor who had died. While the family won't know whose kidney A.J. has until a year has passed, they are thankful for this person's life.

"All they can say is thank you. Thank the family of the deceased person, thank God," Davis said.
He called it a "Thanksgiving miracle."

"They look forward to celebrating thanksgiving here in the hospital with him and his new kidney," Davis said.

Davis said so far, the A.J. is showing signs of progress.

"The kidney is producing urine, so it's working....the family just had an unbelievable feeling today of gratitude. It's just been an overwhelming 24 hours for them."

The family is also encouraging people who were passionate about A.J.'s cause to become donors themselves.

"Sign up to be donors so that another family can be blessed with the gift of life the way their son has been blessed on today," Davis said.

CATCH UP ON THIS STORY

Baby A.J. was set to get a transplant from his father, a perfect match. But when Anthony Dickerson went to jail in September for violating his probation, it put his son's transplant on hold. Since then, family had been fighting to get A.J. the life-saving transplant.

11Alive's Neima Abdulahi brought this family's story to the nation and thousands were outraged at Emory Hospital for deciding to delay the transplant and re-evaluate next year.

When reached, Emory couldn't talk about specifics around A.J.'s care but said, "Guidelines for organ transplantation are designed to maximize the chance of success for organ recipients and minimize the risk for living donors."

There are two types of organ donors, those who are living and those who are dead. For more information on signing up to be a donor, click here.