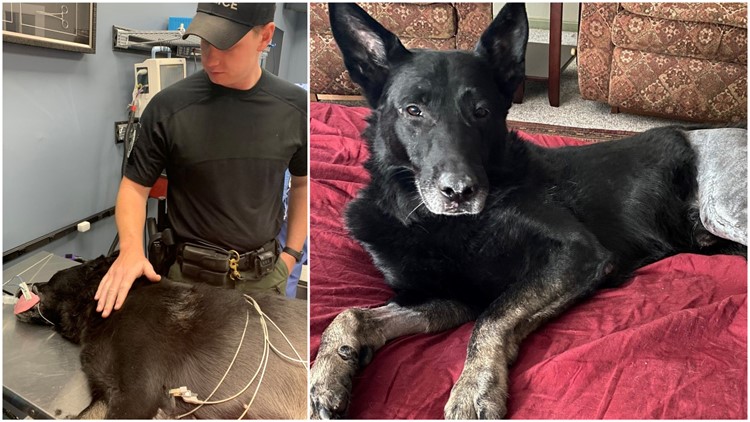 KENNESAW, Ga. — A Kennesaw K-9 officer is recovering after authorities say he underwent emergency surgery for a knee injury.

According to the Kennesaw Police Department, Turbo was assisting the Cobb County Police department with tracking two persons of interest in cases of entering autos when he injured his left rear knee.

Turbo underwent surgery early Tuesday morning to repair his knee and has since been brought home to recover "in Turbo style."

In addition to being a K-9 for the department, Turbo has become a community ambassador over the years with "Turbo Tuesday" posts and other announcements featuring him Facebook dating back to at least 2015.

This particular Tuesday post was described as "sad and good news" for the K-9 - sad that he got injured but good that he appears to be on the road to a full recovery.

The department ended its note with a warning to criminals city and county-wide as the police K-9 works to get back on his feet.

"K9 Turbo, an Officer that has been rebuilt, because of the Technology, Kennesaw now has the first bionic dog (not really bionic)," the post said hearkening back to the 6 Million Dollar Man. "K9 Turbo is that dog, better than he was before......better, stronger, faster!!!"

In response, several people have already wished Turbo a speedy recovery on Facebook.