He has been charged with the homicide by vehicle in the second degree and failure to maintain lane. 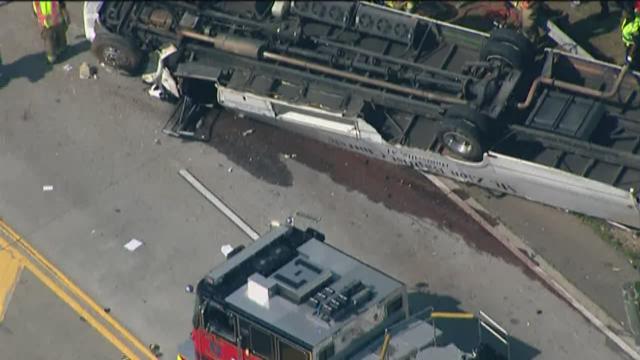 On Thursday, a bus headed from Mount Zion Baptist Church in Huntsville, Ala., was on its way to Hartsfield-Jackson International Airport when it crashed along Camp Creek Parkway near Merk Road.

Investigators said preliminary information reveals the bus driver attempted to change lanes when it collided with a Chrysler already in that lane. That's when the driver, Jerry Sims, tried to overcorrect and lost control. The bus entered the median, rolled over and slid into a Mercedes traveling in the opposite direction.

According to Fulton County Police, the driver is still in the hospital and has not been interviewed yet. He has been charged with the Homicide by Vehicle in the Second Degree and Failure to Maintain Lane. The NTSB is still investigating the crash.

Jason Swindle, Sims' lawyer, released a statement, saying, "My client, Jerry Sims, has been charged with Failure to Maintain Lane and Homicide by Vehicle - 2nd Degree. These charges are misdemeanor traffic offenses because neither drugs nor alcohol were involved in the accident. Jerry, who is still recovering in the hospital, has received nothing but love and support from the families affected by the accident and the fellowship of the entire Christian community."

WHAT WE KNOW ABOUT THE VICTIMS

The bus was carrying a crew of high school students and chaperones from the church who were on their way to a mission trip in Botswana, Africa. The crash killed one of those teenage passengers, Sarah Harmening. About 40 people were injured in the crash and had to be transported to the hospital.

After the crash, Harmoning's parents shared her last journal entry that they believe showed her love for Jesus Christ.

Atlanta Medical Center's South campus in East Point took in 15 patients. All of them were expected to be treated and released.

Hospital officials said it was an emotional day for them as families kept pouring in wanting to know the status of their loved ones.