The "America's Got Talent" alumna and Johns Creek native shared her story with lawmakers to help get more Congressional funding for the fight against kidney disease. 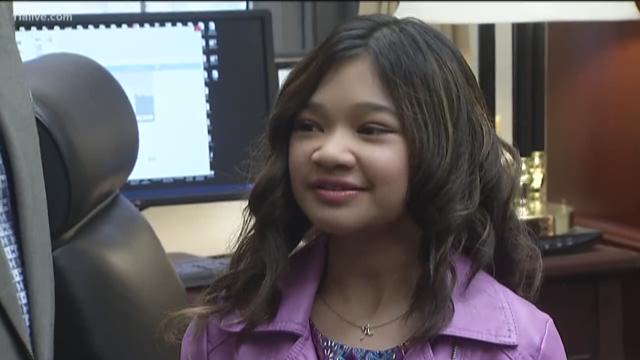 WASHINGTON — Angelica Hale is stepping out on a national stage of a different kind to help others battling kidney disease have a chance for survival.

You might remember the Johns Creek native from NBC's talent competition "America's Got Talent." The 10-year-old was runner up on the show, and now she's putting her new-found stardom to use for a good cause.

On Tuesday, Angelica was one of about 100 advocates on Capitol Hill in Washington, D.C. who shared her story with lawmakers to help get more Congressional funding for the fight against kidney disease. The summit coincides with National Kidney Month in March.

Hale was just 6 years old when she received a kidney transplant from her mom that saved her life.

She told lawmakers her mom is "her hero" and she understands what it's like to be in that position of waiting to know if you'll get the life-saving treatment. Now, she wants other kids to have the same chance for survival.

"Going through that was very harsh. It was some rough times," she explained. "Being in the hospital for a long time was hard. I thought I wasn't going to make it... I know it's hard for people to go through that, so that's why I really want to help."