A Facebook posting calling for people to desecrate Confederate graves at the Marietta National Cemetery brought dozens of Southern sympathizers, including members of the Ku Klux Klan, to the cemetery on Saturday. 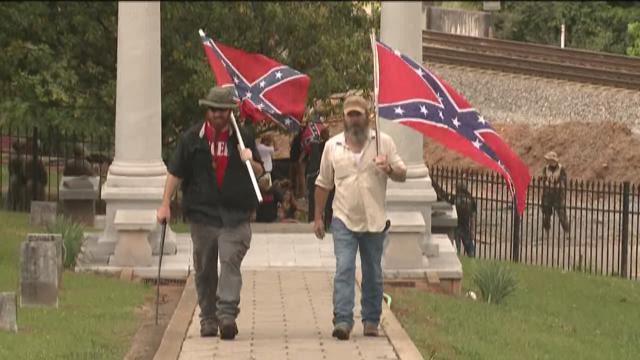 MARIETTA, Ga. – A Facebook post calling for people to desecrate Confederate graves at the Marietta Confederate Cemetery brought dozens of Southern sympathizers, including members of the Ku Klux Klan, to the cemetery on Saturday.

The groups, many of them heavily armed, said they were present to defend the monuments.

"You're not coming up here to desecrate these graves. You can go out and you can spray paint in the middle of the night like cowards. But come up here and face the people that have family in here. Come up here and face us. You're not going to," said Tim Arnold, who came from South Carolina.

Michael Evans is a member of the Georgia's III% Security Force and stressed the group is not a affiliated with the KKK. "We don't care if you are black, white, green or purple, as long as you protect the Constitution of the United States of America, you are welcomed."

The Facebook event featured a cartoon character urinating on the Confederate Flag.

The event was posted by another Facebook group called "Trolling Trumpsters." When 11Alive was present, no protesters from the group appeared to have shown up.