The LSU-bound star was shocked to see the Falcons quarterback on Tuesday. 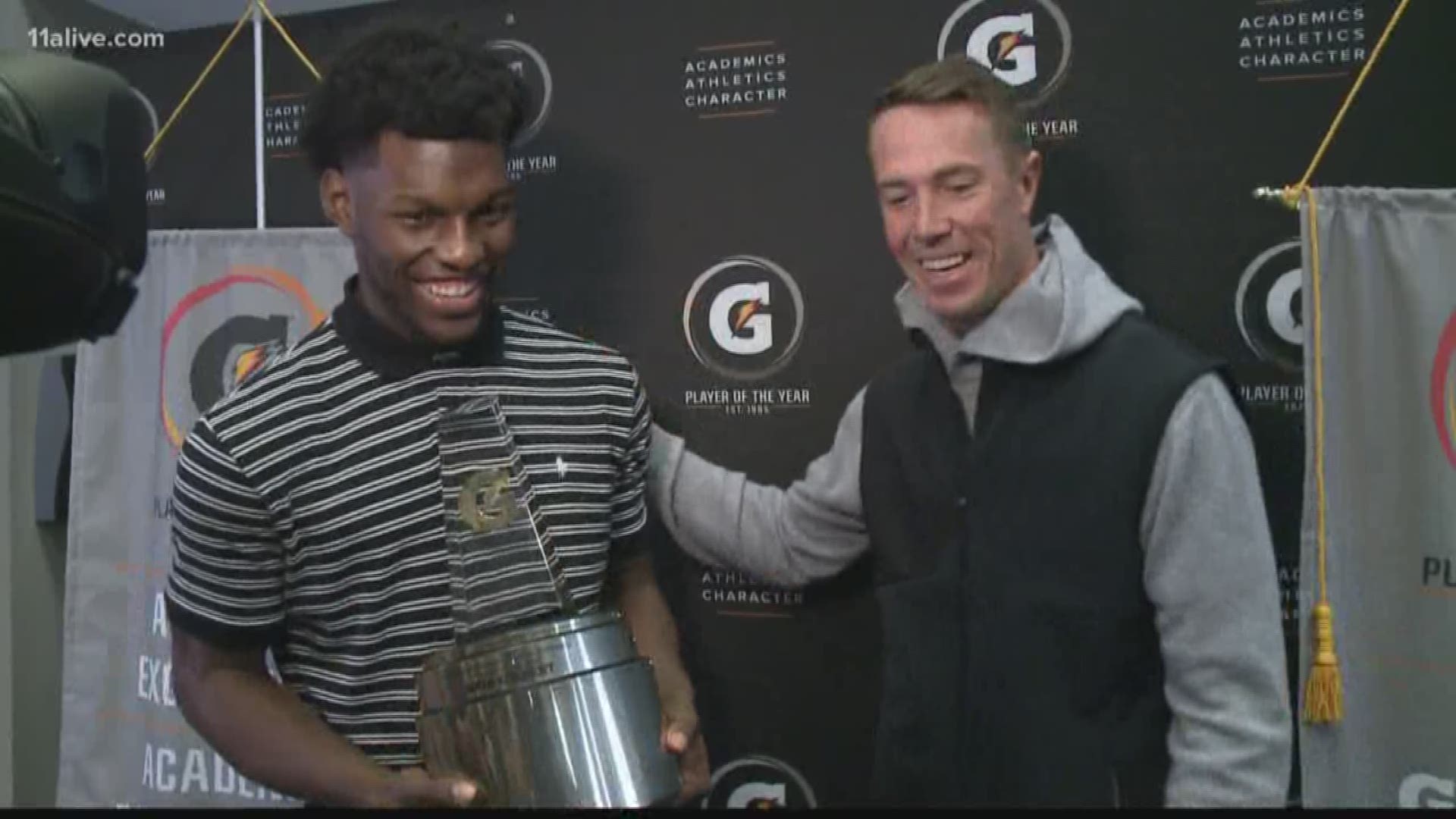 Gilbert, the Marietta High School star who's bound for LSU next year, was surprised with the Gatorade National Football Player of the Year Award at the football team's weight room.

His teammates, coaches and family were all around for the occasion - and so was Falcons quarterback Matt Ryan.

"He doesn't get really, really animated about things, so I think the smile on his face kind of said it all," Morgan said. "He was shocked."

Gilbert - who also won the Georgia state Gatorade Player of the Year award earlier this month - said he was "speechless."

"It feels great, never imagined anything like this, just blessed," he said. "The hard work that I put in with my teammates, just to get ready for this season and make myself better as a player, I mean, just to see all that come together now and win an award like this is unreal."

"When I first walked in, I was like why is Matt Ryan shaking my hand," he added, with a laugh. (Watch the full surprise here.)

Ryan, two days removed from engineering the shock of the season with a last-second win over the San Francisco 49ers, said it was his honor to be there.

"It was a great honor for me to come and to be able to celebrate a special day for Arik and his family," the Falcons quarterback said. "You know, just to be a small part of it is nice. To see the kind of the joy of the entire school and how proud they are of him and what he's accomplished both on and off the field was fun to be a part of."

GIlbert helped lead Marietta to their first state championship in more than half a century on Saturday, with more than 100 yards receiving in the game. The Blue Devils went 13-2 this season, in part, thanks to Gilbert's receiving prowess - he totaled more than 1,700 yards and 14 touchdowns in 15 games.

He was a five-star recruit for LSU, the top tight end prospect in the country by both ESPN and Rivals, and No. 11 overall by Rivals.

The director of the Sports Illustrated All-American selections, John Garcia Jr., called him "the most complete prep tight end I've scouted" in a release.

"His physical profile alone would warrant offers, but it's his polish that makes him a can't-miss prospect. He's already a great route runner with very good ball skills, which pairs almost unfairly with his athletic ability," Garcia Jr. said. "He's big, fast, physical, and competitive on top of it. He's probably the most dominant offensive weapon in the country, and he's doing it against elite competition in the Atlanta area, where he led his team to its first state title since 1967."

Gilbert will now be up for the overall Gatorade Male High School Athlete of the Year award at next year's ESPY Awards.

"I wanna thank you all for coming out. Thank my teammates and my coaches because without them this wouldn't be possible," he said as he was surprised with the award. "I'm speechless."

Could Dan Quinn keep his job after all? | What they're saying after a wild Falcons win