She reported all of this to Amazon and is getting ready to file a police report. 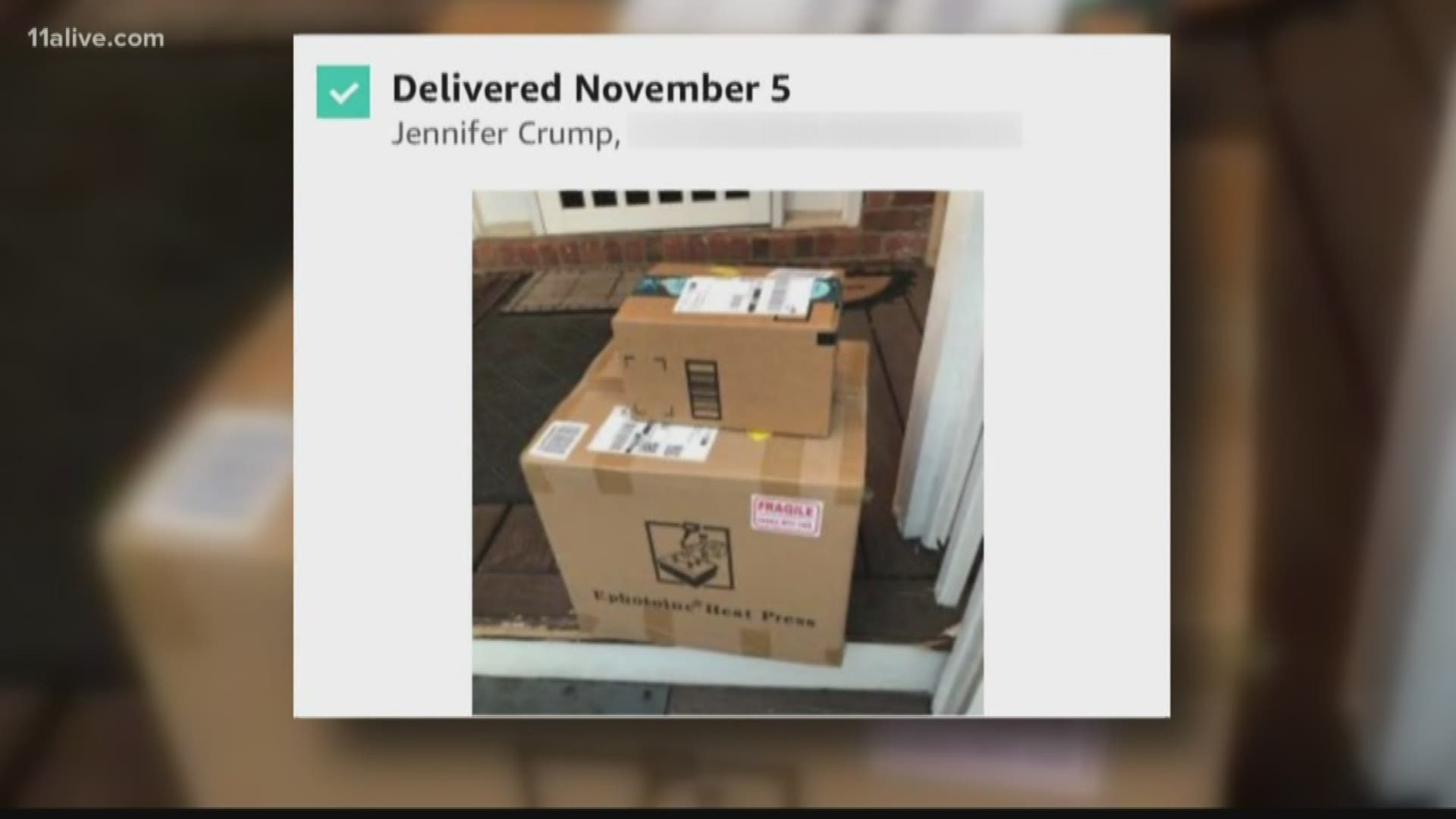 MCDONOUGH, Ga. — We all know, we all have to watch out for porch pirates stealing packages from our doorsteps.

But what happens when the person who delivers the package - takes it back?

That’s what a woman in McDonough wants to know, and she has what she believes is evidence on video.

Jennifer Crump said she was expecting her package to arrive Tuesday evening, Nov. 5, along with a second item she ordered. She checked her Amazon account.

“It shows—delivered November fifth with the packages right there on my doorstep,” she said.

Sure enough, there’s the photo posted to her Amazon account showing her packages on her front porch. Both packages - delivered. But why was one of them missing from the porch later?

“I don’t care if your image shows that it was delivered. It was not delivered,” Crump said.

So, was Jennifer Crump the victim of a porch pirate? She checked her outdoor security camera video - and her jaw dropped.

The video shows the Amazon driver, an independent contractor using her own car, walk to Crump’s front porch with the packages, walk out of camera-range for a moment, when she takes the photo of the packages on Crump’s front porch, and then - the driver carries the bigger box away and leaves. 11Alive is blurring the driver's face in the video (Crump added the on-screen graphics) because the driver has not been charged with a crime.

Crump reported all of this to Amazon and is getting ready to file a police report. But she is not the only customer who has complained.

This past December, for example, a customer posted on the Amazon Services Sellers Forums: “Amazon delivery person stole our package, have it on video.”

And six months ago, another customer posted video on Reddit, showing an Amazon driver seemingly place a package inside the man's front fence, and even taking a photo of it as if he’d delivered it - but then the video shows him taking the package back to his car and disappearing with it.

Last month, police in St. Petersburg, Florida arrested a man, who’d been an Amazon driver for just seven months, charging him with stealing more than $6,000 worth of merchandise that he was supposed to deliver.

Crump said it’s a failing that is simple to correct: “Screen their workers,” she said. “Have a better system that can verify that these packages are being delivered.”

And she said the company should not tell customers that their packages were delivered when they weren’t.

A company spokesman told 11Alive that Amazon is investigating Crump’s complaint to find out why the driver did this, and has been in touch with Crump “to make this right.”

RELATED: VERIFY: Why do we need specific porch pirate laws?

As of Thursday night, two days after she was supposed to receive her package, Crump had still not received it, ending a frustrating week for her -  not wanting to jump to conclusions but frustrated with the non-delivery, and hoping to find out that the person who was supposed to be on her side fighting porch pirates might have had a legitimate reason for taking her package.