According to his family, the 61-year-old was found by a neighbor in a wooded area not far from his home. 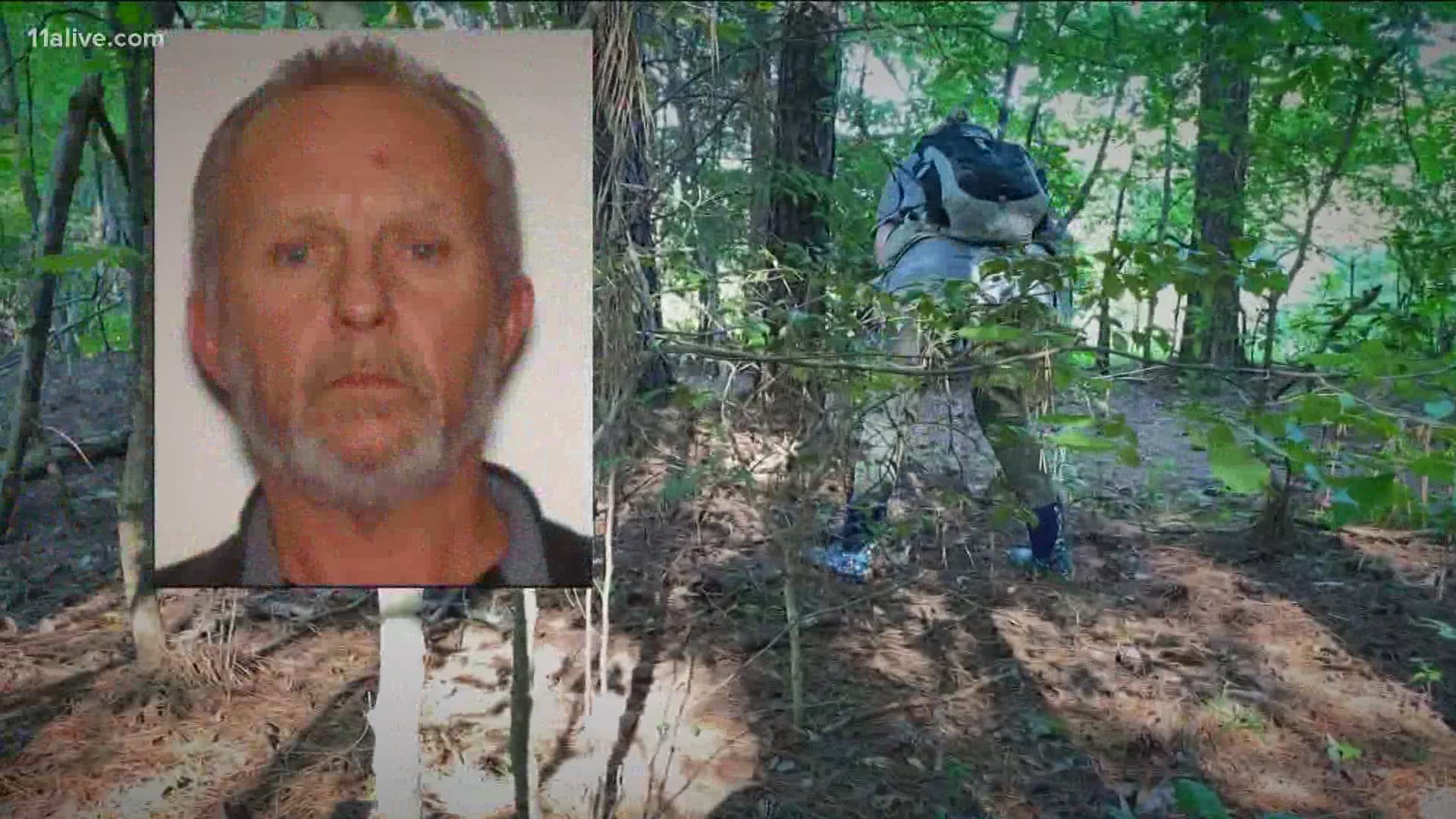 HENRY COUNTY, Ga. — UPDATE: The man who went missing earlier this week has been found alive. According to his family, the 61-year-old was found by a neighbor in a wooded area not far from his home.

They told 11Alive he was tangled in barbwire in the woods and couldn't get himself free. First responders came to the scene to examine him.

A family, desperate to find their father, are scouring the woods every day near his home in Henry County.

Rory Harris, 61, disappeared Sunday. He has liver cancer, is physically frail, and is often disoriented. His family said he is likely in the last year of his life.

Harris walked out of his home at about 12:30 p.m., without his medications, and his family has been searching every day while volunteers search at night with bloodhounds.

They know they are fighting time.

“We’ve searched everywhere through these woods,” said his daughter-in-law, Jordan Harris, Wednesday evening. “And there’s just no sign of him anywhere.”

Rory Harris and his wife live on Jackson Lake Road in Henry County, east of McDonough.

“We saw him Saturday,” Jordan said, “and it was hard for him to even get out of the chair, so we don’t think he could have gone far.”

Jordan said that Sunday morning, Rory drank his cup of coffee, ate breakfast—and then just after Noon, walked out of the house.

And soon his family realized he didn’t come back.

“He put his shoes on and he said he wanted to go home,” Jordan said, “But he was home.”

Jordan and the rest of the family can only wonder if Rory was thinking of Tampa, Florida, where he was born, or possibly the area around Navarre, Florida, in the panhandle, where he lived for many years.

Rory is a retired, interstate truck driver. They want to find out if, perhaps, he made his way to a truck stop along I-75 in Henry County to try to get a ride with a truck driver somewhere.

Relatives along the Gulf Coast of Florida have posted missing persons flyers with his photo and a phone number, and Jordan has placed flyers on businesses throughout the area of Henry County near his home.

Jordan has been organizing the search parties in Henry County, using her Facebook page to connect with volunteers.

One of the volunteers is posting aerial drone video, in case someone spots something that others missed.

RELATED: Family searching for terminally ill man who has been missing for 3 days

The forests along Jackson Lake Road are vast and dense.

“We’re going in deep in these woods,” Jordan said, “probably two miles into the woods, and then just walking until we find a road.”

They said they noticed a rapid decline in his health at the beginning of the year.

The man they know, the man they remember, was funny, engaging, “goofy,” and devoted to his family. He loved the roar of NASCAR races.

He was wearing a teal T-shirt with the words “LMR Trucking.” He had on black sweat pants, and black and white Nike shoes. He is 6-1, 195 pounds, has blue eyes and gray hair.

“If he is somewhere,” Jordan said, her eyes filling with tears, they want to know. “We just need closure. And we just honestly don’t know where to look anymore. But we’re trying all that we can.”

Henry County police have searched with helicopters and heat-sensors and sonars and K-9s.