'Until I get evidence, in my mind, she's alive' | Tiffany Foster's sister speaks 4 months after her disappearance

The mom of three went missing on March 1. 'Every time we find a new piece of information, that gets our hopes up but then it’s like, that’s not leading to her.' 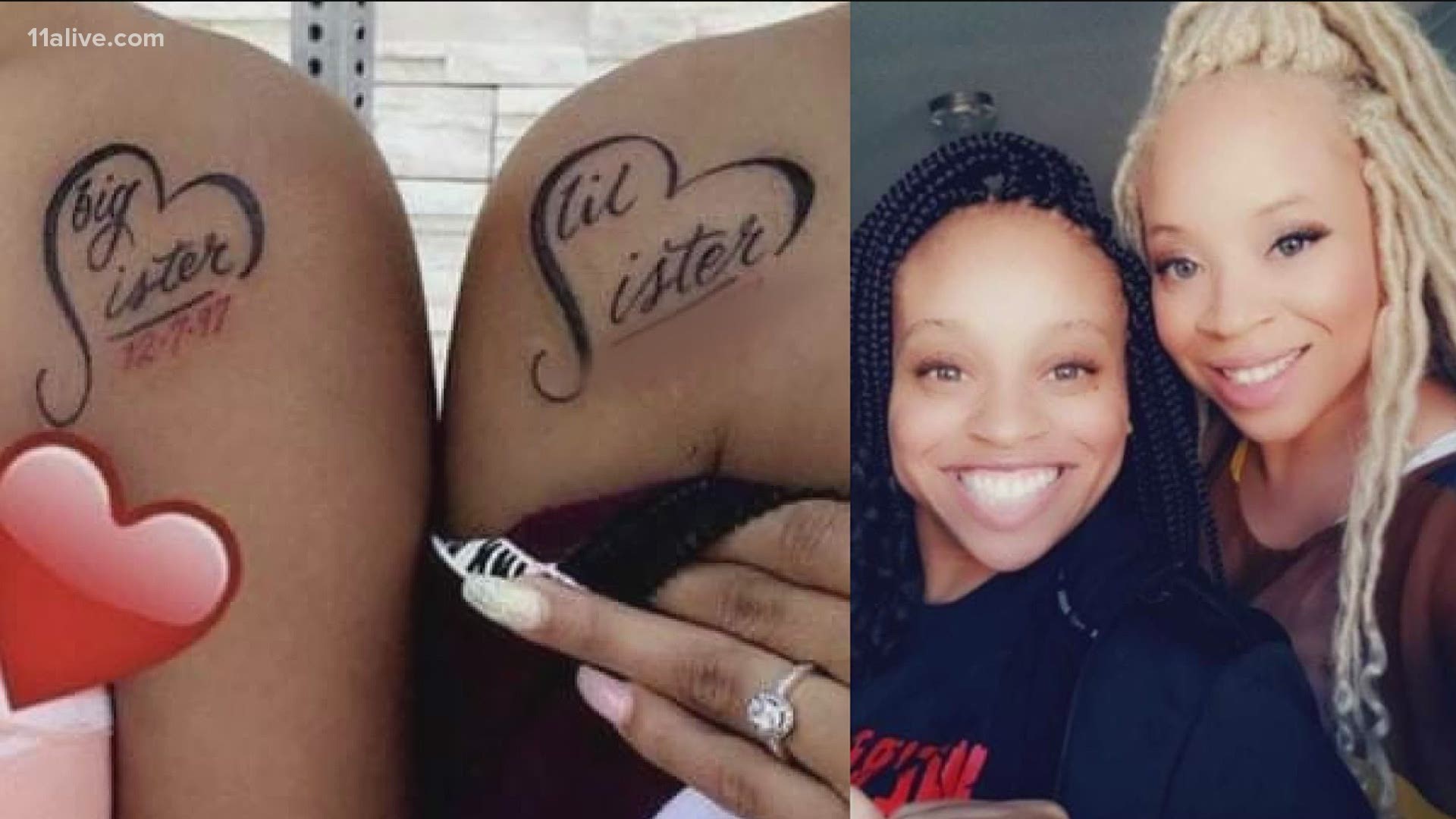 NEWNAN, Ga. — Kimberly Bryan's older sister, Tiffany Foster, was her first friend. In a family of four sisters, the two of them were closest in age and acted as each other's shadow. Their mom even dressed them alike.

So, it's no surprise the two have matching tattoos to remind them of how much they mean to each other. Even if it did take a hot minute for Bryan to convince Foster.

"We got them in 2019. I finally talked her into getting one. And I was like, 'alright we’re going to get matching tattoos' and she said 'alright' and I’m like, 'are you serious?' So I called the guy and paid for them and told her, 'they’re paid for, you gotta go through with it.'"

Foster went through with it. On Foster's arm, the words 'big sister.' can be seen in cursive text. Bryan's of course, reads 'lil' sister.'

The words on each sister's arms are inside hearts, to remind them they'll always have a place in each other's.

Foster and Bryan talked on a weekly basis. But Bryan hasn't heard from her sister, in four months.

Foster, also known as Tiffany Starks, was reported missing on March 1, after leaving the home she shared with her fiancé, Reginald Robertson, to run an errand.

She's hasn't been seen since. Her three children, a 17-year-old son, a 15-year-old daughter, and an 11-year-old son, have been staying with different family members.

Bryan said they're all understandably, having a difficult time.

"I was laying in my bed and she just ran into my room and broke down crying," said Bryan, who is taking care of Foster's daughter. "I just felt so helpless, like what can I say?"

Bryan told 11Alive, Foster texted her daughter, asking if she needed anything from the store. Her daughter didn't see the message until later.

It was Foster's daughter who alerted her grandmother that Foster didn't return home that night. The family contacted police.

On March 8, Foster's car, a gray 2020 Nissan Altima, was discovered in College Park. Her debit card, purse, keys to her home were found inside.

A few weeks later, on March 23, Bryan, other family and Robertson, Foster's fiancé, appeared at a news conference, begging for information about the mom's disappearance. Robertson said he hadn't talked to Foster since she left home on March 1st.

Bryan said something felt off.

“The vibe, the energy, like something in me just said, 'he knows more than what he’s doing,'" Bryan remembered.

Robertson was later arrested and charged with theft after investigators said he moved Foster's car from Newnan to College Park days after she went missing.

“You just did an interview about how you missed her and want her to come home and a few days later, you’re the one who moved the car and it’s like oh, you know something," Bryan said.

Coweta County Sheriff Lenn Wood said at the time, the charges were not directly related to Foster’s disappearance.

Wood further stated Robertson was not a suspect in her disappearance at the time. Investigators have not said why Robertson would have moved the car.

Bryan said Robertson isn't cooperating with police and believes wherever the car was originally located could have ties to her disappearance.

“And I feel like that’s why it was moved," Bryan said.

Would Foster have just left her life on her own accord? Bryan doesn't believe so, since she was a few months away from graduating from Georgia Military College where she studied criminal justice. Her goal, work in law enforcement. Bryan said she also would never willingly let go of her children.

“She wouldn’t leave them like that. Everything was going good for her. You don’t just walk away from something like that," she said.

Bryan said her sister was strong, smart, always laughing, and the person anyone could go to with their problems. Foster is the exact person Bryan needs right now.

“Right, she would be the one I would talk to. So, I’m sorry," Bryan said, taking a break to wipe tears away. "It’s just so hurtful because yeah I need her to talk, to hear and be like 'this is what’s going on and XYZ.' I miss her walking through here, asking to borrow clothes or 'Kim can you do my makeup or my hair?' Like, I miss that.”

After a few sniffles, Bryan continued, “It breaks my heart to think, to even think I may not see her again."

Bryan said she can't help but think about Foster's children, who have no way of knowing what happened to their mom.

“I can call my mom. They can’t and I'm thinking of it as, what if I wasn’t able to call my mom? Or see my mom. It hurts," Bryan said as tears fell once again. "I just feel for them.”

Bryan said she's not giving up on her sister returning home. The family continues to pray and work with detectives to find more evidence, hoping it inches them closer to finding Foster.

“I think it’s the not knowing that’s driving us crazy because it leads your mind to think of so many things on the spectrum from the worst case scenario to OK, she’s going to walk through the door," she said.

Bryan said she tries to block out negative thoughts about her sister.

“Until I get that evidence, in my mind, she’s alive," she said.

Almost every great memory Bryan has, her sister was a part of it. She wants to make more memories with her sister. She wants her heart, to be whole again.

"I know when I see her, I’m going to break down crying and after that it’s like, what condition am I going to see her in?” Bryan questioned. "It's a lot."

A $10,000 reward is being offered for information about Foster.

Investigators confirm Robertson has not been charged in connection to Foster’s disappearance and are still treating the case as an active missing person.

Foster is about 5-foot 2-inches tall and weighs 220 pounds, with a large strawberry red birthmark that stretches from her back down her left arm. Anyone with information on her whereabouts is asked to contact the Coweta County Sheriff’s Office at 770-253-1502.