David Down found himself complaining about Modesto's trash problem, so he took take action and has since bagged more than a literal ton of trash around the area.

Credit: David Down
David Down and RoamLost engaged in a clean up campaign at Knights Ferry. He's picked up 2,000 pounds of garbage so far.
Author: Eric Escalante
Published: 9:28 PM EDT July 9, 2020

MODESTO, Calif. — Since January, David Down has shown that he's not afraid to get his hands dirty as he sweeps out a literal ton of garbage plaguing his city.

To date, he's picked up 2,500 pounds of garbage from Modesto and other areas in Stanislaus County. He wasn't asked to clean the city and no one expects him to do so. Regardless, he's driven to do it because the trash problem he sees around town.

“It’s my standard. If I’m complaining about something, why am I not doing something about it?” said Down.

His solution was a group called RoamLost, a conservation group he made that was dedicated to cleaning up trash at national, state and local parks. He has a special focus of collecting 10,000 pounds of trash from the Modesto area by the year's end.

He has done two campaigns along the San Joaquin River by Highway 132, which saw him bag more than 1,000 pounds of trash.

Along Highway 132, he saw an entire hill covered in trash that was impossible to miss; he found even more trash littered along the river.

"You go down to the river and you just see tons of beer cans, fishing line, spray paint cans, (and) diapers. I’ve found needles, all sorts of broken glass, (and) beer bottles.”

He's taken liberties with his own safety to clean out these areas, climbing into places that he says might have been more appropriate with a rope and harness.

“We put ourselves in some pretty gnarly situations," Down said. "There was a spot where I had to climb down that was pretty dangerous. There was just a bunch of bottles, cans, and trash that were getting ready to get blown into our river. We made the choice to get down there and get it (at the) last minute.” 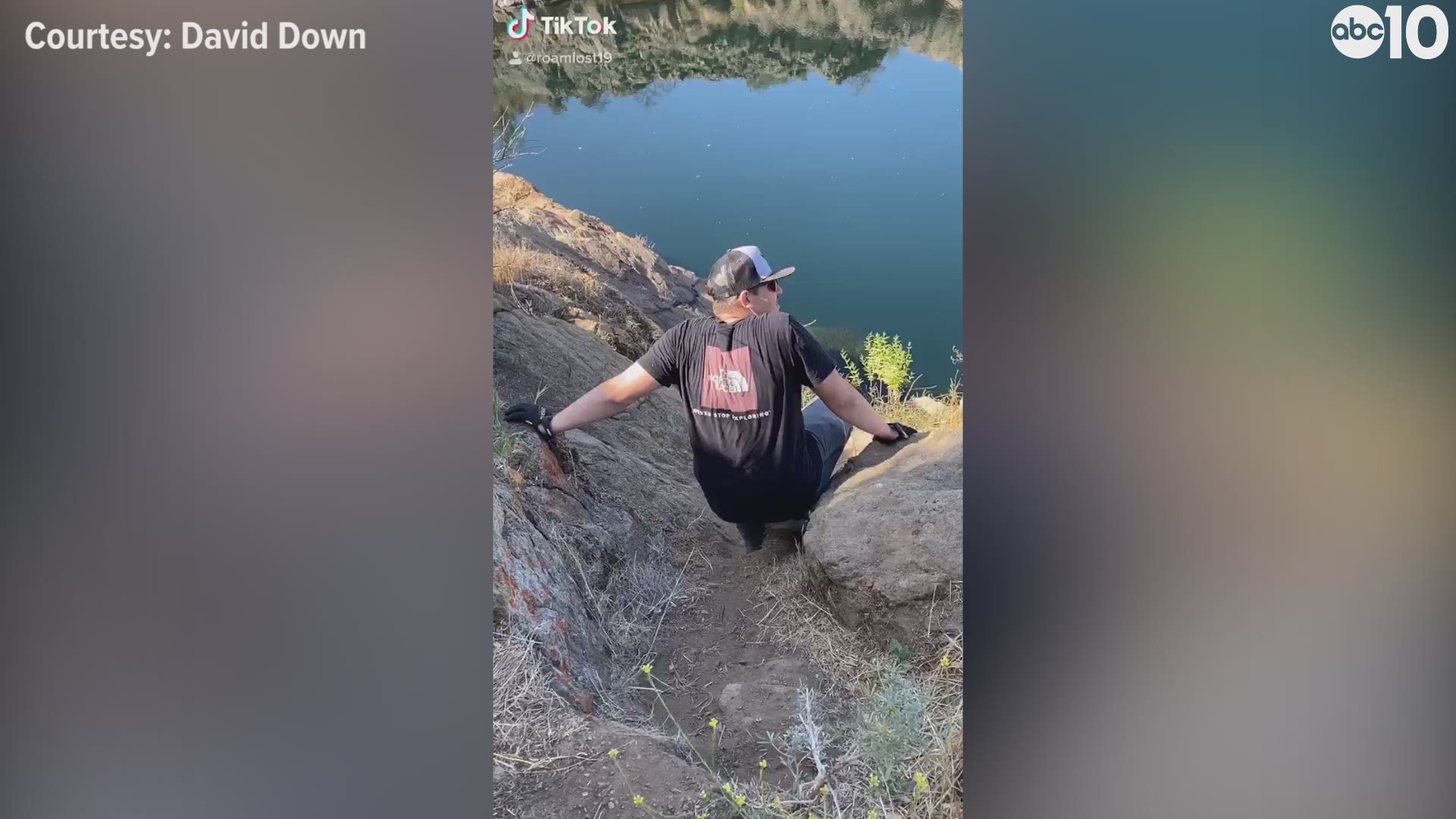 En route to his goal, he rounded up another 1,000 pounds of trash along Pelandale Avenue across from the football field at Big Valley Christian High School.

"There was a really bad problem over there with trash piling up and also a place where people were deciding to stay for a little while," Down said. "It was just completely trashed. We picked just over a 1,000 pounds at that location."

The literal ton of garbage was collected in the course of a few months because the coronavirus pandemic forced him and his team to take a pause. Down said it was a safety matter; he wanted to make sure the cleanups could be done be safely before continuing.

His formal comeback with RoamLost was at Knights Ferry at the end of June. He, alongside 31 others and park services, cleaned out the area and bagged 500 pounds of trash.

“I don’t like looking at [trash] when I’m out there," Down said. "I come out there for the beauty of it not to see people’s trash because they don’t want to pack it out.”

For Down, the cleanups are a passion project. Although his year-end goal is to collect 10,000 pounds of trash, he intends to go well beyond that number by the end of the year and also build awareness about the trash issues in the area.

"It’s a service act on my part," Down said. "I inhabit this earth. I contribute to this earth, and I feel an obligation and responsibility to help with that problem.”

1 / 7
David Down
David Down and RoamLost engaged in a clean up campaign at Knights Ferry. He's picked up 2,000 pounds of garbage so far.

STAY UP TO DATE ON EVERYTHING HAPPENING IN MODESTO BY DOWNLOADING OUR APP:

►Stay in the know! Sign up now for the Daily Blend Newsletter

WATCH ALSO: What is the future of the Stanislaus County Fair? | Q&A with Matt Cranford