CLARKSTON, Ga. — “Hi!” 19-month-old Liviya exclaims into 11Alive’s camera, waving with a big smile and a pacifier half hanging out of her mouth.

Livyia is the picture of health and happiness. She has a loving mother, father, and two older sisters. She’s mesmerized by the tiny microphone clipped onto her mom, Emily Downing’s jacket. Livyia in fact, is good at pulling the microphone off.

For a few minutes, Livyia races around the parking lot of an empty church in Clarkston. She has no idea how much the spot she’s playing in means to her yet. She’s clueless to the fact the parking lot is the same one where her new life started.

In March of 2018, Sarah Koeppen got a phone call on the hotline of her non-profit, The Hope Box. On the other end was a young mom, terrified.

“She had told me she had already had the baby. She researched how to do a safe home birth. She had it in the bathtub,” Koeppen recounted. “No one in the family could know she had the baby because it would have put the baby and her in danger.”

The mother begged Koeppen for help; begged her to meet her in the parking lot and help her get her baby to safety.

The Hope Box is a non-profit, aimed at advocating for mothers in crisis and helping raise awareness about child abandonment and sexual exploitation. Up until that point, they had never helped rescue a baby before. Still, Koeppen met the young mom.

Koeppen remembered, “Where’s the baby? And she said, ‘right here’ and it was laying across her lap.” 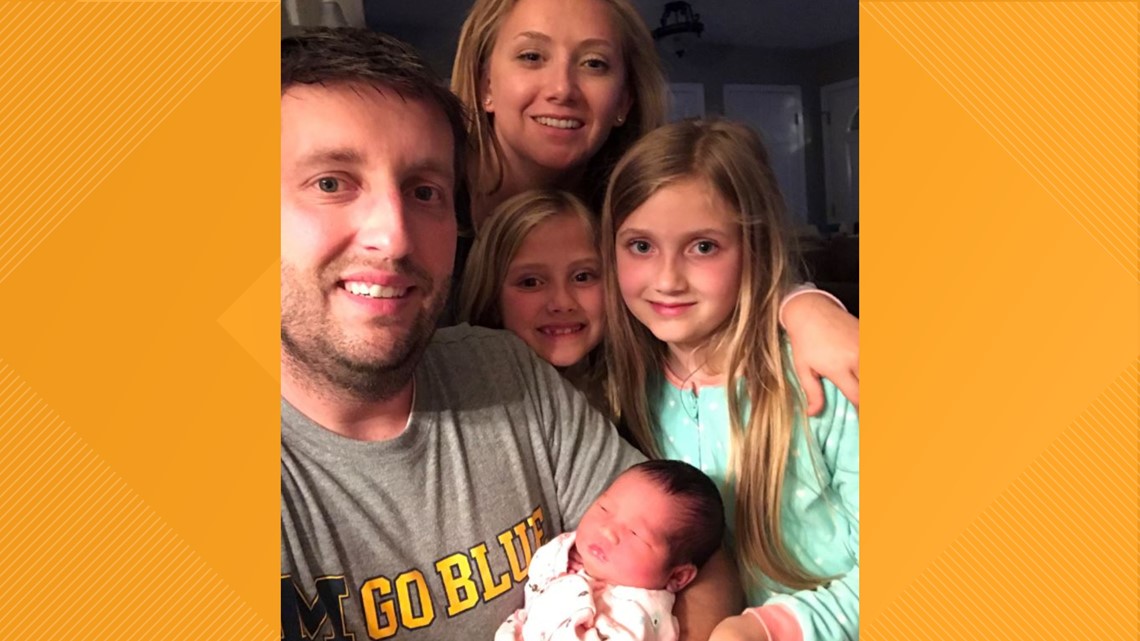 The mom said she was an immigrant. Her father was reportedly the head of a large criminal organization and keeping the baby meant she would either be sent back to her home country or the baby would be sold in the U.S. by her family.

Koeppen explained what options the mom had: invoke the Safe Haven law, by surrendering the less than 24-hour-old baby to a hospital, police station without consequence. Or, she could opt for an adoption.

And that’s where the Downing family came in. Koeppen contacted an adoption attorney who already had a home-study approved family.

“It was a very 'for real' moment. We met her and she immediately handed her baby over to Emily,” recalled Brian Downing. He's the pastor of Oakdale Church of God, married to Emily and the father of two biological girls.

They met with the mother and fell in love with the baby girl, who would be named Livyia. The birth mother, trusting the parents, signed over her rights. Several court dates ensued until Livyia was officially a Downing.

"We went through a really hard time until the final day of adoption, and when the final adoption day came it was a breath of fresh air," Brian said.

The Downing family on the day they adopted baby Livyia.
Provided

The Downings heard stories of mothers, desperate, leaving their children on doorsteps before. But, it wasn’t until they were face-to-face with a scared mother, that they understood how someone could get to the point of leaving their child.

“It opens up your eyes to the fact that there are real people out there with real heartache and real situations that we don’t necessarily know anything about,” said Emily. “The desperation that brings them to that point is really heartbreaking.”

One day, the Downings plan to tell Liyvia her story.

“I believe her story is a powerful one that will equip her to make a difference in other people’s lives as well,” Brian said.

For now, they continue to cherish her as the center of the family - a young girl who had one mother who loved her enough to get her to safety and two more parents to continue to keep her safe forever.

“We love her to pieces,” the Downings said.

The Hope Box is not an adoption agency, but they say they dedicate themselves to helping any mother or father during a crisis. Since Livyia, they’ve helped rescue five other babies in similar situations.

On Oct. 21 at 9 a.m., The Hope Box is having a Birdies for Babies Golf Tournament to raise funds to continue to help children. For more information, visit, thehopebox.org.

Serial killer's lifetime of evil backed up by a prodigious memory