After flyers that were posted around Spelman, Morehouse and Clark Atlanta campuses claiming that the schools "protect rapists", the hashtag #WeKnowWhatYouDid aims to speak out against sexual harassment. 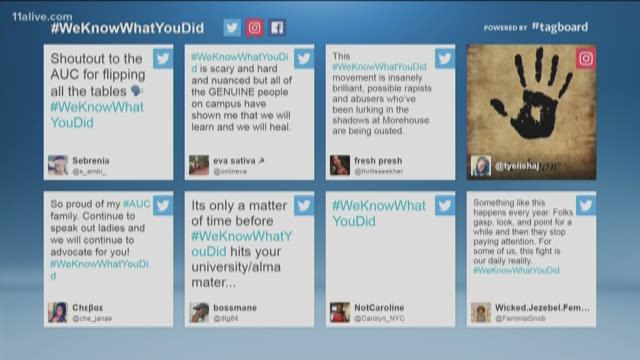 A hashtag on Twitter started trending in Atlanta after students from Clark Atlanta, Morehouse and Spelman started campaigning against sexual harassment on their campuses.

#WeKnowWhatYouDid is alleging that administrators are protecting rapists rather than addressing the underlying problem and defending those who have fallen victim to sexual harassment and sexual assault.

"At Morehouse College, we will investigate all claims of sexual harassment, sexual assault, violence, and discrimination filed with our Title IX Coordinator. Our Sexual Misconduct Policy and Procedures guidelines provide for disciplinary action, including dismissal, if any student or faculty/staff member engages in inappropriate behavior. Morehouse is focused on providing a safe environment for our students, faculty, staff, and visitors. Our priority is to maintain a campus environment that develops young men who are academically excellent, community servants, and leaders in society.

"We have programs in place to educate students about sexual misconduct, including the Not In My House campaign, launched to communicate that violence, discrimination, and disrespect will not be tolerated at Morehouse College. We also have a Healthy Campus Task Force, which is composed of students, staff, and faculty members working in collaboration with the Georgia Independent College Association to raise awareness of campus sexual violence and to coordinate prevention efforts. Student leaders, resident assistants, athletes, and campus organizations participate in training that focuses on their roles in spreading the message that sexual misconduct is prohibited and will be investigated.

"We encourage anyone who has been impacted by sexual harassment or assault on the Morehouse College campus to come forward and file a complaint or to use our anonymous complaint hotline."

Yesterday signs were posted on campus and shared on social media regarding sexual violence in the Atlanta University Center community. I write to remind everyone that Spelman College has a zero-tolerance policy for any type of violence, harassment or unwanted contact. Our hearts go out to any members of our community who have experienced incidents of violence, harassment or unwanted contact.

Any members of our community who have information about acts of sexual violence are encouraged to report them to the Spelman College Public Safety Department at 404-525-6401 and to our Title IX & Compliance Office at 404-270-4005, titleixteam@spelman.edu or online. To report incidents that occur outside of Spelman's campus, we encourage you to use 9-1-1 to be routed to the appropriate authorities. The College is available to assist individuals who report to local law enforcement.

For those who have experienced acts of sexual misconduct, we urge you to contact our Title IX Office for the resources, information and support that the College offers. We understand that there are a number of reasons why survivors/victims are hesitant about filing formal complaints. The resources available are accessible, without filing a formal complaint.

Also, we understand that content related to sexual violence can be a trigger. Students can access support through the offices of Counseling Services, the Dean of Students, Title IX and Religious Life. Faculty and staff can utilize the College's Employee Assistance Program. Below is the contact information for helpful resources.

Our priority is the safety and well-being of Spelman students."

There has been widespread support of the campaign on social media as well as some skepticism.


You sexually harassed me KAJ GUMBS and @Morehouse did NOT hold you accountable for it. They did nothing and @AtlanticCouncil won’t remove you. #WeKnowWhatYouDid

I hope every rapist, every assailant at Morehouse, who hasn’t been disclosed, is somewhere feeling terrified, helpless, fearing exposure, and wondering what they “could’ve done differently...” #WeKnowWhatYouDid

I’m extremely proud of my Spelman sisters launching the #WeKnowWhatYouDid campaign. My dear Morehouse brothers if you don’t stand in solidarity you are complicit in perpetuating rape culture. Period. Prioritize the safety of our sisters over everything else.

#Weknowwhatyoudid So if Spelman and Morehouse are gonna remove the signs, I think that's a perfect reason to keep putting them up. #repeattheprocess until it sinks in

I stand with the victims and survivors of sexual assault at Morehouse and Spelman College. Love to you all. #WeKnowWhatYouDid

I stand in full support of the students at Spelman and Morehouse concerning #WeKnowWhatYouDid . It’s always been a dream of mine for those affected here to get that kind of justice. I abhor assault of any kind.

Let it be known that I don’t go to Spelman, but I have been on the AUC campus, I’ve experienced the environment and just like my school, Georgia State, the voices of the victims often go unheard, or they’re hushed away. Today, a brave individual, that won’t be named to protect their identity, went onto the #spelmancollege campus and posted these flyers around. Some of them had statements such as the one above, and others had the names of the abusers within the community with the saying #weknowwhatyoudid and I applaud this person. Not only because they took the courage to out those that have abused and assaulted but because with such a simple action, they highlighted the importance of taking action regardless of setting. Sexual assault and abuse exist no matter the setting, PWI or HBCU, these issues directly harm the students that deserve to feel and be safe on campus. I applaud this action because it’s too often that after sexual assault happens, the victim is encouraged to be accountable, rather than the abuser. It’s the victims that have to say what they were wearing, it’s the victims that have to uproot their lives to feel and be safe again, it’s the victims that must deal with the repercussions while abusers in most instances are never even named, or prosecuted. I support this action because this is a direct declination of the common narrative. This is saying “no more”. This is breaking silence. This is renewal. This is shifting accountability to the abusers, and saying “we know what you did” and demanding that they change, and held responsible rather than the victims. If you live in the atlanta area, I encourage you to follow this movement, and not only follow it but use it as a stepping stone to change the narrative. Use this to self-reflect on your own actions. Use this to understand that there are more victims than you realize that are feeling pain to this day. Use this to demand change within the spaces you occupy. Unlearn misogyny and patriarchy and demand that everyone around you does as well. It’s only then that we will be able see a world without abuse. If you’re a victim, I’m sending my love to you. We can make it through this. I believe in you.

Against RAPE by all means😤😤. But I️ just hope these people know how this situation is going to hurt THESE schools(spelman and Morehouse) once they get this NATIONAL attention there asking for. #WeKnowWhatYouDid

#WeKnowWhatYouDid the problem is people are associating every Morehouse student with the rape cases and assuming it upon every male here.

Last May, an anonymous Twitter account claiming to detail Morehouse students gang raping a Spelman student caused a wider conversation about rape culture in the AUC.

The @RapedAtSpelman account was published on May 2 and begins with this line: "This is my freshmen year at Spelman and my last year because I decided to leave after what happened to me." It goes on to tell a story about an alleged rape and cover-up by Spelman officials.

This is not the first time the country is hearing about rape culture between Spelman and Morehouse students. BuzzFeed editor Anita Badejo took an in-depth look at the brother/sister relationship between the schools and how that affects sexual violence.

@RapedAtSpelman ends her story with "You can never say Morehouse has their sister's back if they are just going to force her on it."