Many locals are questioning the recent appraisal of their home, but the county’s chief appraiser says the numbers don’t lie. 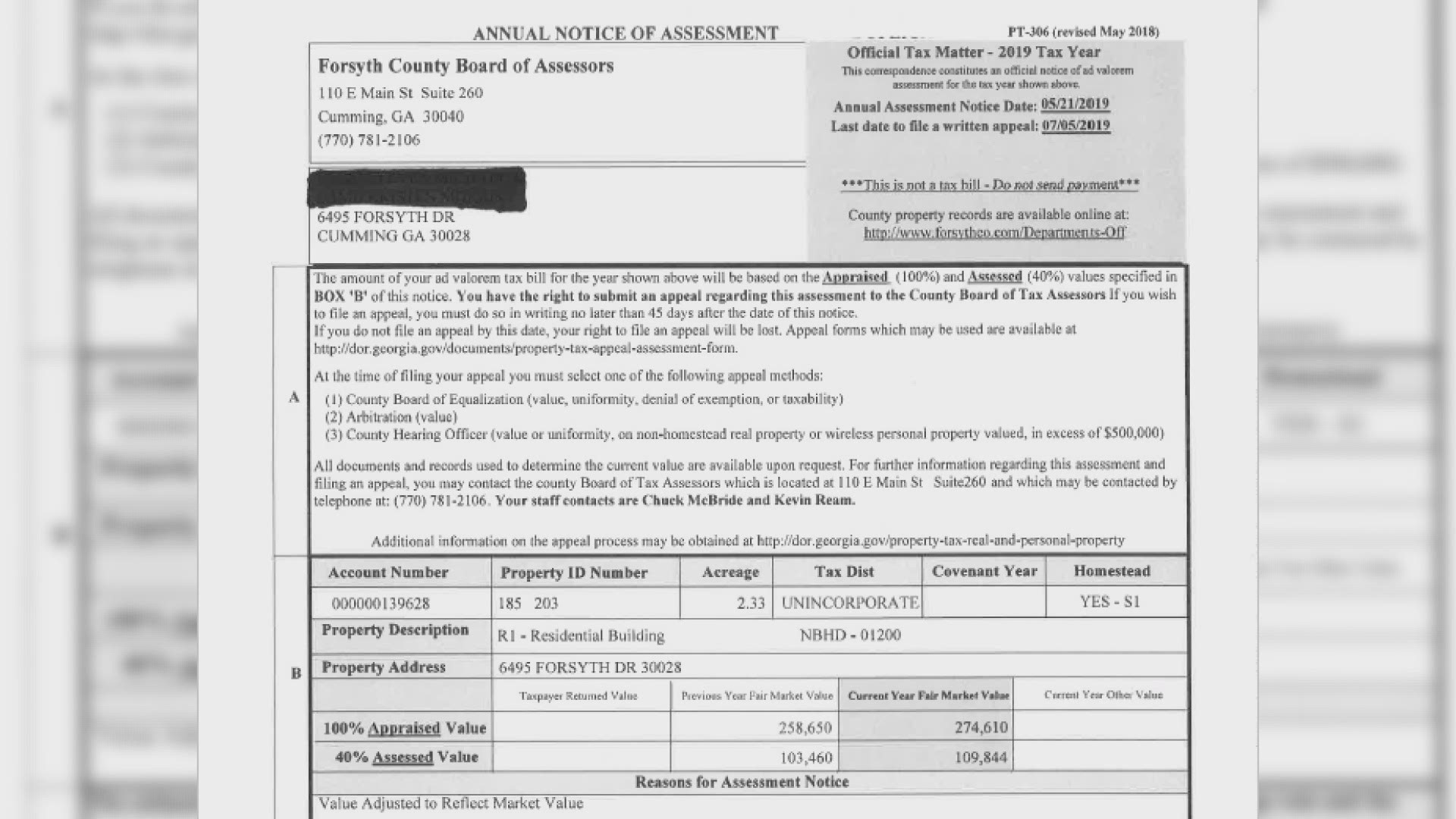 FORSYTH COUNTY, Ga. — Andy Coleman owns a real estate company called Coleman Sold It – Real Estate Made Simple. But things have been far from simple since home assessments were sent out in late May.

“My phone has been ringing off the hook,” Coleman said. “A lot of people are like ‘they’re saying my house is worth so much. No way, no way.’”

Some Forsyth County residents have taken to social media, saying they feel as if the north part of the county was affected more than the south.

“In the North, in my opinion, many homes were undervalued by the tax assessor's office here in the county,” Coleman said. “They're finally catching us up to speed with what market values say. My house was, according to the offices, valued at almost $100,000 under what it’s actually worth in the market, a few years back. And now they've gotten me back to what I think I could sell it for today.”

Mary Kirkpatrick is the chief appraiser for the Forsyth County Board of Tax Accessors, and she says the process for determining the value of a home.

“The three things the board of assessors department is charged with by law is maintaining properties at their fair market value, maintaining it uniformly, and the issue of whether or not they really are taxable,” Kirkpatrick said. “Sometimes in the same area, one subdivision sitting next to the other was low in value while the other was high. The subdivisions that were not coming up to market value were generally one-story homes. We saw this was where our problem was... that the rest of the properties in the county are running at roughly 92 percent to 95 percent market value. These properties were running anywhere from 70 percent to 80 percent market value. So we started doing the analysis and adjusting our tables on the one-story residences, to bring them up equal with the rest of the county. We worked on those tables, corrected those, and put those values into play for 2019.”

She says the confusion could be related to all the recent development in south Forsyth County, an area that likely has less one-story homes.

“I can see how others perceptions would be there, that it may have hit the north end harder than it did the south end,” Kirkpatrick said. “In reality, it hit every one-story home in the county, regardless of where you are – south, north, east, or west. It doesn't matter.”

Coleman says the tax hikes were inevitable because of all the growth, but it’s unfortunate that residential property taxes must be raised as a result.

"That's why there's a big push from some politicians and some chamber people and business people to increase the amount and quality of commercial business in our county, so that can offset some of our residential property taxes,” he said. “The average home in this county is paying somewhere between $2,000 and $3,000, I would think, annually in property taxes of which the vast majority I think 70 percent goes to the school system. But the school will tell you it costs between $8,000 and $9,000 per child to educate a kid, so if you just do the math, it doesn't quite work out.”

But, he says it’s not too late for things to start turning around.

“As a realtor, I don't want to see people move out of here,” he said. “I think we need to slow it more to sustainable levels. Instead of building cookie-cutter homes all over the place, let's slow that down and let the schools play catch-up and let the roads play catch up, and put an emphasis, which we are now I think, on bringing quality business here. We have a lot of people here. We are highly educated. And these people should be able to work here instead of going out of the county.”