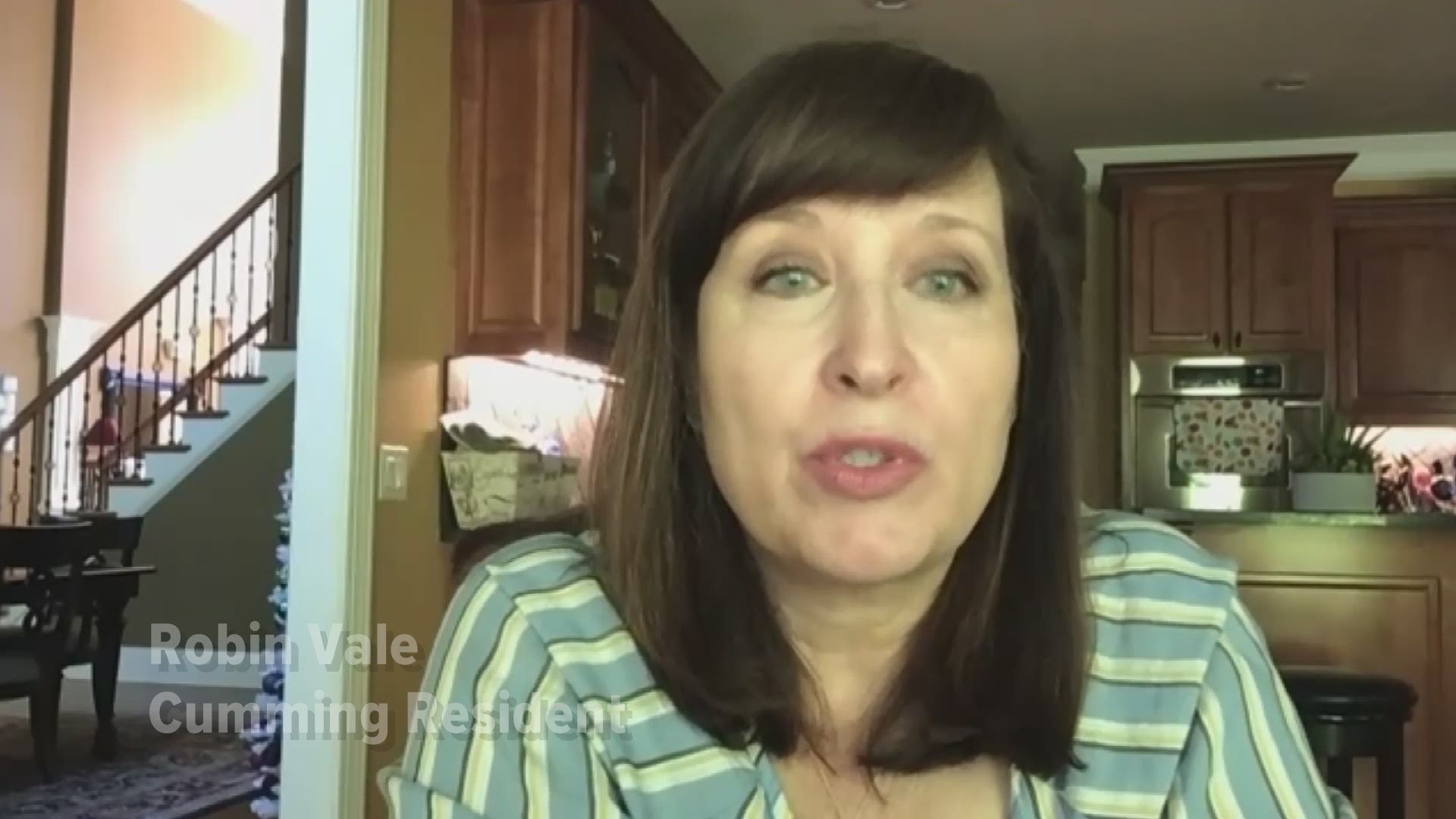 “It's a hobby that got a little out of hand, let's put it that way,” Vale said. “My kids were in marching band, Maureen’s kids as well. And so we started sewing the color guard flags, and it just kind of snowballed from there.”

“Every single flag that those bands used, that's what we did,” Nelson said. “We were the flag moms!”

Their children have since graduated, but the sewing never stopped. Nelson said she even started an Etsy business online and admits she has a weakness for certain materials.

For Vale, sewing nowadays is mostly hobby-based, she said. Or at least it was until last month when she got a call from her sister, Tracey.

“She works at a major New York hospital, and she's a manager of X-ray,” Vale said. “She was worried about her staff because they're in the thick of it, and they've been in the thick of it for quite some time. She asked me if I would make some fabric masks that her staff could put over they're n95 masks to extend the life of them a little bit, and to also use for commuting to and from work. So I found a pattern online, made a prototype, and sent it up to her. She got it approved by her supervisor, and then I just jumped into production.”

That was March 23, Vale said. She asked Nelson for help, and both ladies have been making masks ever since, despite a few challenges.

“We could probably do a lot better if we were not social distancing,” Nelson said. “We could do an assembly line kind of thing. So we've been doing covert drops on doorsteps of supplies and delivery of masks.”

Vale also recruited her children to help. One of them is making masks in Macon, GA while the other is doing her part in Minot, ND.

“We're all just doing what we can where we can,” Vale said.

Nelson said she’s more than happy to help her friend. She’s also been sending masks to her own family members as the requests roll in.

“My brother was like ‘how am I going to go into the grocery store? They want us to wear masks.’ And I said ‘alright, I've got you covered.’ Then my cousin from New Jersey called me. Her husband was homesick. She texted me and said ‘listen, are you making masks?’ And I said ‘as we speak!’ I told her ‘if I send you a mask, you’ve got to send me a picture.’ I figure I will make myself a little scrapbook someday.”

Vale said about 400 masks have already been sent to the hospital where her sister works, and she’s not planning to slow down her production anytime soon.

“I have the luxury to be able to spend a day just in my office sewing and sewing and sewing,” she said. “It makes me feel like I'm contributing beyond staying home. I love to sew, so it's not a hardship for me at all, to just sit in there all day and make one thing after the other.”

“It seemed pretty overwhelming at first, but it has helped me mentally go through day by day,” Nelson said. “The days are not dragging. I'm keeping busy. I feel like I've got a purpose. Everyone keeps saying ‘I'll pay you for the mask.’ But I can't sell them right now. I'm not there yet. I just want to make sure everybody is okay.”