Shadow Warriors and community members helped donate $10,000 so the 99-year-old woman could pay rent at her assisted living facility. 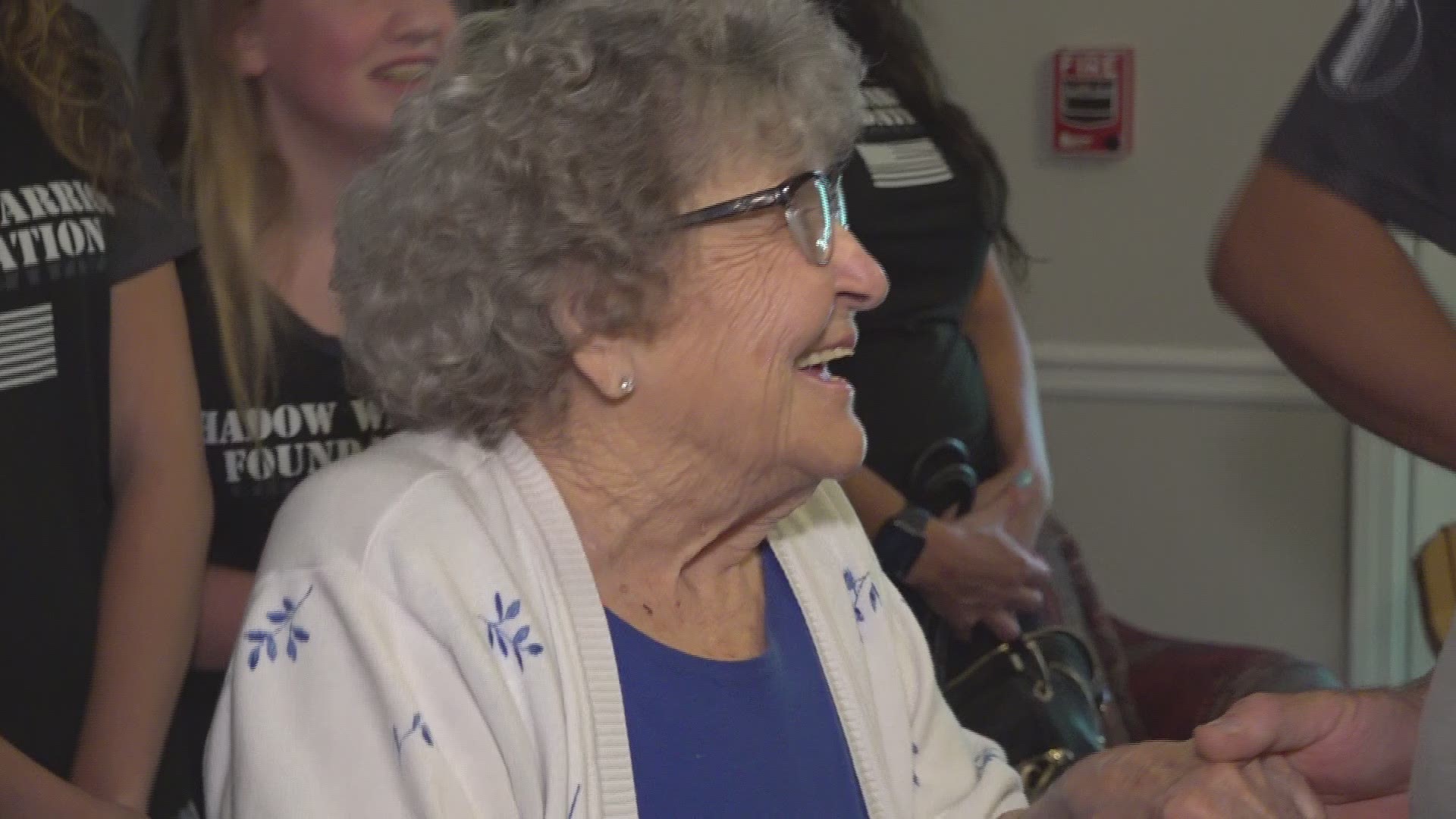 The funds, which were raised in a single day by the Shadow Warriors Foundation and various donors in Forsyth County, would not have been necessary if Rytkonen had received her benefits from Veterans Affairs.

“I took guardianship of my mom back in October of [20]18, and we filed then,” Bob Kaley, Rytkonen’s son, and a Forsyth County firefighter, said, “In April of this year, [the VA] said they needed us to re-file.”

More time passed, and eventually, rent was due at The Oaks.

“She loves it here, she's got all her friends here,” Kaley said. “I love her with all my heart, and moving her somewhere else was not an option.”

He says workers at The Oaks have been helpful throughout this challenging process, but the biggest help came from the Shadow Warrior Foundation, a Cumming-based organization that helps homeless vets.

“I put out a message on Facebook saying ‘does anybody know how to expedite processes inside the VA and how to get paperwork going?’ because it has a tendency to drag,” Ryan Hepworth, founder of Shadow Warriors, said. “It's close to my heart, and it did not sit well. I knew the team would be on board with it immediately.”

All the while, Georgia State Senator Greg Dolezal became familiar with the situation and

“There are stories in life that just move you because they are compelling,” Dolezal said. “You see the story of a 99-year-old veteran who served our country in WWII, turns 100-years-old on January 1, 2020, and has a problem getting VA payments, was facing potential eviction.”

Dolezal says he reached out to the Shadow Warrior Foundation to make sure the story was legitimate. Then, he used social media to ask for help.

While all this was happening, a representative from Senator Rob Woodall’s office started helping with the VA claim.

“Within 7 hours, I had notification that her benefits were going to be paid,” Kaley said. “And this is a fight I’ve been fighting since October.”

“That's probably the quickest turnaround I’ve ever seen a VA claim to be processed,” Hepworth said. “It was almost instant.”

Rytkonen is still waiting for her benefits, but she says she is forever grateful to those who helped out recently.

“It's the most generous thing that's ever been done,” Rytkonen said. “I would especially like to thank the organization that is helping me which is the Shadow Warrior Foundation. They are the ones that got the movement going so that I could stay here and finish my life here.”

Kaley is also expressing his gratitude and says he plans to pay it forward.

“This has opened my eyes and I will be a fighter for somebody else,” he said. “There's got to be a way, with enough said and enough ears and enough stomping of the feet or whatever it takes, to fix this broken system.”

“The system needs reformed,” Dolezal said. “That's something that's on the elected officials' shoulders to figure out. In the meantime, it's beautiful to see the community step in and bridge the gap when they see a gap.”

To learn more about the Shadow Warrior Foundation, CLICK HERE.