A local high school graduate is finding success, despite a few setbacks her senior year. 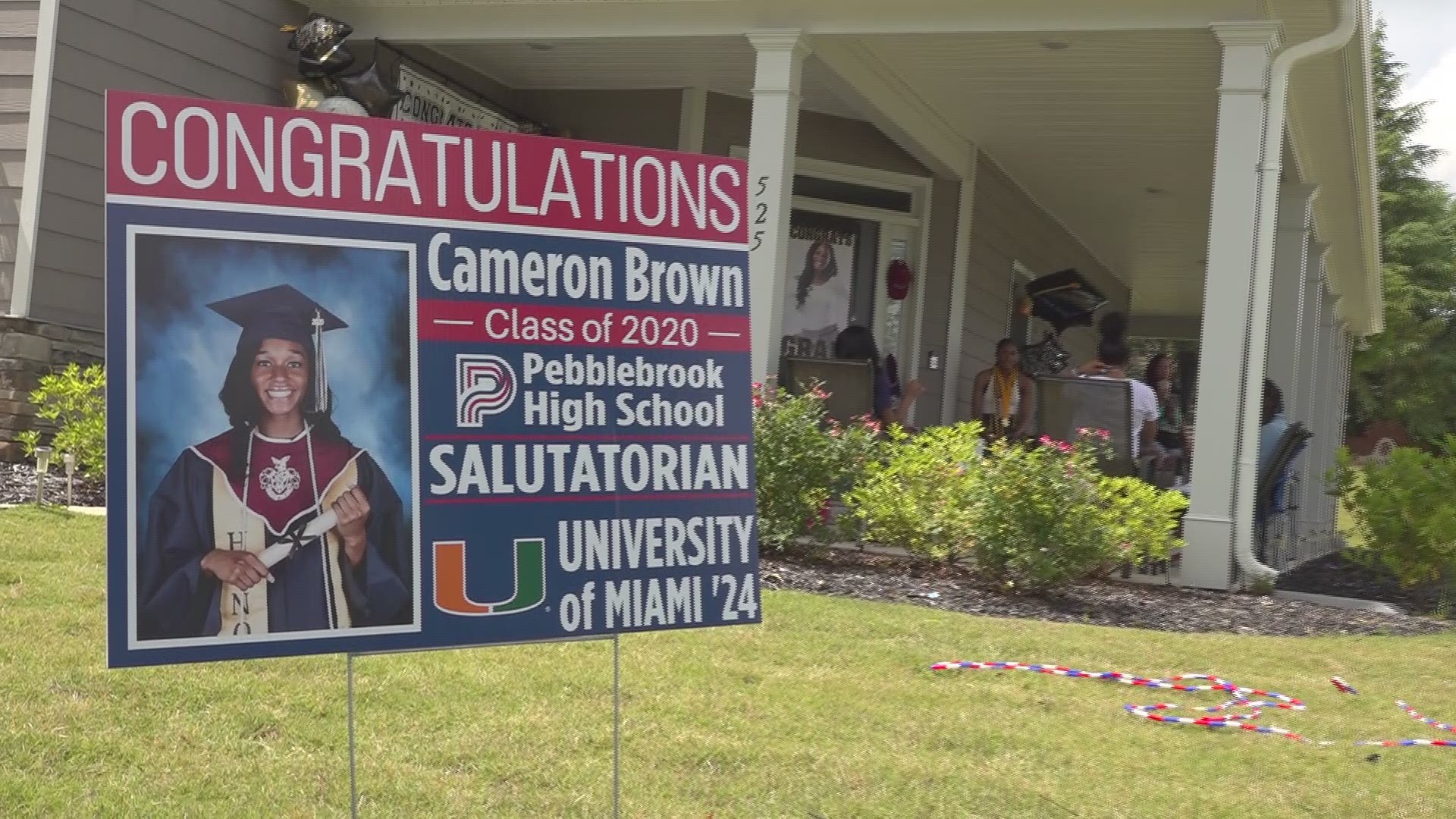 EAST COBB, Ga. — Life is good for Cameron Brown. The teen has received numerous accolades in recent months, including being named Cobb County’s Most Positive Athlete for Girls Basketball and Female Athlete of the Year for Pebblebrook High School. But she’s not just a successful athlete. Two weeks ago, Cameron was named salutatorian of Pebblebrook High School, an honor her mom says she’s been working toward for many years.

“It was a goal she made attending one of her cousin's graduations,” Starr Smith, Cameron’s mom, said. “When the salutatorian and the valedictorian got up to speak, she asked why they got to speak. So we explained to her what they were, that they had good grades, they've never seen a B, and she said ‘okay, I'm going to do that.’ And I said ‘why?’ And she said ‘because I want to be the one getting up there to speak.’ And that's been her goal ever since she was 10.”

Sadly, there may be no graduation at which Cameron can speak – or at least no physical graduation. Cobb County schools were forced to shut down in March amid the coronavirus pandemic, and there’s still no word on what’s happening with local graduation ceremonies, which could end up taking place on a virtual platform.

“Senior year was more than just the pandemic for us,” Cameron said. “We got a new principal at the beginning of this year. For three, years we had the same principle, and then boom, new principal and new administration. It was kind of like a new everything. So we kind of felt like, as seniors, we were already starting from scratch with new people in charge.”

“There are a lot of things that Cameron built, in anticipation for the activities that go on as a senior,” Raymond Brown, Cameron’s dad, said. “So there are certain events that she skipped as a junior that she could have gone to because she really was excited about her senior year.”

Cameron said some of the traditions she and the other seniors were looking forward to never happened because the new administration did away with the traditions. As if that wasn’t bad enough, she said, everything came to a stop in the last few months of their senior year.

“In mid-March, coronavirus wasn't really talked about a lot,” Cameron said. “I was in my yearbook class and they were like ‘there's a case in Washington. They're talking about possibly closing school.’ And we were like ‘they're not closing school. It's not even going to get here.’ And then the next day they said ‘starting Friday, March 13, we will not be continuing.’”

They thought they would be coming back before the end of the year, she said. But the schools never reopened.

“They sent the tweet out saying Cobb County Schools will not continue, and that's when it really hit all of us that we had our last day at school without knowing it was our last day of school,” she said. “We did not have that traditional ‘okay, say goodbye to everybody, get everybody to sign your yearbook, take pictures with everybody before we leave.’ We kind of just ended the school year abruptly without knowing anything.”

Her senior prom was canceled just days before the event, as were all school activities. Adding insult to injury, Cameron said her class rank had dropped significantly according to the transcripts released before second semester.

“I was teetering between one and two for the past few years, but now my rank was like five or six,” she said. “I went to my mom and I was crying. I was like ‘I don't know how I'm going to get back up to where I wanted to be.”

“She really did think about giving up, because she could have graduated last year with the credits that she had,” Starr said. “And I was like ‘you need to pray about it,’ and her grandma told her the same thing. The next day she was like ‘I'm going to continue. I'm going to do the best that I can and give it my all.’ I said ‘you never know what God has in store for you. You may just rise back up, and that's exactly what happened.’”

Cameron’s final GPA was 4.317. Not only were her academic accomplishments recognized locally. They also caught the attention of colleges around the country.

“She received a full academic scholarship to the University of Miami,” Brown said. “She got accepted to all 13 colleges that she applied to. She also got accepted to two schools that she never applied to. She just received acceptance letters. It came down to UNC-Chapel Hill, UGA, and Miami. But when Miami sent the financial package that they were going to provide for her, she said it was a no-brainer.”

Cameron said she’s planning to study exercise science and public health. Her goal, she said, is to be a pediatric or orthopedic surgeon. She said she attributes her success to her faith and to a personal drive to be the best she can be. She also has advice for anyone else struggling.

“I really was discouraged, and I really was on the brink of giving up, but I did not,” she said. “My advice is keep going, even if you don't know the reason why. Keep going, keep pushing, keep following your plan, because sometimes things will be revealed to you along the way or will be revealed to you at the end of the tunnel. You can't necessarily see it when you feel like you're facing an obstacle. You don't necessarily see the light at the end of the tunnel, but when you get there, it's beautiful. Put your trust in God, as well, because that is really what helped me. Those are my two pieces of advice - keep going, even when you think you're going to fail, and trust God.”