A Cobb County woman is creating larger-than-life artwork on her driveway, and the photos are incredible. 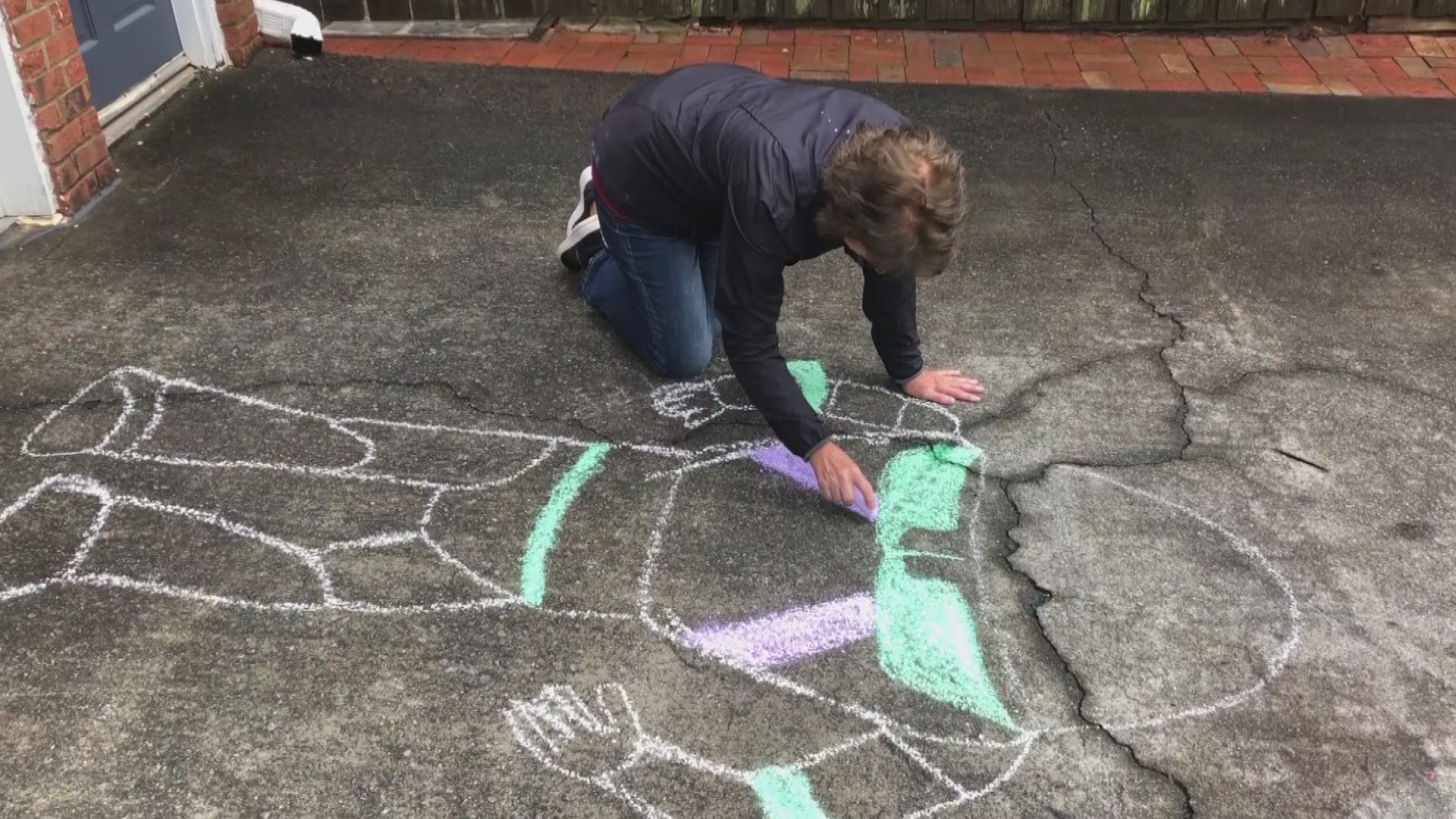 EAST COBB, Ga. — Kathy Wood of Marietta is creating original art on a daily basis, and she’s using her driveway as a canvas.

“Two or three weeks ago, my son, just out of boredom, wrote a little chalk message, a little hello to his niece and nephew,” Wood said. “They wrote one back to him, and I thought that was fun. So I looked in the cupboard, saw that I had some chalk, and I decided that I would try to make some fun pictures that I could insert myself into.”

She said that was the beginning of a new hobby - chalk art. Once each of her creations is done, Wood said she has her husband capture the moment.

“My husband, Jerry, hangs out of a third-story window and pretty much looks straight down with the camera,” she said. “For most of my poses, I'm lying on my back or my side, so it looks like you're in the picture when you take it from up above.”

Thanks to precise positioning and the perfect camera angle, Wood has created some action-packed photos. In one picture, she’s being shot from a cannon. In another, she’s slaying a fire-breathing dragon. And that’s only the beginning of the interactive chalk art series which now includes more a dozen photos.

“I tried to make pictures that I knew weren't possible for me, like dunking a basketball and doing a handstand on a balance beam,” Wood said. “I started out just trying to do stuff that was funny, just trying to get a laugh out of my friends.”

Wood said she started uploading the humorous images to social media and was pleased with the response.

“At first I just thought the grandkids would get a kick out of it, and my friends would laugh with me,” she said. “But friends have sent it to friends, and my relatives all over the United States, they've shared it with their friends who have shared it. So I'm very surprised.”

Wood, who’s been doing this daily for the past few weeks, said she plans to continue doing this while Georgia remains under a stay-at-home order. She was finally able to stock up on chalk, after having to get creative a couple of weeks ago.

“Once in a while you'll get a package that has one stick of the dark gray color, and it's very hard to find,” she said. “And you need that for details, for eyes, for outlining some things. So I thought ‘what can I use? What’s around the house that's black that I could use?’ So I thought and thought and finally came up with using charcoal briquettes as my black chalk. It's a little rough on the hands. They're not soft. You have to scrape a lot to get the black color, but that's the only thing I could come up with.”

Wood said she even has a weather contingency plan.

“Some days I do two-a-day to give myself a rain date, in case it rains,” she said. “So I hose it down right away and usually start on the next one.”